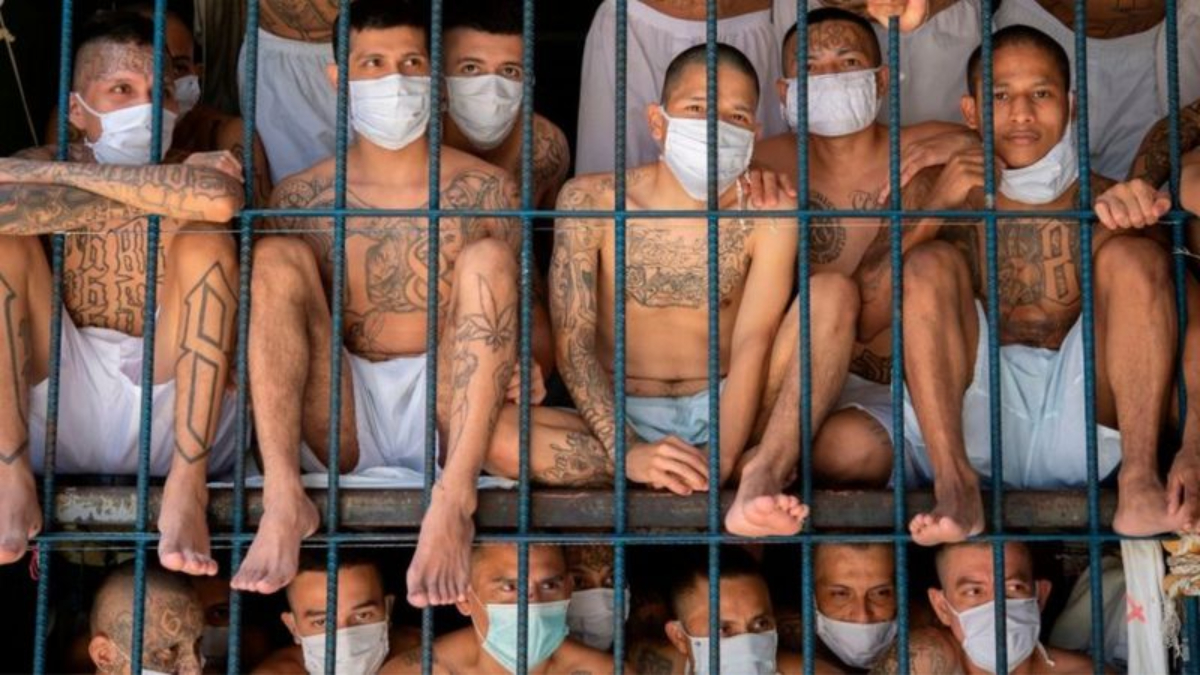 The recent prison massacre in Ecuador – the worst in the history of that country, which left at least 119 dead – has once again put the spotlight on the problem of prison overcrowding.

Many experts have highlighted that the prison occupancy rate in Ecuador, from 133%, was one of the factors that triggered the tragedy.

The 52 Ecuadorian prisons house more than 39,000 inmates, about 10,000 more than can fit, according to official prison capacity figures.

The riot in Guayaquil was the third to be recorded in an Ecuadorian prison so far in 2021, after those that occurred in February and July, which left 79 and 22 dead, respectively.

However, the South American country it is far from being the one with the most crowded prisons region of.

Ecuador is not even in the “top 10” of the Latin American and Caribbean countries with the most overcrowded prisons.

In a ranking of the World Prison Brief (WPB), the world’s leading database on prison matters, which is compiled by the Institute for Crime and Justice Policy Research (ICPR) in the United Kingdom, Ecuador It is ranked number 18 in the region. 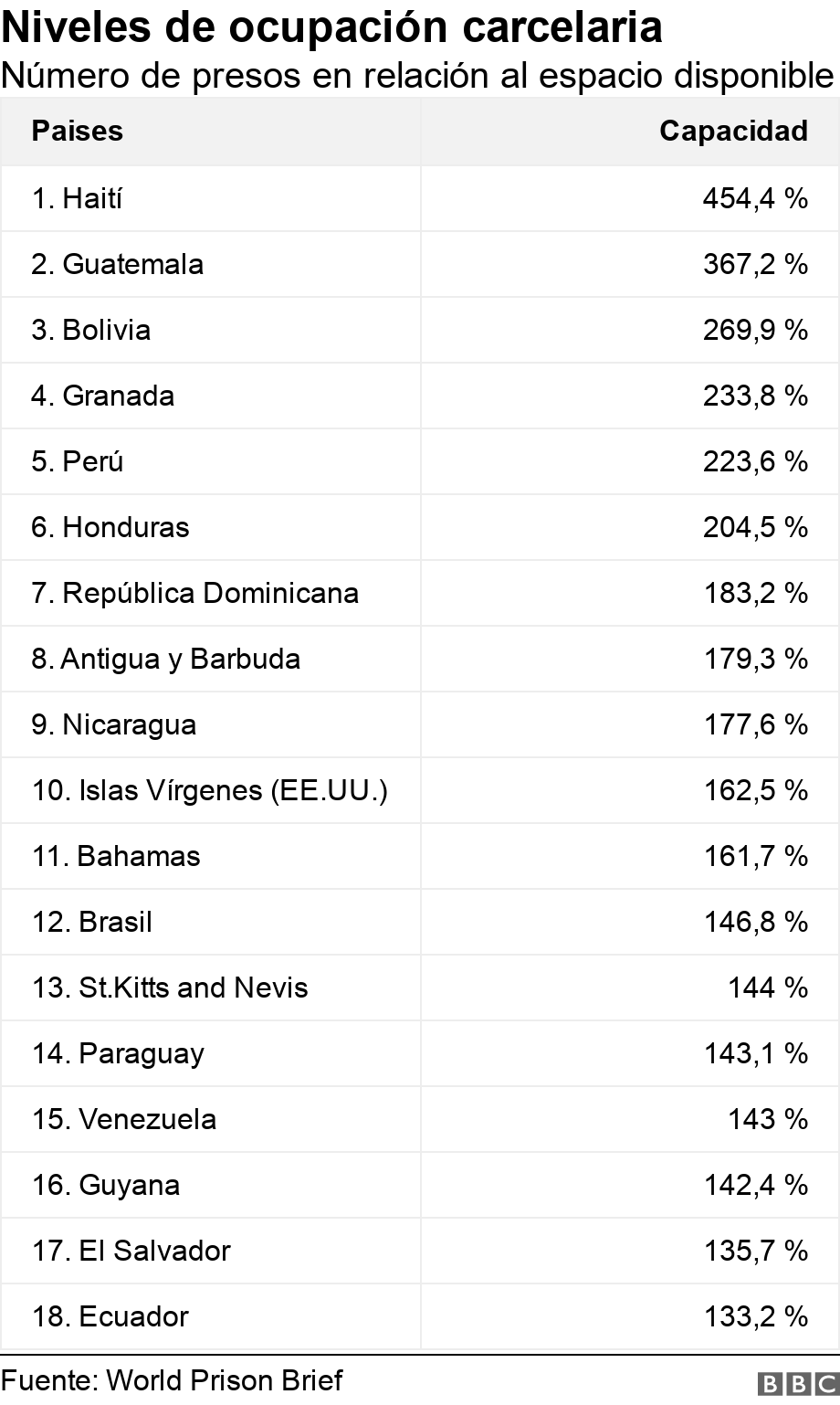 To get an idea of ​​the dimension of the problem, it is enough to observe that only one country in South America does not have its prisons packed: Suriname, the least populated nation in the subcontinent, where the prison occupancy rate reaches 75.2%.

Something similar happens in Central America: there only Belize avoids overpopulation, with a rate of just 49.8%, and Mexico follows with 101.8%.

But what is most striking about the ranking is not only that the vast majority of Latin American countries exceed, and by far, 100% of the capacity of their prisons (the ICPR estimates that the regional average occupancy is 160%).

But, in addition, in some countries -as can be seen in the table above- the occupancy rate is two, three and even four times higher than the capacity.

There are six nations where the number of prisoners is double, triple or quadruple the space that exists to house them.

The one with the worst situation, by far, is Haiti, the poorest country in the American continent, which has a prison occupation of 454.4%.

It is followed by Guatemala, which triples the capacity of its prison system, with the 367.2% occupation, and Bolivia, with 269.9%.

These three nations are among the ten worst overpopulated in the world.

Granada (233.8%), Peru (223.6%) and Honduras (204.5%) complete the table of Latin American and Caribbean countries with prison populations that double the available space.

Why do these countries, and Latin America in general, have such a big problem of prison overcrowding?

Experts with whom BBC Mundo spoke affirm that, although each nation has its own particular problems, there are a series of factors that are repeated and that explain this phenomenon at the regional level.

It is not the lack of prisons

Surely the first thing you thought is that the main problem is that not enough prisons have been built.

And you are right, in part. Clearly the growth of the prison population has been much greater, and much faster, than the increase in infrastructure works to contain it.

But the scholars of the matter assure that building more prisons would not solve the problem overcrowding.

“We know that the more prisons that are built, the more they will be filled. Judges are always under pressure in that regard, ”says Sacha Darke, an adjunct professor in Criminology at the University of Westminster, UK, who specializes in prison systems in Latin America.

He highlights that the prison population in the region has practically tripled since 2000, and calls Latin America the “new mass incarceration zone.”

“Gonna overtake North America“, He says, referring to the region with the most prisoners in the world (although without a problem of overcrowding, due to a vast prison network).

Today the United States has the largest prison population on the planet, both in total population (more than 2 million), and in prisoner rate per number of population (629 prisoners per 100,000 inhabitants).

There are more people in US prisons than in all the countries of Latin America and the Caribbean together.

But the academic emphasizes that, while the United States reached that record of 2 million inmates more than two decades ago – and since then the number has not grown – during the same period in Latin America the number of prisoners passed 650,000 to 1.7 million.

“In a while the figures for North America are going to pale next to those of Latin America, particularly those of South America,” he predicts.

An ICPR report shows that between 2000 and 2018 the world prison population grew by 24%, in line with the growth of the general population. But in South America the increase was 175%.

Today that region is home to 1.3 million prisoners.

But why has the number of people imprisoned in that region grown so much?

That is the key question to understand what’s behind the growing prison overcrowding, experts say.

“The main problem It is from criminal justice, not from the prison system, it does not decide who is there, ”César Muñoz, senior researcher in the Latin America department of Human Rights Watch (HRW), tells BBC Mundo.

Muñoz points to two specific shortcomings of justice: his slowness and its “excessive use of preventive prison“.

The WPB figures speak volumes about the latter: in Haiti, for example, 81.9% of prisoners are detained without trial.

On average, more than 40% of inmates in South America are incarcerated without a sentence.

In Central America, the average figure is 35%.

If we add to that the fact that judicial processes in most of the countries of the region they take years, one begins to understand why prisons are filling up and exceeding their capacity.

But to all this is added a more recent phenomenon that is key to understanding why Latin American prisoners have multiplied in so few years, specialists say.

“Today one of the main reasons for being in jail is selling drugsDarke says.

“But most of the people arrested are not drug traffickers, but young people who mediate between those who sell and buy,” he says, referring to what is commonly called “drug retailing.”

“In Latin America, everyone who sells drugs is called a trafficker, but in Europe they only call those who are at the top,” he observes.

The British academic highlights that in his country, retail -also called micro-trafficking- is not punished with prison, and that this is the reason why “the prison population in Latin America is much younger than that of Europe“.

Darke, like Muñoz, believe that this anti-drug policy not only it is ineffective (“In a market of supply and demand, there will always be another person willing to sell”, they agree), but also has the opposite effect to the wanted.

“It is counterproductive to fill the prisons with people who are arrested selling small amounts of drugs on the street,” says the HRW investigator.

“Putting these people, either with preventive detention or with a conviction, in prisons that are controlled by criminal groups at the end public safety worsens, because they will be in real crime colleges“, Explain.

The clashes between the criminal groups that control the prisons are what led to the prison massacres in Ecuador, and recent riots in several other countries in the region, such as Peru, Venezuela and Brazil.

Experts warn that crowding plays a key role in the power of the gangs.

“Prison overcrowding favors the growth of criminal networks because there is less state control,” says Muñoz.

And he gives an example: “If you have a cell that is for five people, but there are 30, the guards cannot maintain control there. So overcrowding favors the growth of criminal groups. “

“Prisons are a very important element of these networks,” he adds. “Why are a recruiting place“.

“In fact, in the region we have many cases of criminal groups that they were created in prisons and then they carried out illicit businesses outside the prisons, ”he highlights, giving as an example the largest criminal organization in Brazil, the First Capital Command (PCC).

Darke, for his part, says that in many countries prison authorities “need gangs to organize the running of the prison.”

“In some places these bands even are designated by the prison system to keep order ”, he assures.

He calls it a “co-government“.

“When you don’t give resources to the prison system and you don’t have the necessary staff, it is quite natural for the people who work there, and cannot manage the prison, to seek the collaboration of the prisoners,” he explains.

What is the solution to avoid this vicious circle, which, far from avoiding crime, perpetuates it?

“Must invest in crime prevention, rather than responding to crime, “suggests Muñoz.

“It is a change in mentality that would be fundamental in Latin America.”