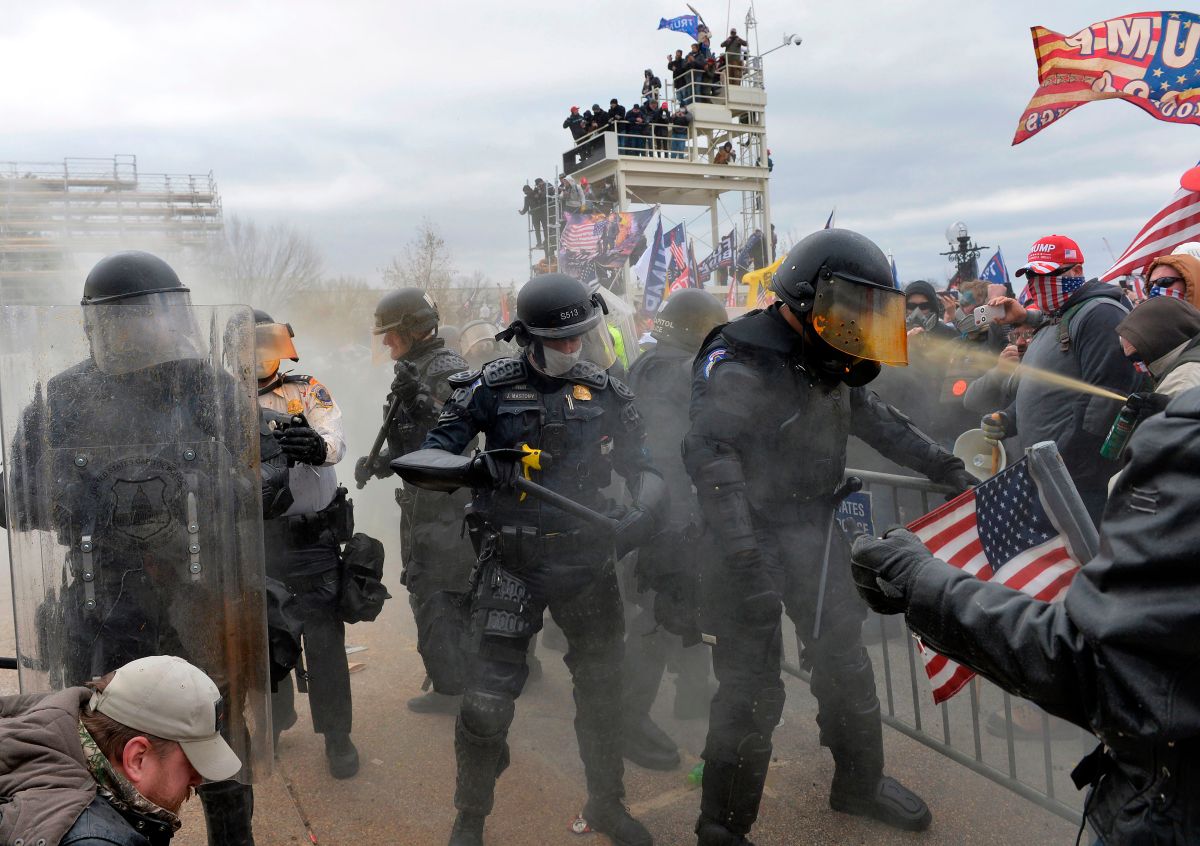 In the chaotic minutes before Ashli ​​Babbitt was fatally shot during the assault on the Capitol on January 6, Lt. Michael Byrd thought only of the glass doors leading into the lobby of the House of Representatives compound.

There between 60 and 80 representatives were hiding together with their advisers and Byrd’s job was to protect them.

As the mob took over the headquarters of Congress, Byrd and some other Capitol Police officers erected a barricade with furniture in front of the gates.

“When we lock the doors, we basically get stuck where we were,” Byrd said in an exclusive interview with television host Lester Holt of our sister network NBC News, speaking publicly for the first time since the riot. “There was no way to withdraw. There is no other way out, “he added.

“If they get through that door, they’ll get right to members of Congress,” reasoned Byrd, who gave NBC News permission to use his name after authorities declined to reveal it.

Byrd learned what was happening outside on his police radio. For several minutes, he listened with a cascade of alarming messages.

“Officer down,” he heard yelling. His companions attacked by rioters with chemical agents also screamed in pain. He even heard a report from an agent whose fingertips had been blown off.

“They got it on the air, literally,” Byrd said, “I said to myself, ‘Okay, this is getting serious.”.

Soon a horde of raiders arrived. Byrd, a 28-year veteran working for the Capitol Police, drew his gun and took a defensive stance as the mob smashed through the glass doors.

He claims that he yelled at them several times to come back. But the assailants kept advancing, and then only one of them tried to get through one of the doors.

What happened next was captured on video: Byrd fired a shot, hitting Babbitt in the shoulder.

Babbitt, 35, an Air Force veteran and a fervent supporter of former President Donald Trump, fell to the ground. He died from his injuries later.

His death became a political campaign motif for the far right, which described Babbitt as a martyr. Trump himself declared that she had been murdered and falsely suggested that the officer who shot her worked for a high-ranking Democrat.

For Byrd, who is black, the incident turned his life upside down. He has been in hiding for months after receiving an avalanche of death threats and racist attacks, They started when his name was leaked on right-wing websites.

But in his interview with Holt, Byrd says he has no doubt that he made the right decision in light of the circumstances.

“I know I saved countless lives that day,” Byrd said. “I know that members of Congress, as well as my fellow officers and staff, were in danger and in grave danger. And that’s my job, “he said.

Byrd said he did not know if the person he shot was carrying a weapon. Later he learned that the instigator was an unarmed woman.

When asked why he pulled the trigger, Byrd explained that it was his “last resort.”

“I tried to wait as long as I could,” he told Holt. “I was hoping and praying that no one tried to enter those doors. But its non-compliance forced me to take the appropriate measures to save the lives of members of Congress and myself and my colleagues, “he added.

The days before January 6 were nothing extraordinary for Byrd, a native of Washington D.C. He met with other Capitol Police officers to review the security plan for the certification of Joe Biden‘s victory in the presidential election .

“We did not receive specific information that would force us to change or adjust our posture. At the time, it felt like a routine event that I had done for the last 28 years of my career, “he explained.

Although Byrd recognized a complicating factor: fewer officers were under his command, largely due to absences related to COVID-19.

When hundreds of Trump supporters furious at the election results flocked to the Capitol, violent clashes with police were broadcast on television. But Byrd, who guarded the House of Representatives compound, could not look at them. It depended on his police radio.

When Byrd began hearing reports of downed officers, he was unaware of the extent of their injuries. At one point, Byrd said, an even more alarming message reached him on the radio: a shooting report, though he later learned it was false.

After hearing on the radio that the mob had entered the building, Byrt rushed into the compound and told members of the House of Representatives to hide under their chairs and stay away from doors and windows.

He informed them that they had found homemade bombs in the vicinity of the building and that the assailants were using weapons against the officers. “They need to collect their gas masks,” Byrd told them.

And he gave one more instruction: asked members of the lower house to do something to hide their identity in case they came face to face with Trump supporters.

“One of the things that was imperative to inform members was that the pins that identified them be removed,” Byrd said. “To remove their jackets, to look like the staff as much as possible,” he added.

When Byrd ran out of the room, he saw that the lower house chaplain had begun to say a prayer with the members of Congress.

“I think it was at that time [que] Congressmen also began to believe that they could be seriously injured or harmed, ”Byrd said.

So Byrd and the other officers in the compound quickly barricaded in front of the glass doors with all the furniture they could find.

“That’s when I realized they were here,” Byrd said, referring to the assailants. “The chants got louder. I couldn’t understand what they were saying, but it sounded like there were hundreds of people outside that door, “he said.

A video recorded by one person in the crowd shows two officers posted in front of the door. Much outnumbered, they end up stepping aside.

According to Byrd, he did not know those two policemen were there and he also could not see the hundreds of Trump supporters behind the door because the stacked furniture obstructed his view. He also didn’t know if they were armed or not.

“It was impossible for me to see what was on the other side,” he explained.

Who he did see was a person, Babbitt, who was trying to get through the broken glass.

“I couldn’t fully see his hands or what was in his backpack nor could I know what his intentions were. But before that they had been violent, “Byrd said.

In his 28 years of service that was the first time Byrd fired his gun. In the next few minutes, he helped the representatives and their assistants out of the building. It wasn’t until later that night, when he watched the news on television, that he was able to understand the extent of the disturbances on Capitol Hill.

Babbitt’s family lawyer described the incident as an “ambush,” claiming that the officer did not give any warning before shooting. Babbitt’s family has indicated their intention to file a civil lawsuit against the Capitol Police; he had previously presented court documents seeking the name of the officer who shot him.

The attorney, Terry Roberts, did not respond to a request for comment from NBC News.

Byrd says his throat hurt for several days from the screams he had given to ask the assailants to stop and step back while they were banging on the glass doors.

Byrd also scoffed at allegations that he had a political agenda..

“I do my work for the Republicans, for the Democrats, for the whites, for the blacks, reds, blues, greens. I don’t care about your affiliation, ”he said.

When Trump was president, Byrd explained, he accompanied him through the Capitol on numerous occasions. “If he were on Capitol Hill and I was responsible for him, I would do the same for him and his family,” he said.

In the days after January 6, Byrd’s name leaked into right-wing media and online forums. Then came the threats.

“They talked about killing me, cutting off my head “Byrd said, adding that there were also racist attacks.

“Everything is disheartening, because I know I was doing my job,” he said.

But the hardest part has been the effect that has had on her family. A tear slid down his right cheek as he lamented how the life he built with so much effort has changed.

“Sometimes, you can’t do anything but cry,” Byrd said, his voice growing heavier. “You felt like you did your job. You helped protect the legislative leaders of this country and you fought for democracy and to keep them established. “

An incident that Byrd had several years ago has also garnered renewed attention online: In 2019, he left his service weapon in a bathroom, where it was finally discovered by another officer.

In the NBC News interview, Byrd described the incident as a “terrible mistake.”

“I recognized it. They penalized me for it. I kept going, ”he explained.

After being silent for seven months while the investigations were carried out, Byrd claimed that wanted to speak up to counter misrepresentations of his actions, even if doing so exposes him to more threats and hatred.

“It is something that is scary. Once again, I think I showed a lot of courage on January 6, and it’s time I did it again, ”he said.

You know there are people who disagree with your actions and who probably never will.

“I hope they understand that I did my job. There was an imminent threat and danger to members of Congress. I just want the truth to be told, ”the officer explained.