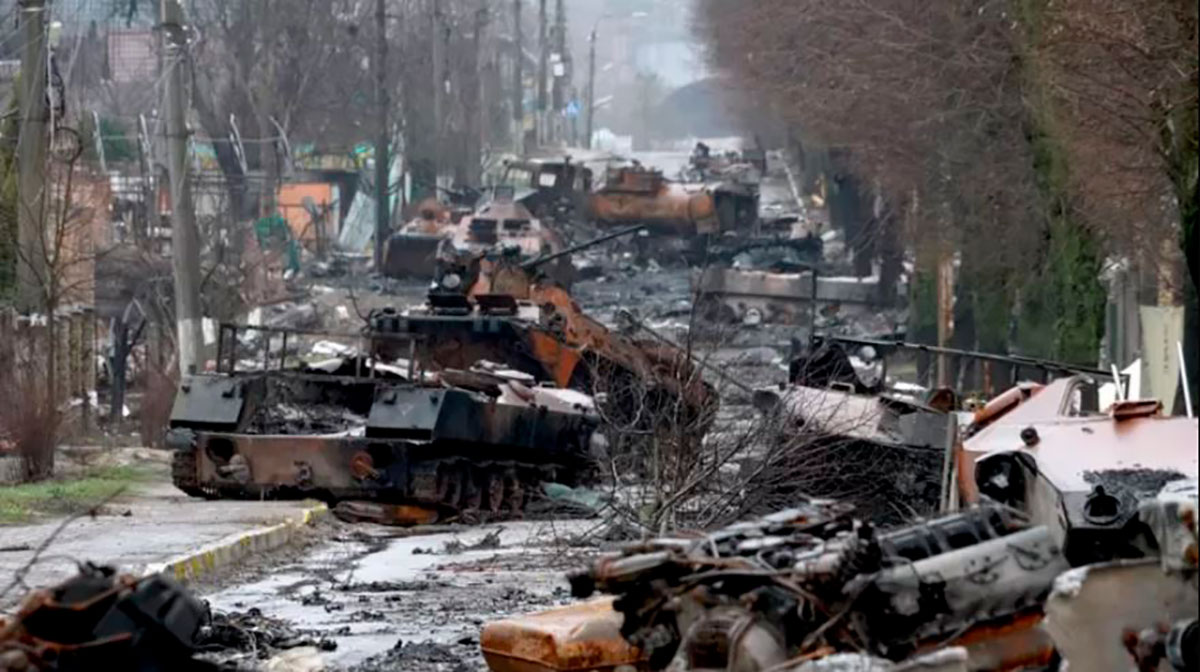 An avenue in the suburb of Bucha became the first place where Russia’s hopes of encircling and entering kyiv and trying to topple the government of Ukrainian President Volodymyr Zelensky were buried.

It happened two or three days after the first Russian forces crossed into Ukraine on February 24, when the Ukrainian military destroyed a column of Russian tanks and armored personnel carriers passing through the town of Bucha towards the capital, kyiv.

The convoy was destroyed in one of the first of many Ukrainian ambushes that stopped the Russian advance in its tracks.

Our BBC team was able to reach Bucha because the last Russian soldiers withdrew last Friday, as part of what the Kremlin has described as a calm and rational decision to concentrate the war in eastern Ukraine.

Moscow claims, without proof or reliability, that its objectives in central Ukraine have been achieved and that they never included the taking of kyiv.

The truth is that an unexpectedly fierce and well-organized Ukrainian resistance stopped them on the outskirts of the capital, and evidence of this includes the rusted and twisted remains of the column still lying where it was destroyed on that suburban street.

After two or three weeks of war, the russian invaders ran out of momentum. On the streets of Bucha can be seen.

The elite troops of the Russian airborne forces entered the town in armored vehicles light enough to be transported by plane.

They arrived from Hostomel airport, a few kilometers away, which was attacked and taken over by Russian paratroopers descending from helicopters on the first day of the invasion.

So the Ukrainian forces put up fierce resistance. When the column moved through Bucha on its way to kyiv, they had a rude awakening.

The road is narrow and straight, the ideal place for an ambush. Witnesses say the Ukrainians attacked the convoy with drones Bayractar that they bought from Turkey. Other locals indicated that Ukraine’s territorial defense volunteers were also in the area.

However they had managed it, the front and rear vehicles were destroyed, trapping those in the middle. The rubble has not been touched. Ammunition belts with 30mm shells lie on grassy edges, with many abandoned dangerous and damaged artillery pieces.

The young conscripts ran out, begging not to be handed over to the Ukrainian territorial defensesaid the locals.

A man in his 70s, who gave his name as Hrysta, said: “I felt sorry for them. They were so young, between 18 and 20 years old, with their whole lives ahead of them.”

corpses in the street

It seems as if the Russians, as they prepared for Bucha’s withdrawal, did not show the same compassion. there was at least 20 dead men in the street when the Ukrainian troops entered the village.

The mayor said they buried 280 people in mass graves.

The few civilians who remained said they tried to avoid crossing paths with the Russians. They lit fires in front of their Khrushchev-era buildings, cooking outdoors because gas, electricity and water had been cut off.

Volunteers are bringing in supplies from Lviv in western Ukraine, and from countries far removed from the war, at least geographically.

“This is the first bread I’ve eaten in 38 days,” said a woman named Maria, looking at a plastic bag with a few modest rolls inside. Her daughter Larysa gave me a tour of the Soviet-era residential building.

Many people who had gone to safer places, or outside, had their security doors bolted shut. The Russians opened them tearing them from the lintels concrete and jambs.

A few kilometers away, the trail of devastation leads to Homostel airport. Russian airborne troops tried to use them as a base for their advance towards kyiv.

The largest transport plane in the world was destroyed at the start. The roof of the huge hangar built to house it was pockmarked with a constellation of shrapnel holes. The plane, known by the Ukrainian word mriyawhich means dream, lies there broken from the back, with large pieces of fuselage and engines around it.

His fate is a reflection of what is happening to Ukraine. A enormous amount of national pride was invested in the construction of that aircraft, a symbol of Ukraine’s ability to carry out major projects around the world.