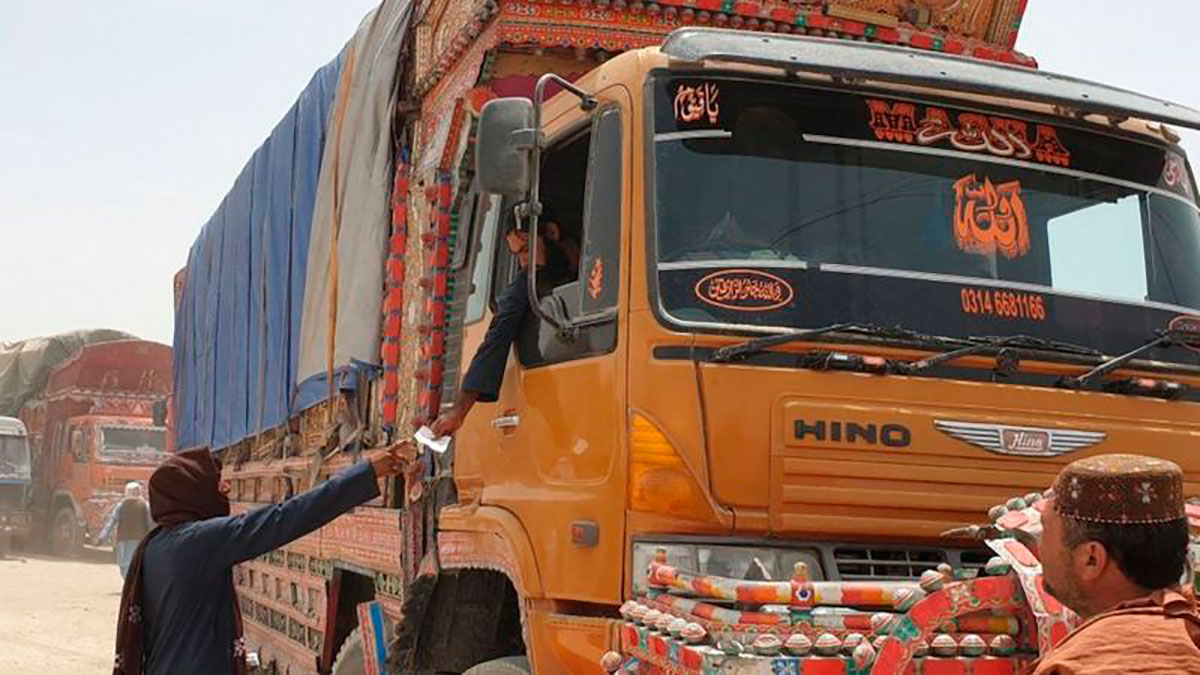 Afghanistan’s economy is “shaped by its fragility and dependence on aid,” says a World Bank report released earlier this year.

Although after two decades of the fall of the Taliban, living conditions in Afghanistan had improved, as well as its education and health system, the leaders never managed to strengthen the country’s formal economy or end its dependence on foreign aid, which finances the 75% of public spending.

Now, with the Taliban back in power, economic prospects are yet worst.

Foreign money is expected to stop flowing, hitting the state coffers hard. In 2019, the World Bank estimated that such aid was equal to 22% of its gross national income.

But those are only data from the formal economy, the one that is registered with the tax authorities.

In June, the UN published a report that ensures that “the main sources of financing for the Taliban continue to be criminal activities,” including “the drug traffic and poppy production (used to produce opium), extortion, kidnapping for ransom, mineral exploitation and income from informal tax collection in areas under Taliban control ”.

According to David Mansfield, it is precisely this last activity that generates the most money.

According to a study he led, published this month by the Overseas Development Institute, only in the province of Nimruz, near the borders with Iran and Pakistan, the collection of taxes to allow the passage of goods, including drugs, contributes close to US $ 235 million a year to both the Taliban and pro-government figures.

By way of comparison, the province received less than US $ 20 million of foreign aid per year. 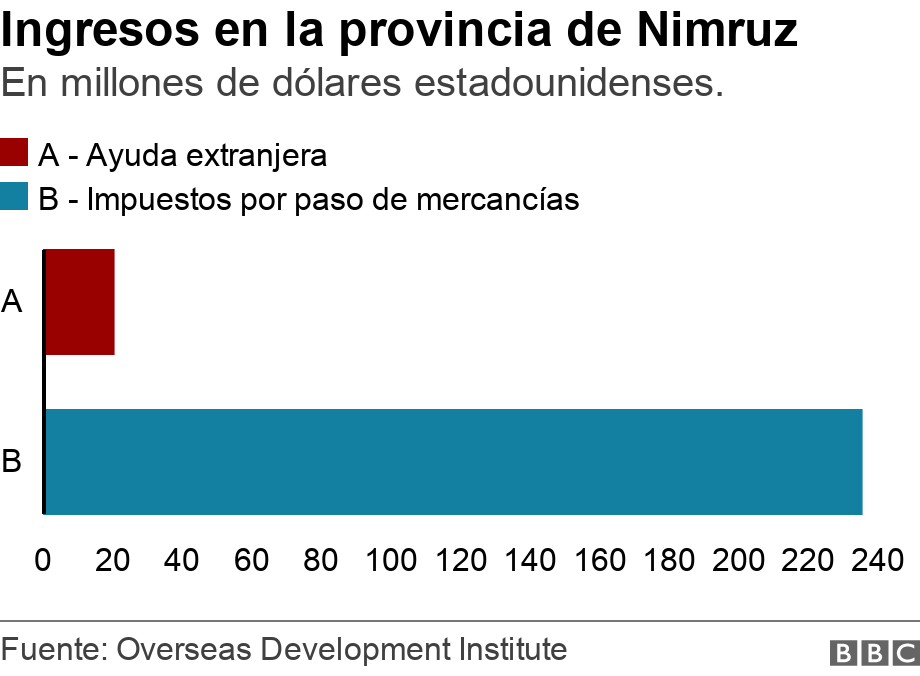 “It is the main source of income for the Taliban,” the analyst tells BBC Mundo.

And if we go back to reports published in the late 1990s, we can see that the main source of funding for the Taliban at that time it was also taxes collected from the transportation of goods and fuel ”, he continues.

The drug industry in Afghanistan is huge.

Afghan narcos control more than 80% of the world’s supply of opiumAccording to the United Nations Office on Drugs and Crime (UNODC), heroin made from Afghan opium is estimated to account for 95% of the market in Europe.

This agency, which monitors illicit crops around the world, estimated in a study published in 2019 that the opium economy generates between US $ 1,200 and US$ 2.1 billion annually, far more than the US $ 500 million a year that the United States provided in humanitarian aid before the Taliban took Kabul.

In 2018, UNODC noted that opium production contributed 11% of the country’s economy.

After the capture of Kabul, the Taliban spokesman, Zabihullah Mujahid, said that when they were in power “there was no drug production” and promised that they would return to “reduce opium cultivation to zero“.

His words contradict US State Department figures, which show poppy cultivation increased substantially under the command of the Taliban. It went from 41,000 hectares in 1998 to more than 64,000 in 2000.

This business is also an important source of employment in Afghanistan. In 2019, opium cultivation alone accounted for almost 120,000 jobs, according to the UNODC.

The US State Department estimates that the Taliban charge a 10% crop tax. There are reports that they also collect money from labs that turn opium into heroin, as well as from merchants who smuggle.

It should be noted that opium and its derivatives no they are the only drugs that drive the Afghan economy.

The Asian country is also one of the main producers of hashish in the world and also produces synthetic drugs such as methamphetamine.

David Mansfield, who has been investigating the Afghan illicit economy since 1997, says the tax collection system to allow goods through is much simpler.

“It works based on a fixed price that you have to pay depending on the weight, the volume or in some cases of an area unit ”, he adds.

“Charging 10% of the price for a certain merchandise would be impossible to constantly manage and calculate.”

So, he explains, the Taliban tax goods they can count rather than creating a price-based structure that can become complex.

“Them charge taxes for each truck, kilo, person… This is how the system works ”, insists the British analyst, highlighting that transporting goods in Afghanistan is extremely expensive.

Afghanistan is a country rich in minerals and precious stones. It has significant reserves of lithium, uranium, bauxite, copper, cobalt, coal, iron, marble, talc, in addition to oil and gas.

But it has not been able to properly exploit this wealth due to the war and most of the mineral extraction in Afghanistan is done on a small scale and illegally.

“According to our estimates, the potential value of mineral deposits ranges between US $ 1 trillion and US $ 3 trillion“Former Afghan Mines Minister Wahidullah Shahrani told the BBC in 2010.

At the end of 2020, a report on the extraction of minerals in Afghanistan published by the UN assured that the country could collect more than US $ 100 million annually only through royalties and mineral export tariffs.

But, according to the report, this had not been possible because the control of mineral extraction was mainly in the hands of groups like the Taliban and the Islamic State, as well as local militias, drug lords and some security forces.

In recent years, tax revenue from mineral resources accounted for less than 2% of the Afghan government’s total revenue, or about US $ 42 million annually.

Corruption is another major factor that hinders the exploitation of the many mineral resources in Afghanistan and the distribution of wealth.

Afghanistan is one of the most corrupt countries of the world. It ranks 165th out of 180 countries in Transparency International’s Corruption Perceptions Index.

According to a 2018 Global Witness investigation, both the Taliban and the self-styled Islamic State have profited from corruption and mismanagement of the country’s wealth.

The NGO that works to break the links between the exploitation of natural resources, poverty, corruption and human rights abuses estimated that the Taliban earn between $ 2.5 million and $ 10 million a year from the talc extraction.

But corruption is not limited to small groups, it is truly endemic. 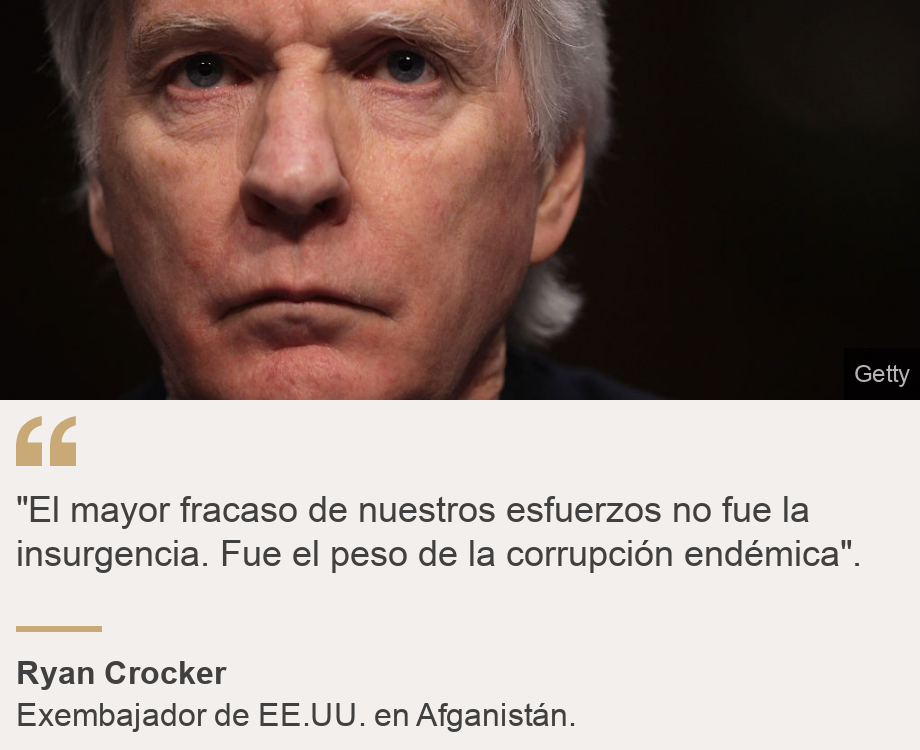 In 2013, the former president of Afghanistan, Hamid Karzai, admitted that the CIA had handed him over to cash bags to his office for years, adding that it was “nothing unusual.”

A report published in early August by the Inspector General for Reconstruction of Afghanistan (Sigar), a figure created in 2008 by the US Congress, concludes that the US government “underestimated” the amount of time needed to rebuild the country.

It also created “unrealistic deadlines and expectations that they prioritized spending quickly ”, which caused corruption to increase, according to the report of the government authority.

“The biggest failure of our efforts was not the insurgency. It was the weight of endemic corruption, ”Ryan Crocker, a former US ambassador to Afghanistan, told Sigar.

Most experts, including David Mansfield, do not believe that the Taliban will “reduce opium cultivation to zero,” as promised.

Nor do they trust that the new regime will succeed in ending corruption or attract foreign investment to exploit the country’s mineral resources.

On the contrary, Afghanistan’s economic income declines every day after the arrival of the Taliban.

On the one hand, Iran paralyzed all kinds of trade with Kabul, on a border that circulates billions of dollars a year, according to official figures.

On the other, the United States blocked the Taliban from accessing around US $ 7 billion of the US $ 9 billion of foreign reserves of the Central Bank of Afghanistan (DAB).

“We can say that the funds accessible to the Taliban are perhaps 0.1-0.2% of Afghanistan’s total international reserves. It’s not much, ”Ajmal Ahmady, former DAB president now in exile, tweeted.

Likewise, Germany announced the suspension of the sending of US $ 300 million in aid, while the International Monetary Fund froze the access to the country to some US $ 460 million of emergency reserves.

To access these all these funds, vital for an economy that finances 75% of its public spending with aid Foreign, the Taliban will have to negotiate with the United States or face an even deeper economic crisis, which will exacerbate the already catastrophic humanitarian crisis that the country is going through.

“Some have downplayed the economic problem by writing that the Taliban’s income from illegal mining, opium production or trade routes is large,” Ajmal Ahmady wrote in an opinion piece published in the Financial Times.

“The income of the Taliban from such sources could be considered relatively large to carry out an insurgency campaign. (But) they are totally inadequate to operate a government so it works”.