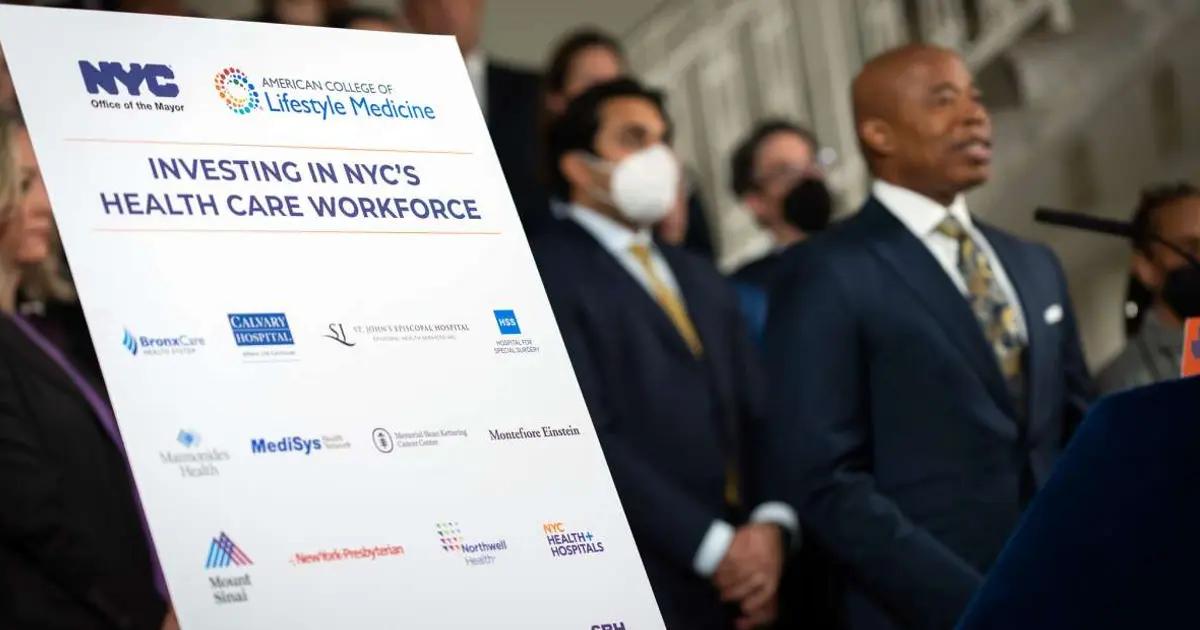 New York City is expanding its plant-based lifestyle health program, trying to train the healthcare workforce at 20 public and private hospitals under this model.

That’s why this Monday, Mayor Eric Adams announced a partnership with the American College of Lifestyle Medicine (ACLM) to offer free introductory training in nutrition to all health professionals in the Big Apple to treat certain health conditions.

“A plant-based diet restored my eyesight. It put my type 2 diabetes into remission. And it helped save my life”, the municipal president reiterated when announcing the investment of $44 million in the program that will be available to 200,000 city workers.

“We are investing in a new healthy model to address chronic diseases and health disparities,” Adams concluded.

Physicians certified in this discipline are trained to apply scientific evidence-based dietary modifications to treat and, in some cases, achieve, without the administration of drugs, remission of certain common chronic conditions.

The pillars of this type of “lifestyle.”

This lifestyle medicine is based on a healthy eating pattern with a predominance of plants, physical activity, restful sleep, stress control, avoiding dangerous substances, and positive social connections.

The initial phase of this training plan will include doctors, nurses, dietitians, and other health professionals.

The training opportunity will include 5.5 hours of self-paced online courses, available for one year.

“As a practicing physician, I know that making lifestyle changes can do much more for my patients with chronic illnesses than many medications. And as a public health leader and epidemiologist, I know that healthy lifestyles are the best way to prevent disease onset. Which, in turn, prevents untold suffering,” said Dr. Ashwin Vasan, Commissioner of the New York City Department of Health and Mental Hygiene (DOHMH).

This initiative comes amid the staggering impacts of chronic disease in the United States and New York City.

For example, 60% of American adults have already been diagnosed with one chronic disease, an estimated 40% have been diagnosed with two or more, and more than 100 million adults, nearly half of the nation’s entire adult population, have prediabetes or diabetes.

Overall, diet quality is the leading cause of premature death in the United States, causing 500,000 deaths yearly.

“In recent years, we have asked a lot of our hospitals. They had to treat COVID-19 patients, implement vaccinations, and screen for mpox. All of these have been acute challenges. We are now going to give back and invest in our healthcare professionals to help combat health disparities in every community,” reasoned Anne Williams-Isom, Deputy Mayor for Health and Human Services.

The weight of diagnoses

About one in four black or Hispanic New Yorkers is obese. This group is three times more likely to die from diabetes or its complications than white New Yorkers.

This announcement has a special repercussion for the Hispanic and Afro-American communities in New York City, disproportionately affected by these pathologies, which according to scientific approaches, are triggered mostly by bad eating habits.

According to data that the American Diabetes Association has been collecting for more than a decade in its New York chapter, 28% of those diagnosed with this disease in the Big Apple are Hispanic, and 31% are African-American.

In a very detailed balance sheet carried out in 2007, it was brought to the attention of the authorities that 23 Hispanics out of every 100,000 people died from complications associated with diabetes.

Since its launch at Bellevue Hospital three years ago, the plant-based medicine program has received national attention. Since the beginning of 2022, the Municipal Administration has expanded to several public hospitals and is trying to spread it to the entire health system.

“Educating our health personnel is a first step to combat these health disparities. We look forward to partnering with the City to continue to reduce barriers and stigmas to achieving health equity,” said Virginia Fields, President, and CEO of the National Commission on Black Leadership on Health.

“27% of medical schools in the United States offer their programs the required 25 hours of nutrition education. The training offered to the New York health person will help raise the level of education in this discipline in all medical areas, providing new hope to patients fighting common chronic diseases,” the City specified in a statement.