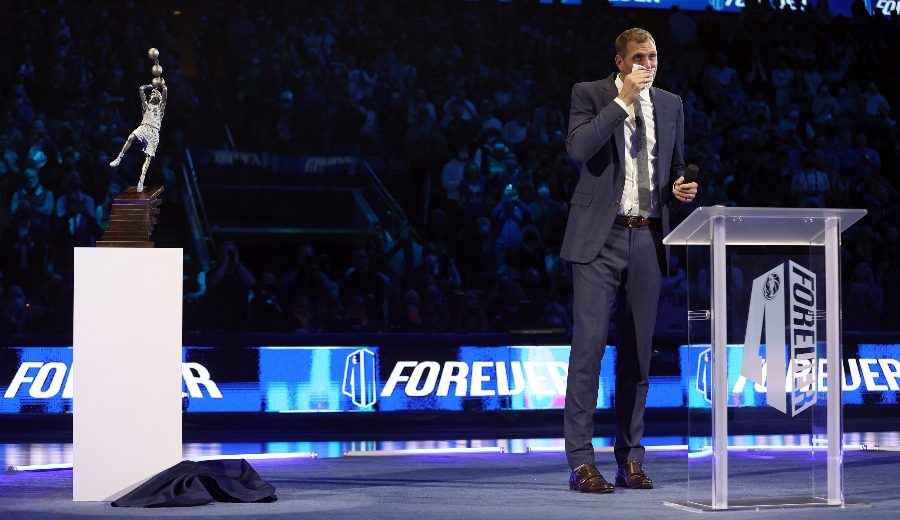 Dirk Nowitzki’s 41 is now eternal. The Dallas Mavericks paid tribute to one of the great legends of the franchise at the end of the meeting between the Mavericks and Warriors, taking the victory at home (99-82) to put the icing on a magical night. With an excited Dirk and accompanied by his family, his jersey already hangs at the top of what was his home for 21 years as a player, a record number among players who never changed franchise.

“I’ve almost gotten over it without getting excited, but I always end up falling with you,” said Nowitzki, who becomes the fourth Dallas player to have his number retired after Brad Davis, Rolando Blackman and Derek Harper. The German led the Mavericks to their first and only championship in 2011, also being the top scorer in franchise history. Along with the German, he highlighted the presence at the ceremony of up to 8 champion members in that historic ring: Tyson Chandler, Shawn Marion, Peja Stojakovic, JJ Barea, Jason Kidd, Caron Butler, Brian Cardinal and Ian Mahinmi.

Jason Kidd put the humorous touch of the tribute. In his speech, the Dallas Mavericks coach asked Nowitzki if he would like to sign a temporary contract to help the team, at this point in which so many 10-day agreements are being signed to supply casualties for the covid protocol.

Also, Mark Cuban, owner of the Mavs, advanced a project that is already underway: a statue of Nowitzki. Cuban discovered a smaller-scale example of what will be a great recognition of Dirk’s figure in the vicinity of the American Airlines Center.

Luka Doncic did not want to miss the ceremony either and even dedicated a few words to Nowitzki: «This is a night that you will never forget. The Warriors are one of the best teams in the world right now and we did an incredible job. And after that it’s been even more special. Being here in the front row to see all this is very special.