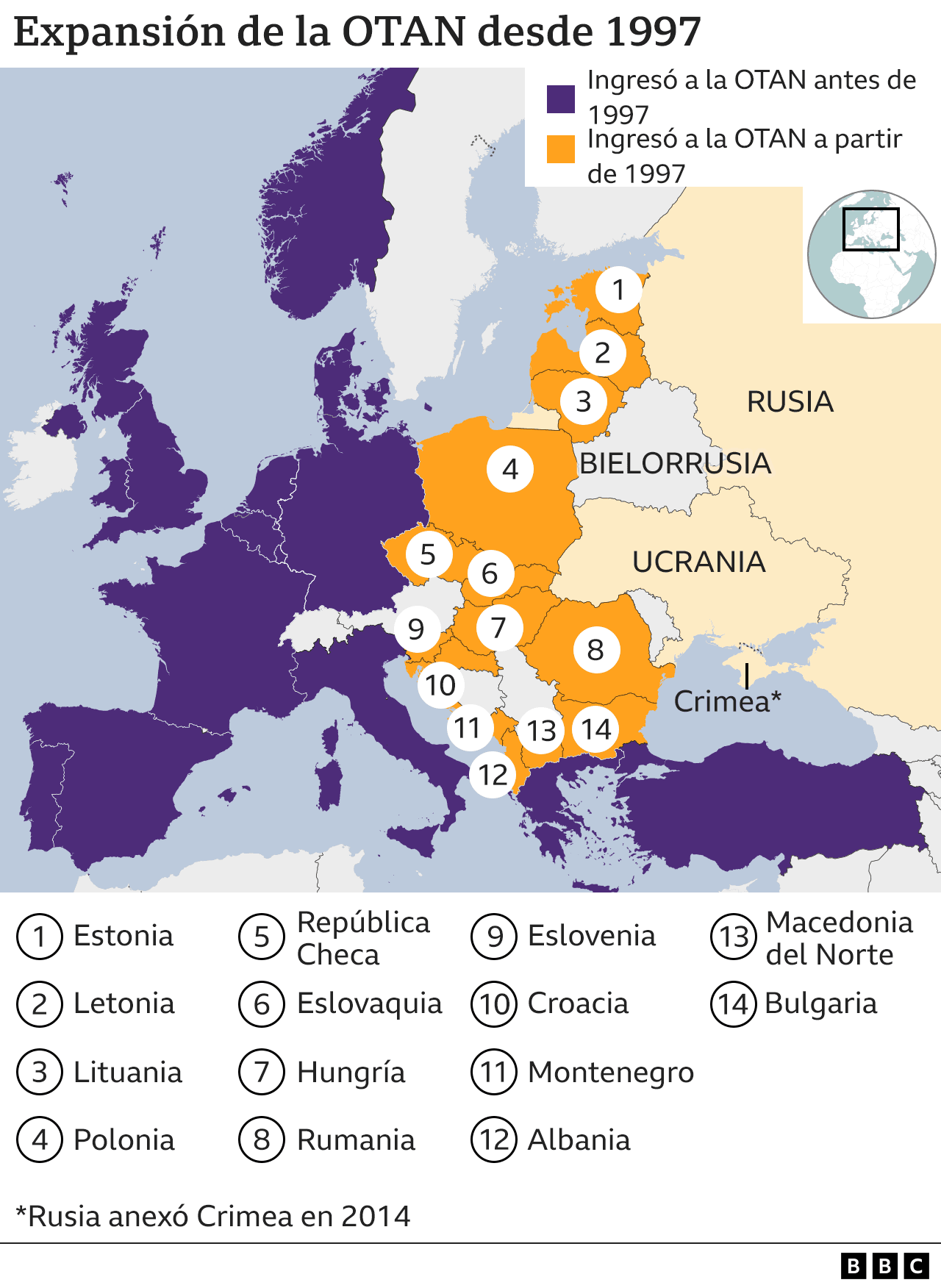 Finland and Sweden, two neutral Nordic states, are so alarmed by Russia’s invasion of Ukraine that they are seriously considering joining NATO this summer.

Russia has warned them not to do so and has threatened them with “a military technical response”.

So we ask ourselves, in general terms, whether Europe would be a safer or more dangerous place should one or both countries join NATO.

It is headquartered in Brussels but is led by the world’s leading military and nuclear power: the United States.

Finland and Sweden are modern, democratic countries that meet the criteria for membership of NATO.

The organisation’s general secretary, Jens Stoltenberg, has stated that he would welcome them with open arms and that their membership would be processed as quickly as possible.

Retired US Army Lieutenant General Ben Hodges, who commanded all US ground forces in Europe, has no doubts about the benefits this would bring to the West.

“The joining of Sweden and Finland to NATO is a big thing, a very positive development. They are two very strong democracies and the armies of both countries are very good, capable and modernized, with outstanding mobilization systems”.

In the case of Finland, a form of military integration is already underway. British tank crews recently carried out exercises with a Finnish armored brigade, as well as US, Latvian and Estonian troops, as part of NATO’s so-called Joint Expeditionary Force (JEF). The UK Ministry of Defense said the goal was to “deter Russian aggression in Scandinavia and the Baltic states.”

So what would be the problem if one or both countries want to join?

What is NATO and how does it help Ukraine?

Russia, and more specifically its president Vladimir Putin, does not see NATO as a defensive alliance, quite the contrary. sees her as a threat for your security.

The Kremlin watched in dismay as NATO steadily expanded eastward, closer to Moscow, following the disintegration of the Soviet Union in 1991.

When Putin was a young intelligence officer in the KGB, the Soviet state security apparatus, Moscow controlled every country in Eastern Europe, with Russian troops stationed in most of them.

Today almost all of those countries have opted to look west and join NATO. Even the Baltic states of Estonia, Latvia and Lithuania, which were once – against their will – part of the Soviet Union, have joined the alliance.

Only 6% of Russia’s extensive borders border NATO countries, but the Kremlin feels surrounded and threatened.

Shortly before sending his troops to Ukraine on February 24, Putin demanded that Europe’s security map be redrawn. NATO troops, he insisted, should be withdrawn from all these Eastern European countries and new members should not be allowed to join.

But in the end his invasion has produced the opposite result.

For decades Finland and Sweden have maintained and reinforced their status of neutrality.

Though culturally on the western side, they have so far been cautious to avoid alienating their giant nuclear-armed neighbor, Russia.

The invasion of Ukraine caused both countries to make a radical rethinking of his position.

Government and citizens alike began to wonder if they might not be safer “under the umbrella” after all, protected by NATO’s collective protection commitment known as “Article 5”.

A recent survey in Finland showed that 62% of its citizens are in favor to join.

From a strictly military perspective, the addition of the substantial armed forces of Finland and/or Sweden would significantly boost NATO’s defensive capabilities in Northern Europe, where Russian forces overwhelm her massively in quantitative terms.

Finland, Ben Hodges points out, would contribute F35 fighter jets, while Sweden has Patriot missile batteries and has reinforced the military presence on its large Baltic island of Gotland, whose airspace was recently breached by Russian fighter jets.

The armed forces of Finland and Sweden are experts in arctic warfare and are trained to fight and survive in the frozen forests of Scandinavia.

Geographically, the addition of Finland would fill a huge gap in NATO defense, doubling the length of its borders with Russia. Security and stability in the Baltic Sea, says Hodges, have improved dramatically today.

Politically, it would shore up the cohesion of the West for mutual defense, sending a signal to Putin that virtually all of Europe is united against his invasion of a sovereign country, Ukraine.

The risk is that such a major expansion of NATO on Russia’s doorstep will alarm and anger the Kremlin so much that it will respond with some sort of violent measure.

The “military technical measures” with which Putin threatened if these nations join NATO were interpreted by experts in two senses: a reinforcement of Russian borders, bringing troops and missiles closer to the West, and possibly an increase in cyberattacks in Scandinavia.

Staying neutral has been very convenient for Sweden over the years. Giving up that neutrality should not be taken lightly.

And there will also be an economic cost to Sweden’s domestic arms industry if the country is forced to buy NATO weapons instead of its own.

Vladimir Putin likes to publicly reminisce about a time in his youth when he cornered a rat in a room and it turned towards him to attack him.

Putin and his advisers already blame NATO, with some justification, for foiling their plans to take over Ukraine.

If they decide, in this case for no reason, that the sudden expansion on their northern flank presents an existential threat to Russia’s security, it is not known exactly how Moscow might respond.