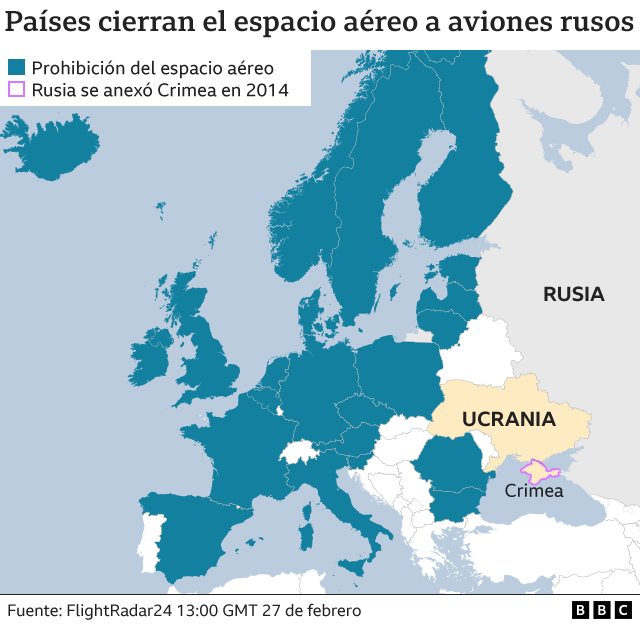 Russian planes are banned from flying over European Union territory from this Sunday.

This means that no Russian aircraft, including the private jets of the tycoons of that countryyou will be able to fly over EU countries, take off from them or land.

Russian planes have also been banned from UK and Canadian airspace.

Prior to the bloc’s decision, several European countries had unilaterally closed their skies to Russia.

Germany, for example, announced that its ban would last three months.

At Moscow’s Domodedovo and Sheremetyevo airports, panels on Sunday showed dozens of flight cancellations to destinations such as Paris, Vienna and Kaliningrad, among others.

Russian airline S7 Airlines posted on Facebook that it would suspend flights to many of its European destinations until no earlier than March 13.

Aeroflot, Russia’s largest airline, reported the cancellation of its routes to Latvia and Romania until at least March 26 and its routes to Prague and Warsaw until March 28.

An eye for an eye, Russia’s response

Russia has responded with reciprocal measures to the countries that have banned their flights.

After the Russian invasion, commercial airlines they also avoid flying over Ukraine, Moldova and Belarus.

In the United States, Delta Air Lines announced the suspension of its agreement with Aeroflot for flight reservations.

Virgin Atlantic estimates that bypassing Russian airspace will lengthen its flights connecting the UK with India and Pakistan by between 15 minutes and an hour.

For its part, the Australian airline Qantas will use a longer route that does not fly over Russia for its direct journey between Darwin and London.

A Russian commercial plane violated Canadian airspace on Sunday, despite Canadian-imposed bans that prevent any Russian plane from entering its territory.

Transport Canada said it would review the conduct of Flight 111 from Aeroflot and that it “would not hesitate to take appropriate enforcement action.”

(1/2) We are aware that Aeroflot flight 111 violated the prohibition put in place earlier today on Russian flights using Canadian airspace.

The plane was en route to Moscow after departing from Miami, Florida, on Sunday, according to flight tracking website Flight Aware.

Canada, along with several Western nations, decided to close its airspace to Russia on Sunday in an unprecedented move aimed at putting pressure on Moscow to stop its invasion of Ukraine.

The United States said it was also considering similar action but has yet to make a final decision, US officials said.