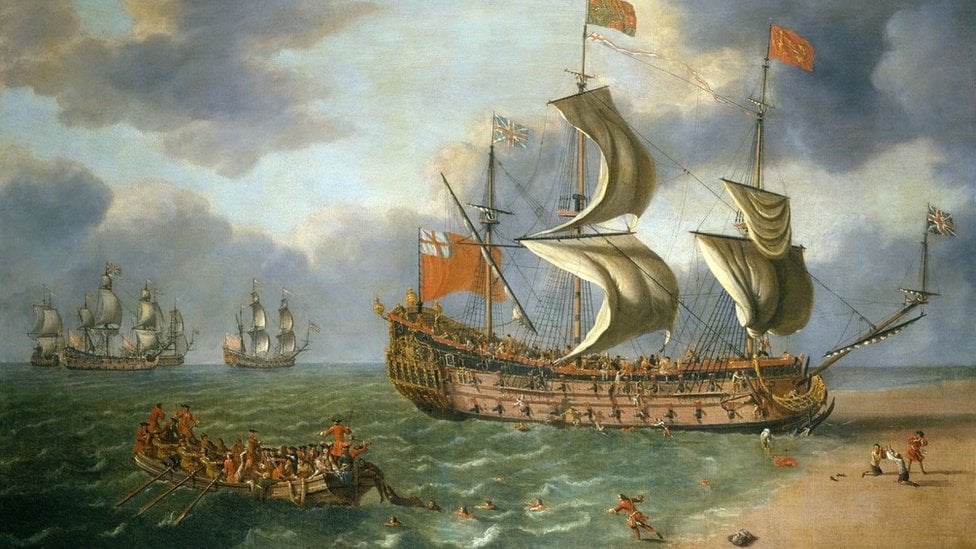 The discovery of a warship that sank 340 years ago while carrying a future king of England has been declared the most important maritime discovery since the Mary Rose (the imposing ship of Henry VIII that was recovered from the bottom of the sea). in 1982).

The Gloucester ran aground off the coast of Great Yarmouth, Norfolk, eastern England, in 1682, nearly claiming the life of the Duke of York, who would later be crowned King James II of England.

The remains of the ship were discovered by divers in 2007, but it was only revealed so far for security reasons.

The whereabouts of the Gloucester remained a mystery until it was discovered 15 years ago, half-buried in the seabed 45 kilometers from the coast, where it capsized while sailing around dangerous sandbars.

It was a disaster that claimed the lives of hundreds of passengers and crew and was about to change the course of history.

Yet the then Duke of York barely jumped off the sinking ship to later become the Catholic heir to the Protestant throne at a time marked by religious and political turmoil.

Professor Jowitt, an authority on maritime cultural history based at the University of East Anglia (UEA), Norwich, said: “Due to the circumstances of the sinking, this can be declared the most important historical maritime discovery since the recovery of the ship. Mary Rose in 1982.”

“The discovery promises to fundamentally change our understanding of the social, maritime, and political history of the 17th century“, he expressed.

“It is an outstanding example of underwater cultural heritage of national and international importance…the full account of Gloucester’s last voyage and subsequent impact must be told again.”

Julian and Lincoln Barnwell, two printing brothers based in Norfolk, made underwater expeditions for four years with the help of his late father and two other friends – one of them James Little – in search of the remains of the Gloucester.

Lincoln said he was inspired by the memory of the recovery of the Mary Rose, but acknowledged that the diving team was beginning to feel like they had failed when they finally spotted a large canyon on the seabed.

“It was amazing and really beautiful,” he said.

“I immediately felt privileged to be there, it was so exciting.”

“At that time we were the only people in the world who knew where the wreck lay – that was special and I will never forget it.”

His brother Julian noted that at first they had no idea of ​​the true historical significance of the Gloucester.

“We had read that the Duke of York was on board, but that was it,” he said.

“We were confident it was the Gloucester, but there are other wrecks out there with cannons, so it had yet to be confirmed.”

“There is still one great amount of knowledge that can be obtained from the wreck, which will be of benefit to Norfolk and the nation.”

Although the team discovered the 340-year-old wreck in 2007, it wasn’t until the ship’s bell was recovered in 2012 that the UK’s Ministry of Defense and shipwreck management body definitively identified it.

Since then, the “at risk” site – within international waters – had to be protected, which is why the discovery has only recently been made public and its location disclosed.

A major exhibition is being planned to take place from February to July 2023 at the Norwich Castle Museum.

A parallel research project also will examine the circumstances of the tragedy and conspiracy theories.

Although the Gloucester was not a slave-trading ship, many people from varied cultural backgrounds lost their lives and historians will make sure their lives are counted, the UEA said.

what was the Gloucester and what survives of the ship?

Launched in 1654 with 54 guns on board and a crew of 280, the Gloucester is the only third-rate warship (classified for exceptional size and speed) to survive from the time when England was a republic under Oliver Cromwell.

He participated in multiple battles and was part of the Royal Navy fleet after 1660, when King Charles II was restored to the throne.

The wreck is split along the keel, with the remains of the hull buried under sand, and it is not known how long it remains intact. There are no plans to bring any part of it to the surface.

One of the wine bottles displays a stamp cast into the glass with the coat of arms of the Legge family, ancestors of George Washington, the first president of the United States.

So far no human remains have been found, only animal bones.

Did the future king prioritize dogs and priests over other?

The Gloucester had sailed from the port of Portsmouth (in the south of England) for Edinburgh and was carrying the Duke of York on a matter of royal concern before the Scottish Parliament.

She ran aground against a sandbank during a strong gale 45 kilometers from Great Yarmouth (east of England), on the morning of May 6, 1682, and sank within an hour.

The Duke of York and John Churchill, the future Duke of Marlborough, were rescued in an accompanying boat.

While an estimated 330 people on board were rescued by fleet ships, it is believed that between 130 and 250 sailors and passengers died.

Witnesses claim that the future king saved Catholic priests and their dogs over his courtiers and crew and, since a royal had to leave the ship first, it delayed his escape and cost countless deaths.

He did not accept responsibility for the tragedy – despite arguing about the ship’s route, like the former Lord High Admiral – and accused the pilot, who was later arrested.

The famous 17th-century diarist Samuel Pepys, who was traveling in the royal fleet, wrote that some of the survivors were pulled from the sea “half dead.”

What would have happened if the Duke of York had died?

The Duke of York was crowned King James II of England (and James VII of Scotland) in 1685, after the death of his brother

If he had drowned in 1682, Charles II’s illegitimate son, James Scott, Duke of Monmouth, might well have inherited the throne.

The reign of King James II – a Catholic in an officially Protestant nation – was marked by political and religious turmoil and the monarch was deposed in the so-called Glorious Revolution of 1688.

Some of those who participated in it had a very low opinion of the Duke of his actions at the Gloucester.

That revolution created a new kind of state, contributed enormously to the modern world and might not have happened if the Duke of York had died in the shipwreck, the UEA said.

Alternatively, he added, a civil war may have broken out between the faction supporting the Duke of Monmouth and those claiming the Duke of York’s legitimate daughter, Mary, and her Dutch husband William of Orange – a couple who replaced the deposed king on the throne. .