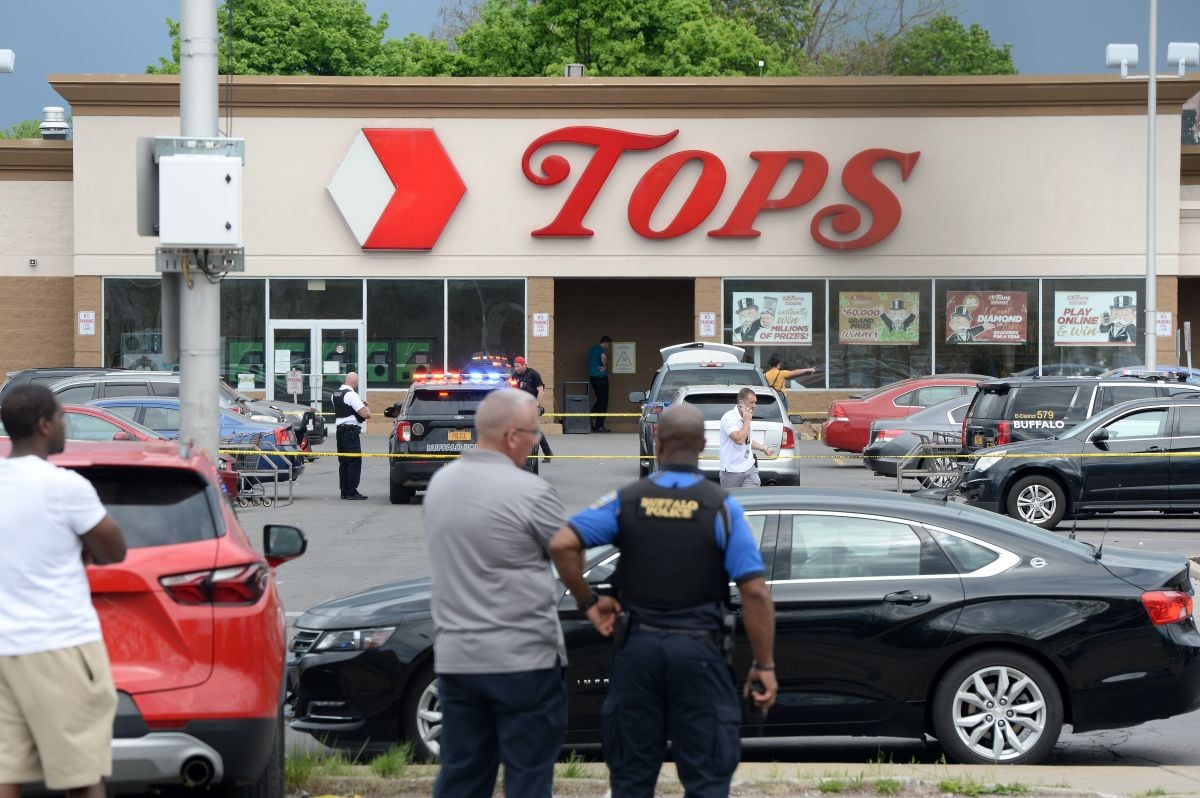 Ten people were killed during a mass shooting Saturday afternoon at a Buffalo grocery store.in upstate New York, in what authorities described as a racially motivated hate crime.

Buffalo Police Commissioner Joseph Gramaglia told reporters that a heavily armed 18-year-old white male entered the store in a predominantly African-American neighborhood and shot 13 people, including a security guard. The gunman later turned himself in to police and remains in custody, according to The Washington Post.

A senior federal law enforcement official identified the suspect as Payton S. Genderon, 18, although the surname appears online under a different spelling, Gendron. The official said that investigators were reviewing a “manifesto” the suspect is believed to have posted online.

The gunman was armed with an assault weapon and was wearing a bulletproof vest, police said, and he had a video camera attached to his helmet that broadcast the shooting live.

In the minutes and hours after the shooting, they circulated on social media horrific videos and images that appeared to have been captured by the gunman. In the footage, he appears to have written a racial slur on the barrel of his gun, according to The New York Times.

Stephen Belongia, the special agent in charge of the FBI field office, said law enforcement officials they were investigating the shooting as a hate crime and a case of racially motivated violent extremism.

Gramaglia said the suspect, who was heavily armed and wearing tactical gear, used a camera to livestream the attack and shot multiple victims in the parking lot before entering the store.

The T Storeops Friendly Markets, where the massacre occurred, is located in a low-income area of ​​Buffalo, it is popular and caters to many people who live in the area. It is centrally located to several area colleges, including Canisius College and Buffalo State College, as well as several area churches.

The grocery store’s longtime security guard, a “hero in our eyes,” Gramaglia said, engaged the shooter but was killed in the encounter. Four of the dead were store employees and six were customers. police authorities said.

Buffalo Mayor Byron Brown said the shooter, who has not been identified by authorities, was not from the city. Brown said this was “a day of great pain for our community.”

Rep. Brian Higgins called the event “a terrible tragedy for the city.” He said the shooting was part of a national problem: “When you have assault rifles in the possession of the wrong people, these kinds of things happen.”

The largest massacre that occurred this year in the United States

The 10 people killed in a Buffalo supermarket on Saturday afternoon represent the highest number of deaths in a mass shooting in the United States so far this yearaccording to the Gun Violence Archive, which tracks mass shootings.

The next highest death toll was six, in a shooting in downtown Sacramento on April 3.