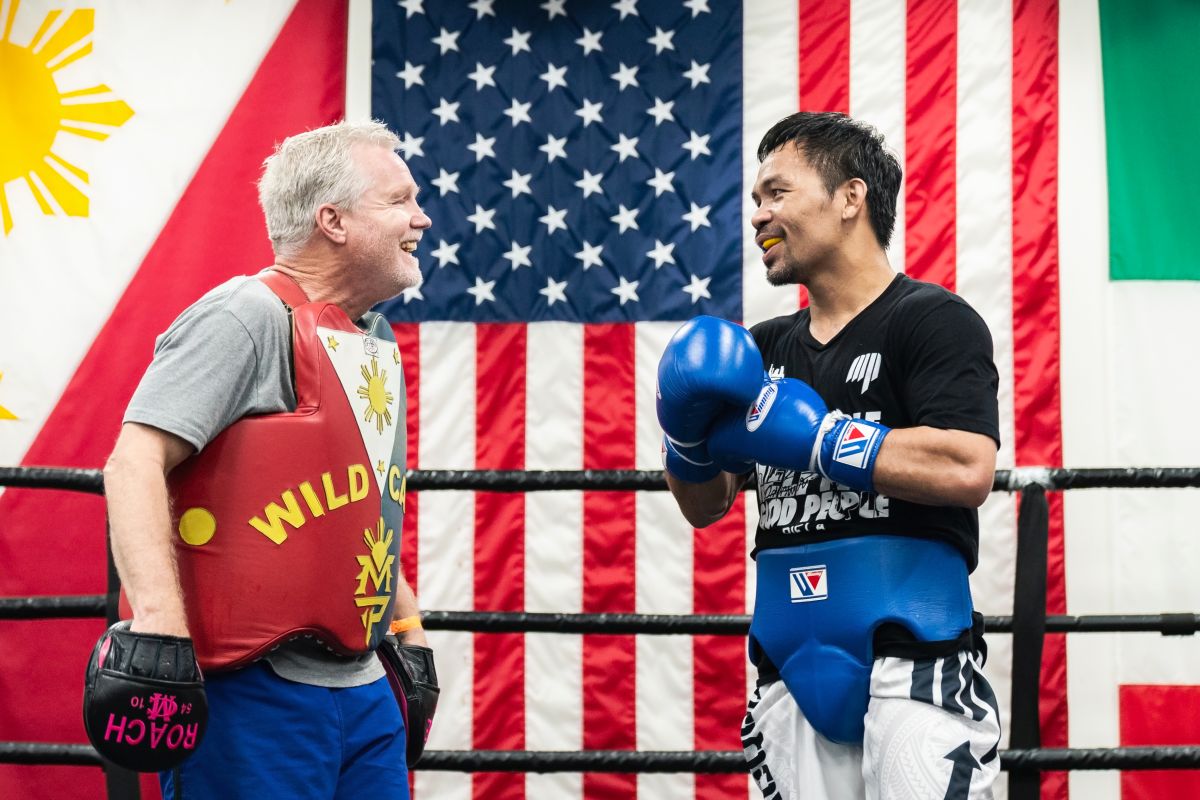 “We will go down in history as the best team ever“. That’s the way the legendary Freddie roach sums up the legacy that he and his fighter Manny pacquiao they will stop in boxing.

Twenty-one years after he started working alongside Pacquiao, with countless achievements and records in the ring, 36 visits from him to the Philippines and also some great scares, the 61-year-old coach is still amazed at the career of “Pacman”.

“I tell people that I was waiting for the next Muhammad Ali to walk through the door and suddenly it was Manny Pacquiao who entered. And he took the world by storm, ”says Roach, who this Saturday will be at Pacquiao’s corner again for his welterweight world championship fight against Cuban Yordenis Ugás, who is seven years younger than the Filipino, already 42 years old. .

This Friday the weigh-in was carried out with both fighters fulfilling the requirement: Pacquiao (67-6-2) gave 146 pounds and Ugas (26-4) 147, so everything is ready for combat in the T-Mobile arena in Las Vegas that will be broadcast on pay-per-view.

Next, La Opinion’s talk with Freddie Roach, one of the most interesting characters in all of boxing.

How much longer will they keep doing this? Aren’t you worried that Manny will keep fighting?

You know, I made an agreement with him a long time ago and I said, ‘When you don’t train hard anymore, I’ll tell you it’s time to finish and we’re both going to retire.’ But is not the case. He works hard every day, he sends me recordings of his training sessions from the Philippines, I tell him what to do here and there.

Is it true that Manny’s sparring partners can get $ 1,000 if he gets knocked down in training and that he didn’t know about it?

This has been the case from day one. I have $ 1,000 in my pocket, in case it happens (laughs). There was one that came close to doing it – he gave Manny a good punch, hurt him and went on top of him to try to finish it, but suddenly Manny reacted and knocked him down (laughs). It has been close to happening, but it has never been the case. He has good genes. He is simply a very long-lived man. He is 42 years old and a little old, but his work ethic is incredible.

Is there anything that you two as a team have regretted?

I don’t think we have any regrets… he hasn’t run me off. I have been fired by others many times. Manny and I understand each other very well. Usually when something bad happens, the coach is the one who is blamed and leaves. Manny Pacquiao has been on my side the entire time. He has always been very good to me… He spends money on poor people in his country. Sometimes I wonder if he has anything left over, but he builds houses, does good things for his people and is good to me, he pays me well. I tell people that I was waiting for the next Muhammad Ali to walk through the door and suddenly it was Manny Pacquiao who walked in. And took the world by storm.

What is Manny’s best kept secret?

I don’t think I have any secrets. He wants to be president of his country, I hope he can. He grew up very poor: he left home and his father ate his dog. In his first professional fight, he made $ 4. He had to be in poverty and he does not want his people to go through the same thing. He helps a lot of people, he’s very generous, he’s good, and he still knows what he does best: boxing. And we are not done. I promise you.

What is your favorite fight of Manny’s career?

When he beat Marco Antonio Barrera in Texas (2003). He knocked him out in 11 rounds. I tried to bet on him, but the odds were very high (laughs). It’s my favorite fight. It’s funny because the other day we were training and he was doing really well, he looked like that time in Texas. I said, ‘Keep that in mind. And it is doing it.

Can you describe the shock you got when Manny was knocked out by Juan Manuel Márquez in his fourth battle (2012)?

When Manny was on the ground I got a little nervous, he was there a long time and I was very worried. I thought, ‘Is he going to get up?’ When he did I started talking to him and asking him questions and he answered me correctly. The ambulance is waiting and he said, ‘I have to go to the bathroom first.’ I asked him why and he said he had blood all over his face, and I asked him how he knew if there were no mirrors. He said, ‘I can feel it. He knew exactly what was going on, everything; he washed his face and shortly after we got into another fight.

How long do you want to continue as a boxing coach?

I have a good gym, Manny sometimes asks me to retire with him. I tell him that maybe I will when he retires, that can happen. But I have a lot of young men growing up in boxing, although I’m not looking for the next Manny Pacquiao because that’s impossible, that’s just once in a lifetime. I have a lot of fun in the gym, I train like 12 hours a day.

I think we will go down in history as the best team of all time. No one has lasted 21 years together. We are very close, he lives far away in the Philippines, I have been there 36 times, I know the place very well, it is very poor, there are many sad things. Manny says they don’t have enough vaccines for the virus, so he asked the president of the United States if he had two million doses to send to the Philippines and he said yes. That was a great moment. I said, ‘Manny, that’s great, how did you get the president’s number.’ But I still don’t know how he did it.

I know you have been critical of Canelo Álvarez at times, but what do you think of the work he is doing as the top boxing star today?

He’s great at boxing, he’s a great fighter. Guys like him and Manny work hard. Every time Manny confronts a Mexican they want to call him the “Mexican killer” or something like that, but he doesn’t want to know anything about it; He respects Mexico and Mexican fighters a lot. They have been an important part of his career.

Who has been Freddie Roach’s favorite Mexican fighter?

My favorite Mexican fighter of all time is Rubén Olivares. I loved the way he ended them, he could have been the best knockout in the world because if he hurt you, the fight would end there. I remember watching it on Channel 27 in Boston, Massachusetts.