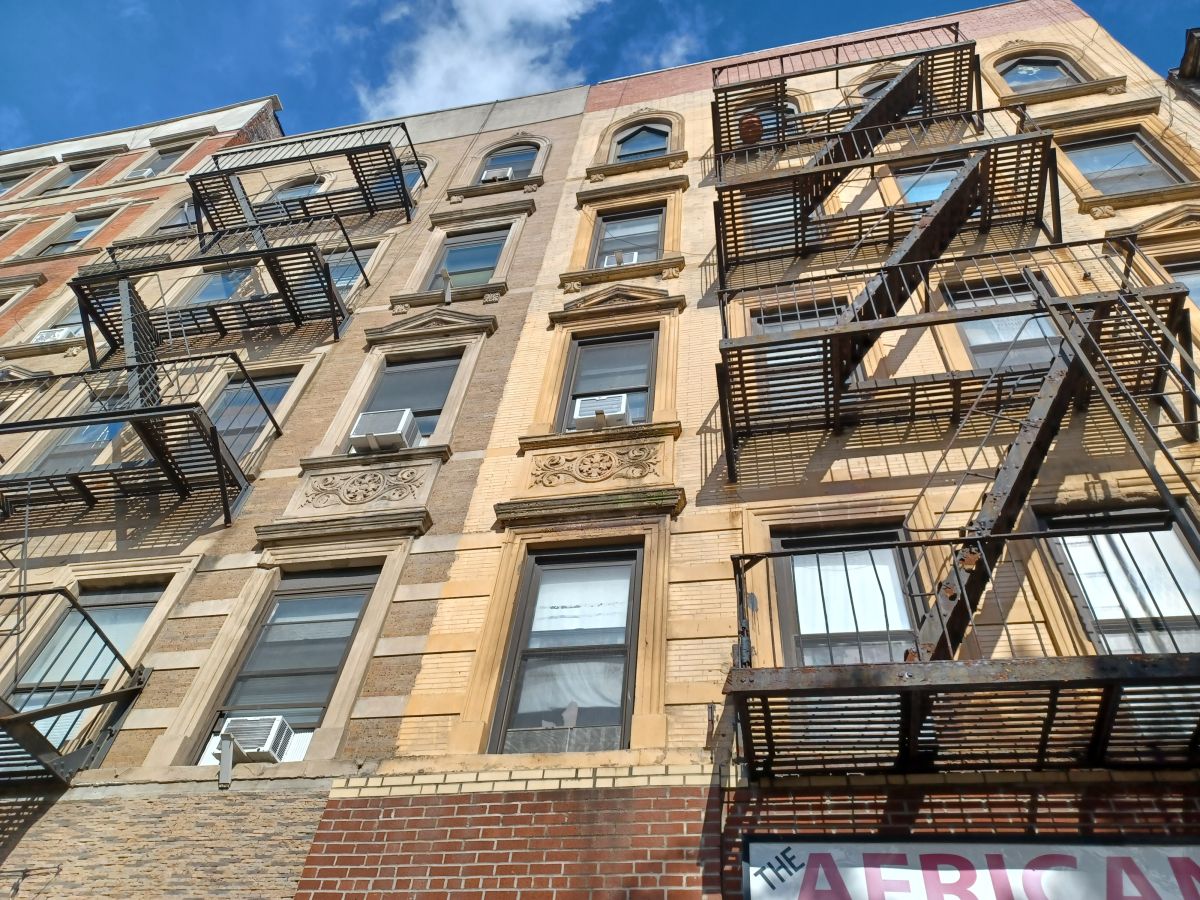 Although the avalanche of real estate evictions that many estimated never came, after the state of New York repealed the rent moratorium measures due to the pandemic on January 15, all reports confirm that the judicial processes that have forced families to leave rented houses or apartments, already reached last July the “regular” levels that were recorded before the public health crisis.

At this point, in a terrible affordable housing crisis, there is one very clear fact: Until last week, on the map of the Big Apple, the zip codes that concentrate the largest Hispanic population, coincide with the highest number of lawsuits in court between landlords and tenants.

The numbers of the Eviction Lab organization that monitors judicial requests for evictions in the 299 city zip codesdetails how in Upper Manhattan neighborhoods such as Washington Heights and Harlem, these types of trials are being higher than in any other locality.

This list is headed by zip code 10031, where part of the Little Dominican Republic is located. 143 legal proceedingswhile in three zip codes that make up Harlem, they concentrate 264 cases.

In this sense, eleazar goodpresident of the Community Board 12 which includes parts of Washington Heights and Inwood, highlights that he continues to be amazed at the number of families in their 30s and 40s in these neighborhoods who continue to move due to unaffordable rental costs. And, even more so, given the effects that the pandemic leaves on the real estate market and the galloping inflation this year.

It is a sequence of displacements that did not start with the pandemic, but it does look like a additional fuelafter two years of economic challenges for the working class.

In fact, according to data from the 2020 Census, more than 17,000 Hispanics left Washington Heights and Inwood between 2010 and 2020, but on the other hand, the two neighborhoods received 4,824 white people in this same period.

“We have worked as a board on very clear resolutions, such as when we opposed the recent adjustment of the stabilized rent. But there is a very powerful reality in the market, that continues to expel our families to other states and to the Bronx”, Good analyzes.

The community leader assures that at this moment it would be very “populist” and “irresponsible” to propose medium-term relief to working-class families, since the pandemic emergency aid funds are running out and income continues to experience a historic rise.

“I see that many people decided to stop fighting the tide, because they know they are going to drown, so they choose to leave Upper Manhattan,” he concluded.

Based on the indicators, everything allows us to predict that in the coming months the hispanic and african american families They will be the ones that will receive the most eviction “tickets”, as a result of judicial processes that are underway, at low speed, but steadily.

The median rental income in this entire county, exceeded $5,000 a monthfor the first time in history last June, according to 6sqft, a specialized real estate publication.

A company report Douglas Elliman and Miller Samuel, found that the median rent in Manhattan was $5,058 per month in June, an increase of 1.7% from the May average of $4,975. And an astronomical increase of 29% if it is contrasted with the average of $3,922 in June 2021.

In this sense, the Dominican Graciela Santos, who lived for 24 years, on 190th Street in Upper Manhattan, says that she is part of the families that had to leave their neighborhoods, after fights in court, who ended up losing.

“Regardless of the details of each case, the ‘landlords’ here in Upper Manhattan are clear about what they want. And it aims to get the poor out of here. When they intend to evict a family, they will always look for the best way to achieve it. They change owners, knock down the building, make some repairs.And there is nothing to do”, he added.

The other neighborhood where the Eviction Lab mapping highlights a higher concentration of housing dispute cases is Corona, Queens, where the 74.16% of its residents are Hispanic.

In the last 30 days have accumulated 110 cases in zip code 11368the largest number after Washington Heights.

For its part, Elsia Vasquez founder of the organization People against abuse of landlords and abuse of tenants (PALANTE), based in Harlem, points out that the evictions, although they are not being registered in the massive terms that many assumed, it is not difficult to predict that they are of a “time bomb” that could explode in months.

“Many vulnerable renters have turned to federal aid and City resources. and that goes on freezing and delaying court proceedings. But there is another aspect that we have seen: many people have left voluntarily under the pressure of all costs. That’s why you don’t feel that avalanche that many presumed, “argued the activist.

The leader of PALANTE describes a whole panorama that includes many beneficiaries of stabilized income who died, others who decided not to fight their cases, because they did not have adequate information. And another group that decided to leave the city for multiple reasons.

“For all these reasons, small storms are hardly observed, but that cyclone can arrive in a moment. That is why we insistently repeat to New Yorkers, to seek the resources available, that they are not only left with the scare when a landlord tells them that they have to leaveVasquez stressed.

According to data released by the Legal Aid Society, evictions carried out across the city have risen every month since the moratorium expired.

So far in all of 2022, a little more than 54,200 eviction applications in the city, but everything indicates that there is the perfect scenario for that number to increase in the months to come.

By comparison, there were almost 180,000 eviction applications in all of 2019the year before the public health crisis caused by COVID-19.

But all these numbers only describe the processes in which the tenants had to move pressured by a judicial intervention. Not including who they left their residences “without a fight”.

“We will see more people on the street“

Several organizations defending tenants, such as Legal Aid, have also interpreted that it is a matter of time before the eviction machinery accelerates. Unless legislation such as “Evictions for Good Cause” is passed, which did not pass the test in the State Assembly last session. A formula designed for curb indiscriminate rent increases.

For dozens of organizations defending the rights of tenants, this draft under the code (S2892) is the only way close to avoid disproportionate increases in rent and judicial processes of unemployment, without a compelling reason.

The rule contemplates several layers of protection in a general way, such as prohibiting evictions of tenants who cannot pay a rent that has increased more than 3% of annual rentor 150% of the Consumer Price Index for each region.

Also, the Bronx resident, Loretta Garcia, organizer of Communities for Change NY, highlights that in New York right now there is nothing that comes close to a clear and concrete rule that puts a wall to displacement and unemployment in the future. In his opinion there are only “beautiful speeches by elected leaders.”

“The Current City and State aid programs for rent relief, they only put a pause on evictions, but in a matter of months, they will still end up evicting thousands of people from their homes, because even if they are not delinquent, they will not have to pay the increases. The other issue is that the housing courts are overwhelmed and slow due to the pandemic, but when that normalizes, we will see more people on the street”Garcia estimated.

“Only evictions are delayed”

On the side of the landlords, the president of the Income Stabilization Association, Joseph Strasburg estimated before local media that there are other reasons why the evictions have not had the expected pace, after the moratorium executive orders that were renewed for almost two years will end: the operation of housing courts.

“The courts that deal with these issues had been operating with only about 50 judges before the pandemic. They are not normalized yet. This aspect reduces the number of cases that are heard. And maintains a buildup that has denied both landlords and tenants that their cases move forward”, he highlighted.

A attorney for a real estate owner in Upper Manhattan, who preferred to keep his name anonymous, stressed that his client is owed back rent more than $278,000.

“Renters are clinging to protections that still exist, just to delay eviction, but the support programs are not flowing properly, nor will they solve the housing crisis. They have been a failure. Why not they do not give a substantive answer neither to the families, nor to the owners”he concluded.

Are you being evicted?