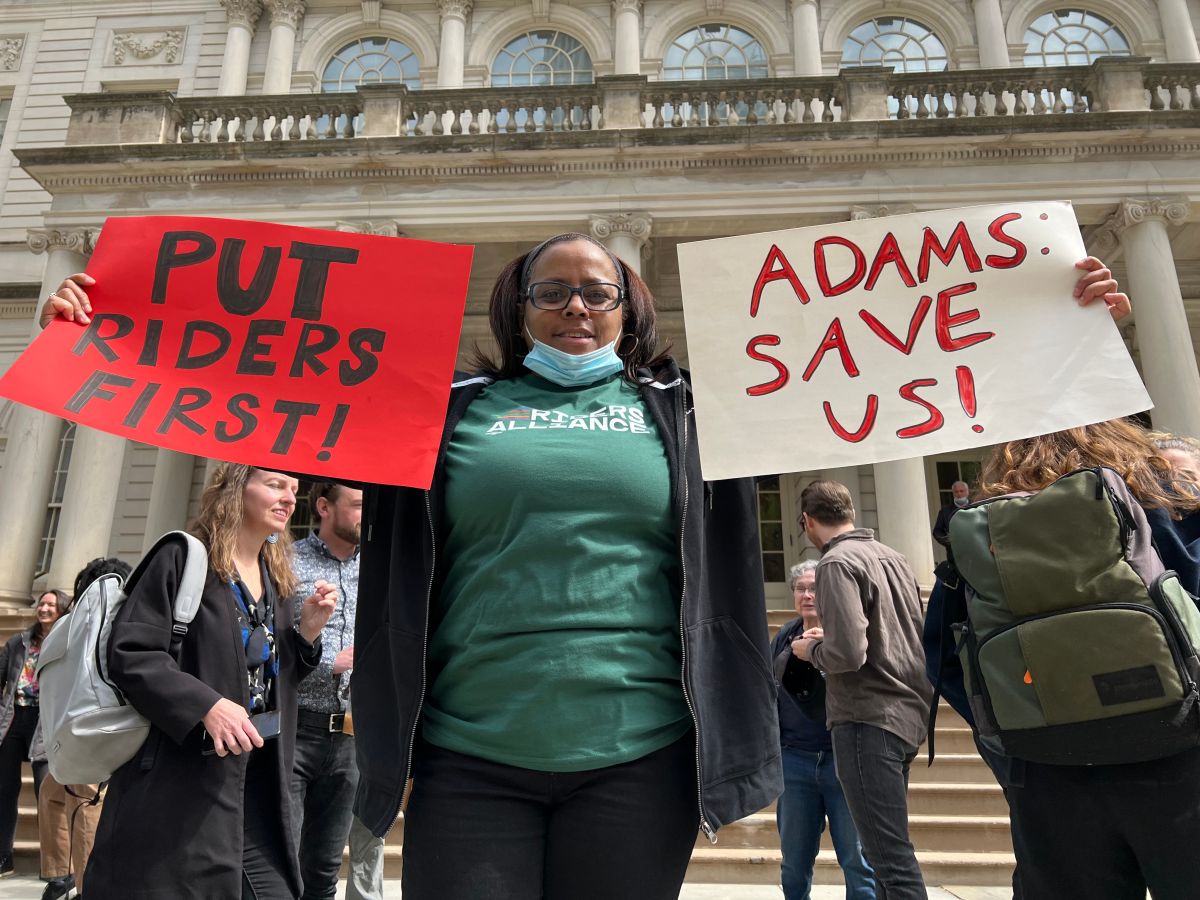 This April 22 is Earth Dayand as a prelude to the commemoration of the date, drivers, bus passengers, cyclists, pedestrians, transport organizations and environmental defenders gathered outside the headquarters of the New York City Hall to demand the Mayor Eric Adams to get on the bus of the reform plan to the streets of the Big Apple.

The call they made to the local president is that he join the “Street Plan”, promoted by the city ​​Counciland support the $3.1 billion allocation in next fiscal year’s budget to build more bike and bus lanes as well as pedestrian-free zones and reduce carbon emissions.

Activists and supporters of the plan to “reimagine” streets and bus transportation in the five boroughs of New York, implored the Mayor to say “yes” to the project, With which they assured, many lives would be saved and the safety of passengers, cyclists and pedestrians would be placed above cars, and in the process it would make bus lines reach neighborhoods far from public transport.

At the same time, they ensured that by redesigning transportation in the city, promoting the use of more bicycles and building exclusive bus lines, kill two birds with one stoneas transport conditions are improved and the environment is protected.

“The New York City Streets Plan is key to achieving transportation equity and combating the climate crisis,” he said. Danny Harris, executive director of the organization Transportation Alternatives, while asking Albany to turn over control of the speed cameras to the City.

“The Streets Plan is New York City’s way of ensuring faster commutes, fewer traffic deserts and less carbon pollution in communities across all five boroughs,” Harris added, warning that what the plan does is give New Yorkers more choice and opportunity in matters of health, safety, and equity.

Jolyse Raceof the Riders Alliance organizationwhich advocates for the rights of those who use public transportation in the city, asked Mayor Adams to show the same interest as the City Council and support the inclusion of the $3.1 billion to transform New York’s streets and the environment.

“We bus riders urge Mayor Adams to embrace the City Council’s bold vision for better buses and safer streets. Expanded funding for faster, more reliable bus service and better access to neighborhoods that don’t have a subway will make New York work better for everyone who lives, works and visits here,” said the commuter.

The president of the Transportation Committee of the Municipal Council, Selvena Brooks Powersjoined the call and asked the mayor to side with the defenders of a city with safer streets.

“We need to invest in safer infrastructure for our communities and make public transportation more affordable for all New Yorkers. That is why we have to act right now, in order to have a greener and more equitable city”, said the political leader.

Elke Weissmember of the organization Families for Safe Streetswho lost his grandfather in February after being hit by a vehicle, asked the mayor not to ignore the clamor of families of victims of irresponsible drivers and demanded that he keep his word to honor the memory of his loved one, guaranteeing more safety in the streets of New York.

“My grandfather survived the holocaust and he did not survive the streets of New Yorkand we do not want other families to go through this pain, so we ask that this street plan be approved, which we know will save lives,” said the pained woman.

The Peruvian Norma Ginasa resident of the county of the Bronx, recounted how every day, due to the lack of transportation close to her home and the slowness of the buses, after picking up her two children from school, it takes them a long time to get home, so who asked for faster lines with dedicated lanes.

“Not only is there a lot of traffic and construction and blockages of the bus line, because we do not have a designated line for us, but sometimes there are no options to reach the destination,” said the mother of the family, who added that if lines are built like the one on 14th Street, which has made travel faster and safer, she would have more time to share with her children. “If the Mayor approves that money, it would help people like me a lot. and in the process it can make the City money by fining those who block traffic. I want the buses to move faster.”

The Ombudsman, Jumaane Williams It showed that if the requested money is not invested to reform the streets, there will be more lives lost.

“The Last year was one of the deadliest years registered for safety on the streets, a tragic demonstration of our city’s failure to meet the goals of the Vision Zero plan,” said the public official, noting that the 2019 legislation passed to develop a transportation master plan remains weak if not investments are made. “I urge the Administration to fund New York’s streets plan in this year’s budget and advance the work to make streets safer in every neighborhood, in every borough.”

Regarding the request of the protesters, the office of Mayor Eric Adams did not specifically respond if it will support the disbursement of the $3.1 billion for the safe streets plan, but revealed that the president is committed to making changes that result in greater safety for all.

“Mayor Adams has unveiled an ambitious and historic plan to address the traffic violence crisis, make our intersections safer and speed up our buses. We welcome the opportunity to partner with any New Yorker committed to those goals to make our city safer, greener and more prosperous,” said a spokesperson for Mayor Adams.

Likewise, the Municipal Administration official stressed that the president has committed to building 150 miles of new lanes and routes for buses, in addition to the 140 existing miles and redesign 1,000 intersections where 79% of pedestrian injuries occur.

Data from the plan to redesign streets and safety in NYC