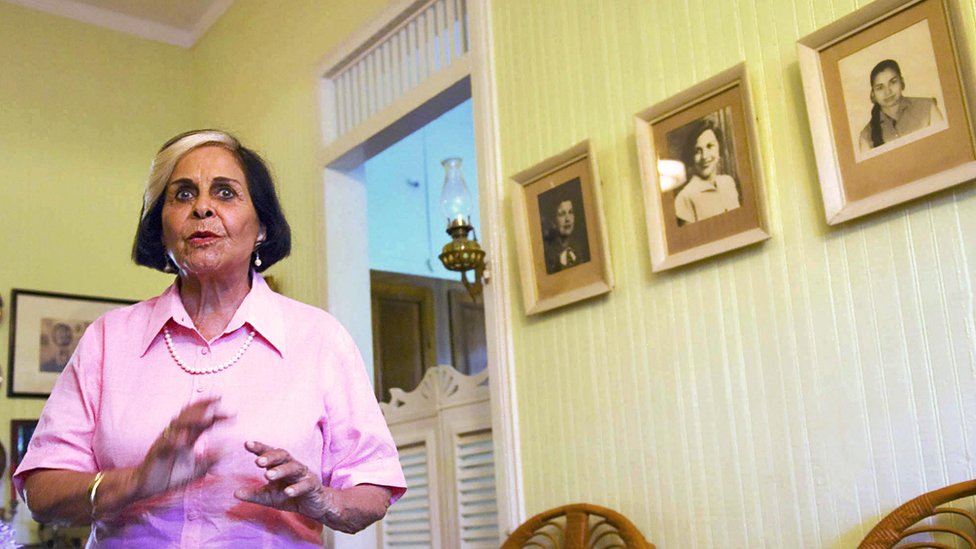 “If they kill me, I will take my arms out of the grave and I will be stronger.”

With this phrase, the Dominican activist Minerva Mirabal responded in the early 1960s to those who warned her of what seemed like an open secret at the time: the regime of President Rafael Leónidas Trujillo (1930-1961) was going to kill her.

On November 25, 1960, his body was found shattered at the bottom of a ravine, inside a jeep along with two of his sisters, Patria and María Teresa, and the driver of the vehicle, Rufino de la Cruz.

More than half a century later, Minerva’s promise seems to have been fulfilled: her death and that of her sisters at the hands of the Dominican secret police is considered by many to be one of the main factors that led to the end of the Trujillo regime.

And the name of the Mirabal has become the World symbol of women’s struggle.

This Thursday, like every November 25, the strength of Minerva, Patria and María Teresa will be felt especially on the occasion of the International Day to Eliminate Violence against Women, which was declared by the UN in honor of the Dominican sisters.

Known as “Las Mariposas”, these women born into a wealthy family in the Dominican province of Salcedo (now Mirabal Sisters), with university degrees, married and with children, had at the time of their death about a decade of political activism.

Also read:  Connecticut woman scammed her husband into thinking he had Alzheimer's

Two of them, Minerva and María Teresa, had already been in jail on several occasions. A fourth sister, Belgium Adela “Dedé” Mirabal, who died this year, had a less active role in the dissent and managed to save herself.

“They had a long history of conspiracy and resistance, and many people knew about them,” Luisa de Peña Díaz, director of the Memorial Museum of the Dominican Resistance (MMRD), explains to BBC Mundo.

That fateful November 25, secret police officers intercepted the car in which the sisters were traveling on a highway in the province of Salcedo, in the north-central part of the country.

The women were hanged and then beaten so that, when thrown into the vehicle over a cliff, it could be interpreted that they had died in a car accident.

At the time of death they were between 26 and 36 years old, and had five children in all.

“It was a terrible day, because although we knew it, we did not think that the crime was going to be updated,” says Angela Belgium “Dedé” Mirabal in the documentary “Las Mariposas: Las Hermanas Mirabal.”

“There were some policemen and I would grab them and tell them: convince yourself that it was not an accident, that they were murdered,” Dedé said.

The popularity of the three women, together with the increase in crimes, torture and disappearances of those who dared to oppose the Trujillo regime, made this murder mark Dominican history.

“The crime was so horrific that people began to feel totally and completely insecure, even those close to the regime; because kidnapping three women, killing them with sticks and throwing them down a ravine to make it look like an accident is horrible, ”explains De Peña Díaz.

In the words of Julia Álvarez, an American writer of Dominican origin, the key to explaining why the history of the Mirabal is so emblematic is that they put a human face on the tragedy generated by a violent regime that did not accept dissent and that it had been murders for three decades in the country.

“This story tired the Dominicans, who said: when our sisters, our daughters, our wives, our girlfriends are not sure, what good is all this?”, Says Álvarez, author of the novel ‘El tiempo de las mariposas’ , based on the story of the Mirabal sisters that inspired a movie of the same name.

In this sense, the director of the MMRD points out that all those involved in the “execution”, as it is known in the Dominican Republic when Trujillo was shot dead on a highway on May 30, 1961 when he was going with his driver to visit a young lover, “without exception they cite the crime of the Mirabal as the last straw”.

The power of butterflies

“The Mirabals pulled their arms out of the grave in a strong way,” says Peña Díaz.

And although the tributes to these sisters were slow to arrive out of fear, today Minerva, Patria and María Teresa are a symbol of the Dominican Republic.

In the Caribbean country, in addition to a province with their name, they have dedicated, for example, a monument in a central street in Santo Domingo and a museum in his honor that every November 25 becomes a pilgrimage site for many people.

In addition, since 1981 the date of her death became a designated day in Latin America to mark the struggle of women against violence, with the first Feminist Encounter of Latin America and the Caribbean taking place in Bogotá (Colombia).

In this meeting, the women denounced the gender abuses they suffer at the domestic level, as well as rape and sexual harassment by the States, including torture and imprisonment for political reasons.

* This note was originally published on November 25, 2014