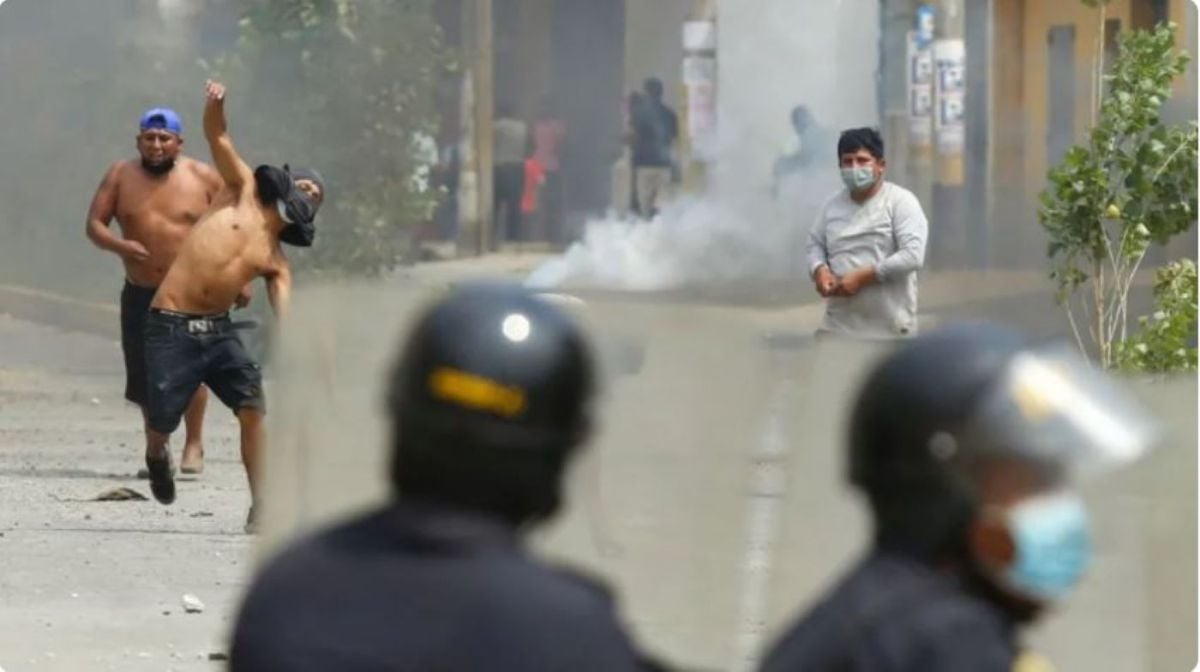 There are more and more voices from analysts who warn about the potential political consequences of the inflationary wave that is sweeping the world.

Especially in Latin America, the region where the cost of living has risen most rapidly and governments face serious difficulties in curbing inflation, after the pandemic left public coffers in a complicated situation.

Recently in Peru, protests broke out against the government of Pedro Castillo, which began with a strike by transporters due to the high fuel prices.

With the war in Ukraine, in addition to the escalation in oil prices, the cost of food has also skyrocketed.

The wave of inflation has brought to the table the debate on the political effects that rising prices may have in the region.

Although the common denominator is inflation, it is also true that each country has its own internal conflicts and that not all are exposed in the same way to an economic crisis causing a social explosion like those that occurred at the end of 2019, just before that the covid-19 pandemic arrived.

We talked about this with Daniel Kerner, director for Latin America of the Eurasia Group, an international political and economic analysis consultancy.

In Peru, we have seen street protests that began with a strike by transporters due to the increase in fuel prices, but which later spread to other sectors. Although the mobilizations have their own internal political causes, the increase in inflation has been one of the triggers. What do you think of what is happening in Peru?

The social unrest in Peru has been going on for a long time, it was already there before the pandemic, particularly with the political class and the entire crisis that existed at that time.

The pandemic hit Peru very hard, it is one of the countries with the most deaths, with a very strong economic impact and that led to Castillo’s victory but without him being able to do much to contain that discontent now.

And I also believe that Peru has a peculiarity, unlike other Latin American countries, that in general the presidents in Peru have very low approval levels, even when the economy is growing very well.

I believe that this is influenced by two issues: a highly fragmented party system and a State with little capacity to respond to people’s problems.

Even when the country was growing economically at very high rates, there was a lot of discontent. So it’s no surprise that, with a weak president and years of an unresponsive political system, when inflation rises these protests are generated.

Could this crisis put the Castillo government in check considering the country’s history of political instability?

Yes, this is beginning to cast doubt on the government’s ability to survive because it is a conflict that is difficult to resolve.

Let’s talk about Latin America. Inflation was skyrocketing in the region last year and now with the war in Ukraine the cost of living has skyrocketed. It’s like it’s raining on wet. What consequences can this phenomenon have?

There are two important issues currently in Latin America from the political and economic point of view.

One is social discontent, which was already strong before the pandemic, but was further aggravated by it.

And then countries begin to recover, but with little growth and very high inflation. The central banks of Latin America are among those that have raised interest rates the most in the world.

With the war there is another inflationary blow and this is beginning to be felt very strongly.

The problem is that you are seeing governments with few resources to face inflation.

Could we see protests in other countries in the region triggered, in part, by inflation as is happening in Peru?

With this inflation there is a high risk that the protests in Peru could be repeated in other Latin American countries.

What we see today is that the discussion about what to do with fuel prices is everywhere.

It is in Argentina, in Brazil, in Mexico, in Peru and as long as the conflict in Ukraine continues, which seems to continue, the inflationary pressure will continue.

And in that context I don’t see that governments have a lot of money to help. I do not see it.

With so little room for maneuver on the part of governments, do you think that the increase in the price of fuel and food could trigger protests in some Latin American countries as we saw at the end of 2019 with the wave of social unrest?

Yes, in 2019 we already saw discontent in many places, it is true that at first the pandemic put a lid on the problem. But it is that at the same time he puts the lid on it and adds more fuel to the fire.

The regional economy fell, many people died, inequality became more evident, how bad public services are. And the exit has been marked by low growth with high inflation.

I think now we have that discontent aggravated by the pandemic and by inflation.

And as much as central banks raise interest rates to control inflation, it comes from outside, so they’re not very effective either. In general, most of the governments in the region are in a context of reducing public spending.

You would say that there is little room for maneuver then, for example, to deliver more fuel subsidies…

The resources are not available to raise the subsidies. And people don’t care if it’s because of Ukraine or Russia. What people feel is that fuel is expensive.

And in families with lower incomes, higher inflation can make the difference between eating and not eating. What political effect can runaway inflation generate in the region?

Even if inflation is not out of control and continues at the high levels we have now, there are effects.

I think the most important political effect of high inflation is that it increases social discontent.

And not only of the poor, but also of the middle classes. It may be that some governments launch some social programs to help the poorest but the middle classes are not going to receive any help. So I think this makes everyone angry.

This makes the candidates who present themselves as representatives of change, or the so-called “outsiders”, more competitive in the elections.

So you can have protests like the ones in Peru. On the other hand, governments are not going to want to make fiscal adjustments, they are going to weaken. All this generates uncertainty in the business climate, affects investment and also economic recovery.

Precisely on this, this year there are presidential elections in Colombia and Brazil. How can the increase in the cost of living affect the results?

In Colombia it will give Petro more competitiveness, who is the candidate who seems to me to best capture this social discontent.

In Brazil it would give the impression that it will give Lula more competitiveness because the anger that there was four years ago over corruption, which somehow gave Bolsonaro a boost, seems to be a little less important than the economic part.

That is where Lula seems to be better aligned because people remember the good years of Lula. In that sense, I believe that he favors the two leftist candidates, at least in the elections.

But on the other hand, if they win, there will be high expectations that they are going to solve the economic problem and they don’t have many tools to do it. It may happen that after a while the discontent with these governments also increases.

We just had elections in Costa Rica and one of the discussions in that country is that the country, hit hard by the pandemic, has a large debt and a public deficit that endangers fiscal sustainability and the possibility of fulfilling electoral promises.

In Colombia and Brazil as well.

How are the campaign promises going to be financed if the fiscal wallet is not enough?

It is possible that in this context we will see pressures to increase taxes on companies and the richest. And perhaps we will see proposals for price controls, as is happening in Argentina.

López Obrador, for example, said that he could consider it, so when the Latin American governments do not have other tools to face inflation, they will end up going there.

Nayib Bukele, the president of El Salvador, has also mentioned the issue of fuel subsidies

Well, El Salvador has a debt problem too. It has a problem reaching an agreement with the IMF, in short, I believe that the fuel subsidy is the response of many governments at the expense of fiscal stability.

More debt and more taxes. It is that inflation has a very direct impact on the people, on the electorate, and governments cannot do much to contain it and to provide solutions.

Could Peru be the first case of a possible second wave of the social explosion?

The risk of these protests arising is throughout the region and also in other countries outside Latin America, where rising food and fuel prices also tend to generate these protests, such as in the Middle East or in some parts of the world. Asia.

The pressures from carriers, for example, are going to be very high throughout the region.

Or all three things together.