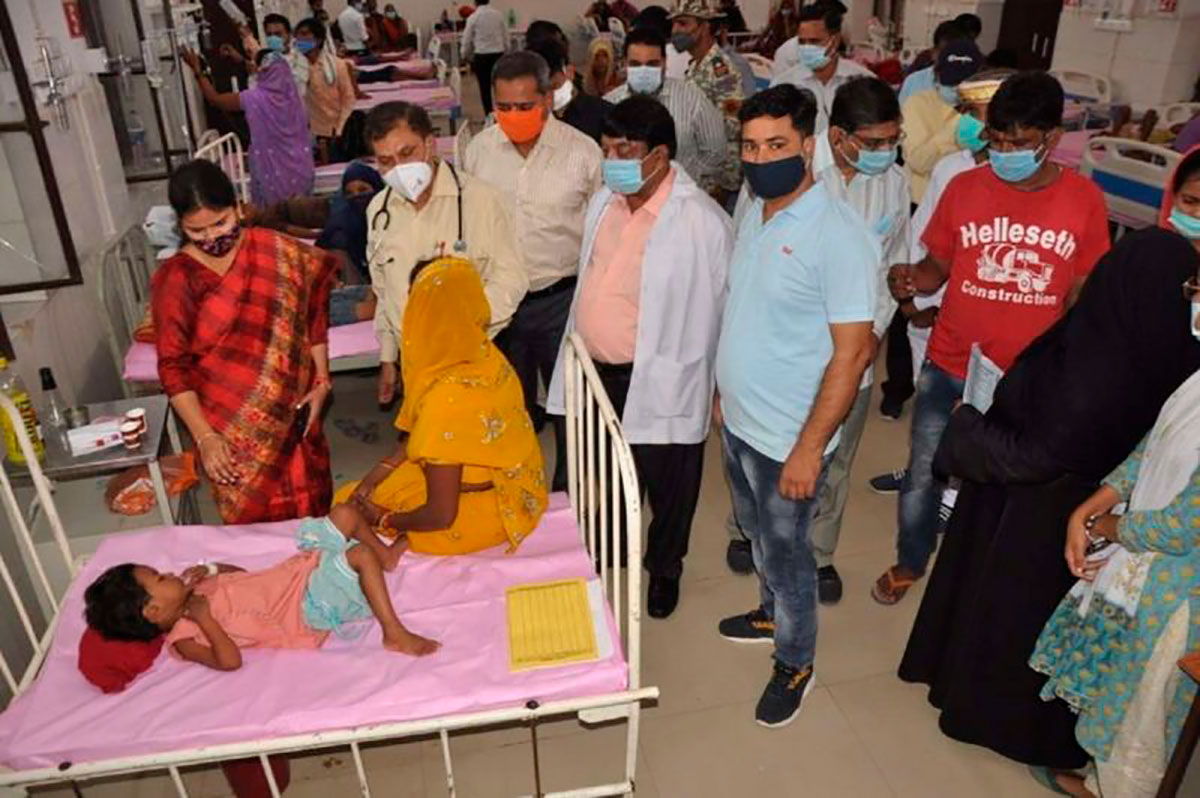 For more than a week, children in some districts of the northern Indian state of Uttar Pradesh have been waking up with a high fever and drenched in sweat.

Many of them complained of joint pain, headaches, dehydration, and nausea. In some cases, rashes have been reported that spread to the legs and arms.

At least 50 people, mostly children, have died from the fever and several hundred have been admitted to hospitals in six districts in the eastern part of the state.

None of the deceased tested positive for covid-19.

At a time when India appears to be slowly reeling from a deadly second wave of coronavirus, the deaths in Uttar Pradesh have generated headlines about a “mystery fever” sweeping through rural areas in the country’s most populous state.

Doctors in some of the affected districts (Agra, Mathura, Mainpuri, Etah, Kasganj and Firozabad) believe that dengue, a viral infection transmitted by mosquitoes, could be the main cause of the deaths.

They say that many of the patients were taken to the hospital with a low level of platelets (blood cells essential for clotting), which characterizes a severe form of dengue.

Transmitted by female mosquitoes, dengue is primarily a tropical disease and has been circulating in India for hundreds of years.

It is endemic in more than 100 countries, but about 70% of cases are in Asia.

There are four viruses that carry the disease, and children are up to five times more likely to die during a second dengue infection than adults.

The mosquito Aedes aegypti breeds in and around homes in containers containing fresh water.

“Humans provide breeding grounds and only they can prevent them,” says Dr. Scott Halstead, one of the world’s leading experts on mosquito-borne viruses.

“The combined impact of covid-19 and dengue epidemics can have potentially devastating consequences for populations at risk,” according to the World Health Organization (WHO).

However still it is not clear whether a dengue epidemic is solely responsible of fever-related deaths in Uttar Pradesh.

In a state with more than 200 million people and traditionally poor sanitation standards, high levels of malnutrition in children and irregular medical care, cases of “mystery fever” are regularly reported after monsoon rains every two years.

Outbreaks of mosquito-borne Japanese encephalitis, first identified in Uttar Pradesh in 1978, have claimed more than 6,500 lives since then.

The disease spread primarily through Gorakhpur and the adjoining districts bordering Nepal in the foothills of the Himalayas, all low-lying and flood-prone and providing a breeding ground for mosquitoes that carry the virus.

A vaccination campaign, which began in 2013, has caused a drop in cases, But the children keep dying

Seventeen children have died of Japanese encephalitis in Gorakhpur so far this year and 428 cases have been recorded.

In 2014, amid rising deaths from encephalitis and myocarditis (inflammation of the heart muscle), scientists examined 250 affected children in Gorakhpur.

They found that 160 of them had antibodies against the bacteria that caused what is known as bush fever.

Also called scrub typhus, it is a bacterial infection spread through the bite of infected viral mites.

These settle in the flourishing vegetation of the villages after the monsoon rains.

The scientists found the mites in the firewood that the villagers stored inside their houses.

In a separate study, the scientists also found that scrub typhus and dengue were primarily responsible for the fever cases that followed the monsoon in six districts of eastern Uttar Pradesh between 2015 and 2019.

Another life-threatening bacterial infection called leptospirosis, which is passed from animals to humans, and chikungunya, a mosquito-borne disease, explained the other fever-causing pathogens.

“So there were several fever-linked illnesses in the region after the monsoons ended,” says V Ravi, a professor of virology at the National Institute of Mental Health and Neurosciences (Nimhans), who led the second study.

“Systemic surveillance is needed to track and treat these diseases,” he added.

Earlier in 2006, scientists investigated another “mysterious” outbreak of fever-related deaths among children in Uttar Pradesh.

This time they found that the children had died after consuming cassia beans, that grew abundantly in the western part of the state.

This food poisoning was the result of “poverty, hunger, lack of parental supervision, ignorance, children playing alone, unavailability of toys and easy access to the plant,” the scientists concluded.

Clearly, only further research and genome analysis will reveal whether the latest wave of “mystery fevers” in India was triggered by dengue alone or by a number of diseases.

This would mean training local clinics and hospitals in collecting samples from people with fever and sending them to labs for genome testing.

Also, there is no clear record of how these fevers started and progressed; and whether the severity of the condition was determined by the long and arduous trips people have to make to government hospitals for treatment.

Or if the affected children suffered from other conditions such as tuberculosis.

If the cause of the mysterious deaths is only dengue, this points to the government’s mosquito control programs, largely ineffective.

The intensity of transmission, according to Dr. Halstead, can only be determined by antibody tests, called serological surveys, by age group.

“If we do not investigate properly and regularly, many things will remain a mystery,” says an Indian virologist, who prefers to remain anonymous.