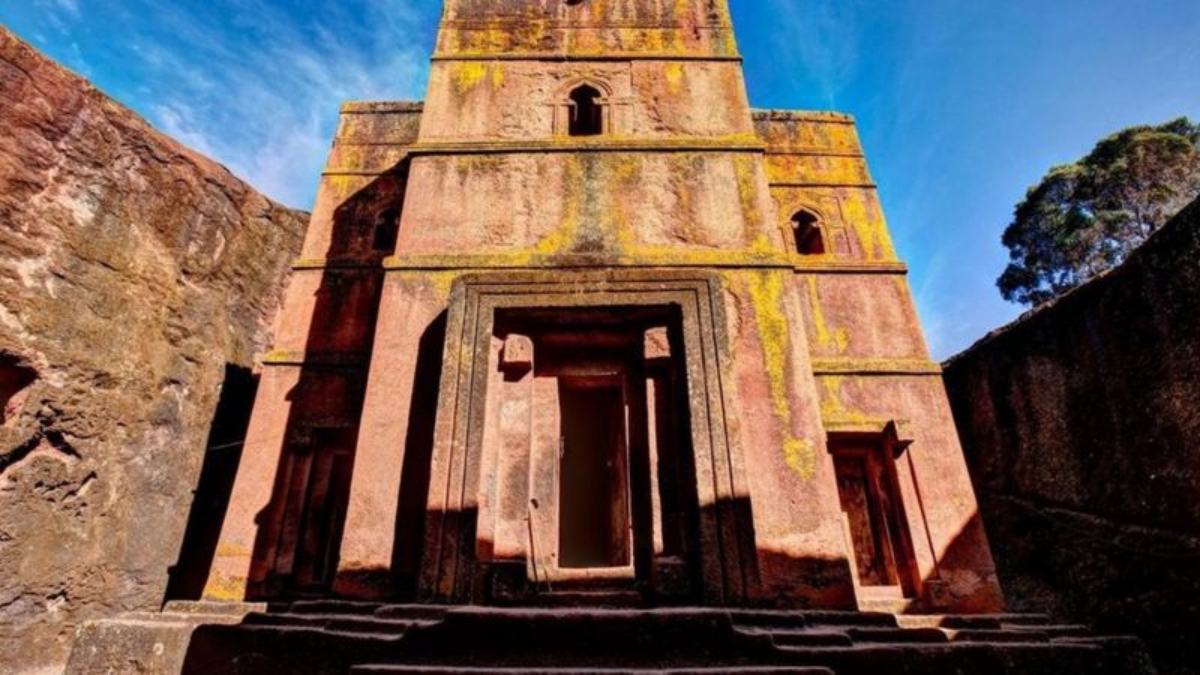 Rebels from the Tigray region of northern Ethiopia have taken control of the town of Lalibela, a site of the pUnesco world heritage in the neighboring region of Amhara.

Here is a 2017 report by BBC journalist Jack Barker on Lalibela, home to 13th-century rock-cut churches Y a sacred place for millions of Orthodox Christians which was declared a World Heritage Site in 1978.

Officially Christian since 330 AD, Ethiopia claims to be the country follower of this religion oldest in the world.

Despite being devastated by poverty, the faith has stood strong there throughout the centuries; the medieval rock churches of Lalibela are clear proof of this.

Each of the 11 monolithic structures is dramatically inserted into the mountainous landscape, sunk 40 to 50 meters into the ground and perforated with chiseled cross-shaped openings to allow sunlight to penetrate into its empty interior.

There is various theories around the creation of these extraordinary places of worship.

The most widespread hypothesis – and the one propagated by the small museum located near the entrance of the churches – is that they were carved under the orders of King Lalibela, Emperor of Ethiopia from the late 12th and early 13th centuries, who visited Jerusalem in 1187 just before the Holy City fell to Muslim forces.

King Lalibela built these churches in the part of Ethiopia on the Jordan River, with the intention of welcome Christians to a “New Jerusalem”.

However, the museum does not seem to emphasize this theory.

Their construction tools display includes only a fragile adze, an ax-shaped tool that King Lalibela’s servants supposedly used to carve churches from the ground.

Even with 900 years of wear and tear on these churches, the tool seems better suited for pulling weeds out of the ground than for carving rocks.

In just one night

The thousands of faithful who attend the daily services inside the churches accept a much more divine explanation: that King Lalibela was helped by an army of angels, who completed all 11 churches in one night.

From a distance, the only sign of these underground temples is the flow of people in and out of the crevices.

The visits have to be timed for times when congregations dwindle, using breaks in daily services to agree which passageway, sometimes just wide enough for a single person, leads underground.

With my hand against the wall, I slowly descend into the shadows.

Even between prayer sessions the churches they are never empty.

A group of elderly believers watch me, leaning unsteady on the prayer sticks, as I untie my hiking boots and add them to the small pile of flip-flops and slippers lying outside.

When I enter Biete Golgotha ​​Mikael, considered the burial site of King Lalibela himself, the threadbare red carpet does little to mask the feeling of cold stone under the soles of my feet.

My eyes adjust to the darkness and a medieval figure takes shape: it is Saint Peter, imprinted on the wall of New Jerusalem for eternity.

Narrow passageways and tunnels lead me from church to church.

But one is apart. Of the 11 houses of worship in the complex, Biete Giyorgis, near the labyrinth of the other interconnected churches, is the most memorable.

Its cross shape, immaculately buried in a gentle rocky slope, is crowned by a coptic cross that can only be seen from above.

Its steep walls have been tanned over the centuries and it plunges 40 meters into the abyss that surrounds it.

Despite being exposed to natural elements, the structure is preserved, and gracefully survives its nine centuries of existence.

Not all of them have done so well.

Biete Medhane Alem, considered the largest monolithic church in the world, is protected by a UNESCO metal plate, to prevent further erosion. And the walls of Biete Abba Libanos have some alarming cracks.

Noting these signs of decay, I had my doubts about the divine origins of the churches: surely If the Lalibela churches had been built by angels, they would all be in perfect shape.

But as I emerged from the carved tunnel that led to Biete Giyorgis, I realized that it didn’t matter how they were built.

Far below, a new wave of visitors passed through the church’s imposing stone doorways, lintels that have been smoothed over the centuries.

They descended into the earth, disappearing into the darkness of the monoliths and emerging again, after passing through the structures, to return to the sunlight.

At the edge of the crevices, the young helped the old to navigate the sloping paths.

I stayed for several minutes to watch the seemingly endless stream of pilgrims return to the surface.

They had faith, and that was enough.

Read the original story in English on BBC Travel