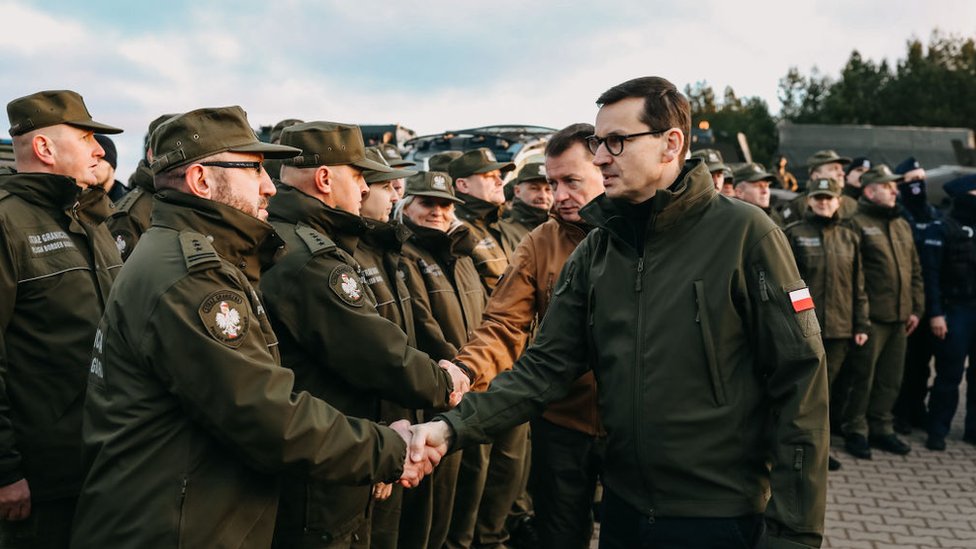 It is an exceptional measure that has only been invoked a handful of times and only applies in emergency situations.

In fact, that handful of times has been in this century. It was never invoked in the 20th century, not even during the height of the Cold War.

The Prime Minister of Poland, Mateusz Morawiecki, announced this Sunday that he is in talks with the governments of Lithuania and Latvia on the possibility of invoking Article 4 of the NATO Treaty, with a view to addressing the existing crisis on its border with Belarus.

Since last August, thousands of men, women and children have been gathering on Belarus’ western border with Poland. Most are migrants from Iraq, Syria and Yemen who traveled from their countries by plane to Minsk, hoping to then be able to cross to the border to request asylum in the European Union (EU).

Both the EU and NATO they have accused Belarus of using migrants as a political weapon.

“The North Atlantic Council strongly condemns the continued instrumentalization of irregular migration artificially created by Belarus as part of a hybrid action directed against Poland, Lithuania and Latvia for political purposes,” NATO said in a statement last Friday.

The EU has also accused the government of Belarusian President Alexander Lukashenko of organizing a plot to make immigrants believe that they will be able to easily enter EU territory.

Lukashenko has denied that his government is facilitating the arrival of migrants to the EU, which does not seem to have served to calm the discontent of their Polish neighbors, who seem determined to go further to end this crisis.

A threat to territorial integrity

“It is not enough that we publicly express our concern. Now we need concrete steps and the commitment of the whole alliance“Prime Minister Morawiecki said on Sunday about the desirability of having NATO support.

This Monday, the presidents of Lithuania and Latvia announced that they would support Poland if it decides to request an emergency meeting of NATO, invoking article 4 of the Treaty of that organization.

This article establishes that the members of NATO “shall consult each other when, in the opinion of any of them, the territorial integrity, political independence or security of any of the Parties is threatened“.

That rule was never used during the 20th century and has only been invoked six times.

Turkey has been responsible for doing so five times, most recently in February 2020, following incidents in Syria in which several Turkish soldiers lost their lives.

Ankara invoked article 4 on two other occasions for events related to the war in Syria in 2012.

He also resorted to this mechanism in 2003, on the occasion of the war in Iraq, and in 2015, after suffering two bomb attacks that left 98 dead.

The other country that has invoked article 4 was Poland, which did so in March 2014 in the face of rising tensions between Russia and neighboring Ukraine.

Much more than a political “consultation”

Although Article 4 of the NATO Treaty talks about “consultations” between member states, it should be noted that this does not refer to the daily exchanges of opinions and points of view carried out by governments with a view to coordinating possible actions, but rather to a type of dialog that is established for respond to emergency situations.

As Sherrod Lewis Bumgardner points out in an article published by the International Law magazine of Emory University (USA), as early as 1954 the first NATO Secretary General, Lord Ismay, stressed that the consultations provided for in Article 4 were conceived as a kind of deterrent measure prior to an armed attack.

Lord Ismay considered that this article reinforced the guarantees of mutual assistance in the face of armed aggression provided for in articles 3 and 5 of the NATO Treaty.

“East [el artículo 4] it applies if the security of one or more NATO countries is threatened, ”he wrote in a book about the first five years of the alliance’s life.

Although the invocation of Article 4 has occurred rarely, it has led to some concrete actions.

Thus, for example, when Turkey resorted to this mechanism in 2012 due to the war situation in Syria, it managed to get NATO to deploy Patriot defense missiles in its territory to help protect its territory.

Similarly, in 2014, when it was invoked by Poland due to tensions between Russia and Ukraine, the NATO countries decided suspend civil and military cooperation with Moscow.

To be able to make decisions on the basis of Article 4, however, unanimity is required among the representatives of the 30 NATO member countries.

This Monday a step was taken in that direction with the change of position of the President of Lithuania, Gitanas Nauseda, who on Tuesday, November 9, had said that there was no need to invoke Article 4, which he described as a “last resort”.

On Monday, however, he announced that he would back Poland if it decided to invoke him.