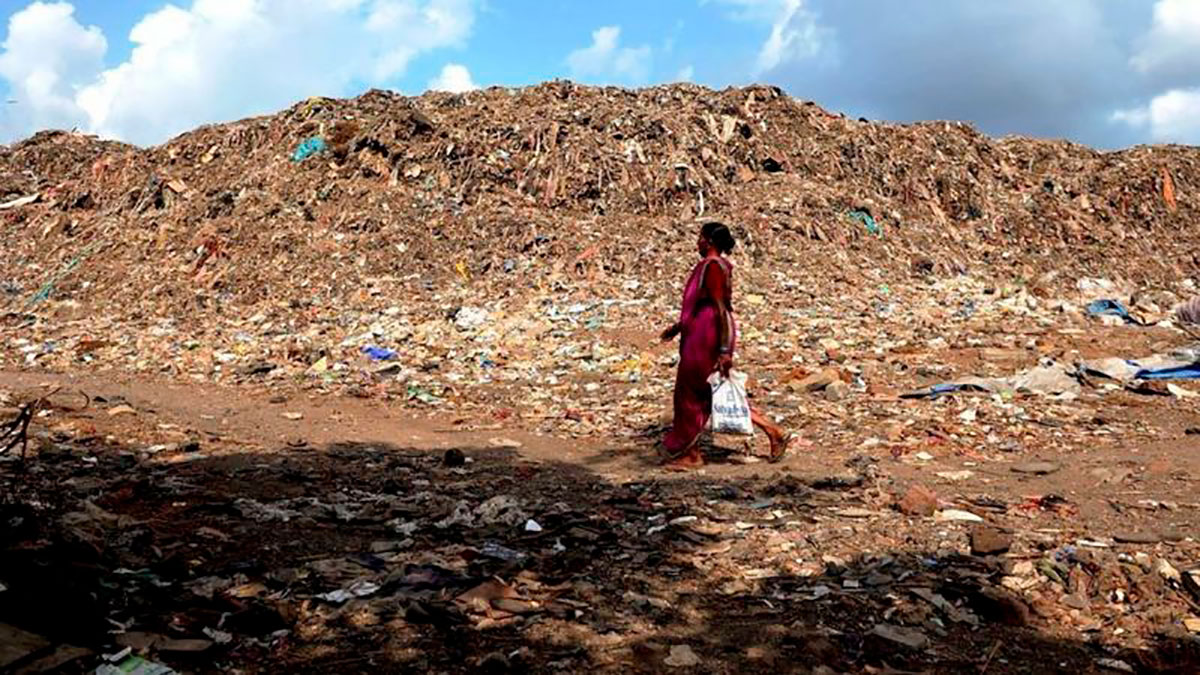 India’s “mountains of garbage” will soon be replaced by waste treatment plants, Prime Minister Narendra Modi promised earlier this month. Saumya Roy * writes for the BBC about the oldest of them all, as tall as an 18-story building, located in the western coastal city of Mumbai.

Every morning Farha Shaikh stands atop a century-old mountain of waste in Mumbai, waiting for the garbage trucks to come up.

This 19-year-old has been rummaging through this suburb of Deonar landfill for as long as she can remember.

He usually recovers plastic, glass and wire bottles from the viscous waste, which he then sells in the city’s thriving waste markets.

But most of all Look for broken cell phones.

Every few weeks Farha finds a “dead” cell phone in the trash and with her meager savings repairs it.

Once he comes to life, he spends his afternoons watching movies, playing video games, texting, and calling his friends.

When days or weeks later the device stops working again, Farha’s connection to the outside world fades.

Then he goes back to the long days of rummaging through the garbage, to get bottles to sell and cell phones to restore.

More than 16 million tons of waste they form the Deonar garbage mountain, eight of them spread over an area of ​​121 hectares.

You can see the sea from the top and shantytowns have been built on the solid heaps of rubbish.

And in 2016 it was the scene of a fire that burned for months and filled much of Mumbai with smoke.

According to a study that India’s pollution regulator carried out in 2011, other similar fires contributed 11% of the particulate matter that floods the air of Mumbai, one of its main causes of pollution.

The surrounding neighbors have been fighting in court for 26 years, demanding closure from the Deonar landfill.

But that mountain of garbage is no exception in the country. An investigation carried out in 2020 by the Center for Science and the Environment (CSE), a think tank An independent New Delhi-based company identified 3,159 such mountains across India containing 800 million tonnes of debris.

These have for years been a headache for officials and politicians.

On October 1, Modi announced a nearly $ 13 billion “national cleanup program” that will include the installation of a series of sewage treatment plants to gradually replace outdoor garbage dumps like Deonar’s.

But experts are skeptical.

“While it has been achieved in smaller cities, it is difficult to provide a solution for mountains of waste on this scale,” says Siddharth Ghanshyam Singh, deputy director of programs at CSE.

“It is recognized that it is a problem, but we have accepted that if we are going to live in big cities like Bombay or New Delhi these mountains of garbage are going to be there,” says Dharmesh Shah, country coordinator of the Global Alliance for Incinerator Alternatives. , a coalition of groups advocating for waste reduction.

Since 2000, India has passed regulations that oblige municipalities to process waste.

But most states report only partial compliance and not enough waste treatment plants.

Mumbai, India’s entertainment and commercial capital and home to some 20 million people, has just one such plant.

Now there are plans to install a plant that converts waste into energy at Deonar.

Modi said he hopes the plan will create new green jobs. But this worries collectors like Farha who have been dedicated to it all their lives.

Although since the 2016 fire, accessing the Deonar garbage mountain has become more difficult.

Collectors who manage to sneak in are often beaten, detained and expelled, although some bribe guards or enter the landfill before dawn when security patrols begin.

But that’s not the only reason Deonar’s garbage collectors have seen their way of life. And now a large part of the waste separation is done in the city.

As a result, Farha has not had a phone for months. And she is forced to bribe the guards with at least 50 rupees (US $ 0.67) every day to enter and work on the Deonar grounds.

To get this back even he thought of searching through the garbage that began to arrive from the halls of the hospital where patients were cared for from covid-19 last year.

But his family asked him not to collect such “harmful” waste.

So now he’s sticking around, watching the pickers wearing protective gear to keep picking up plastic in the rain to resell.

The city was sending out new trash and, as they had for years, the mountains had to accommodate it and the collectors had to collect and resell it.

“Hunger will kill us if disease doesn’t kill us,” says Farha.

* Saumya Roy is a journalist based in Bombay and author from the book Mountain Tales: Love and Loss in the Municipality of Castaway Belonging (Profile Books / Hachette India).