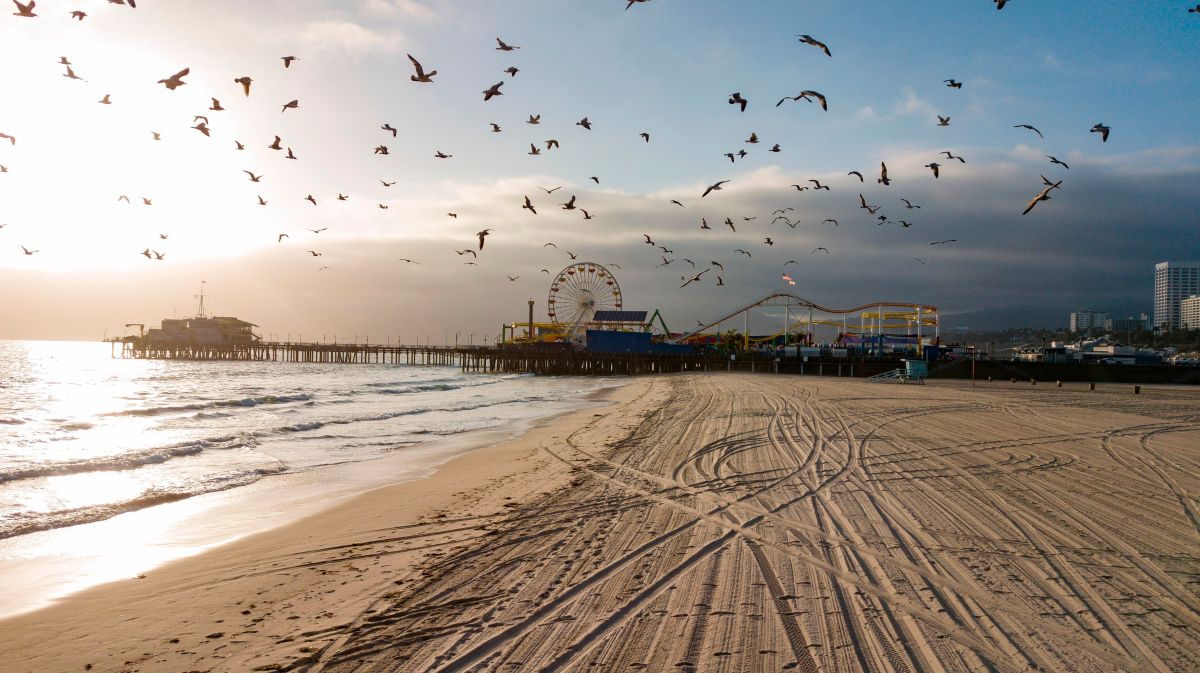 Carmen García has been an itinerant fruit vendor for the last four years and has the necessary permits to offer her products in the city of Santa Monica.

Each month she and her husband must make sure they have $750 to pay rent for “the police station,” the place where they keep their five fruit carts. In addition, they try to have enough money to buy supplies, pay permits, gas, the salary of two employees and their personal expenses.

However, despite the effort they make to get their daily livelihood, García and her husband say they have recently faced several chaotic situations with the city authorities.

“I have been fined for supposedly selling in the wrong place, for having tinted windows… My husband was fined because, according to his truck, he was carrying a lot of weight,” García said. “They [autoridades] They killed the vendors who did not have permits and now they come with us”.

Two weeks ago Garcia was arrested and taken to jail for several hours. She was released on bail and now she faces three charges against her, including resisting her arrest and assaulting a police officer.

He indicates that this happened after he refused to have his fruit cart inspected, which at the time was completely closed. A video shows how the agents open it up and start throwing the fruit into black bags.

“I feel frustrated because in a matter of seconds you react and [estás en una situación de] get trampled or fight,” said the vendor.

Although fruit vendors have been in town for many years, more vendors without permits have recently been spotted offering everything from fresh waters and pork rinds to popsicles and hot dogs.

Sergio Jimenez, an organizer with Community Power Collective, said that on average up to 40 vendors can be seen on and around the Santa Monica Pier.

It indicates that they began to arrive during the worst days of the pandemic when businesses were closed and it was recommended that people who were going out do so outdoors. “The need and the environment made it grow into something bigger,” he said.

He added that business owners have complained that street vendors prevent entry to their establishments or that they do not respect the designated distance of locating at least 25 feet.

The current problem, according to Jiménez, is that the city of Santa Monica continues to enforce the law without providing adequate education to vendors.

“Santa Monica does have permits for vendors but only for those who do not sell food,” he said. “If they see someone selling hot dogs they encourage them to get a permit which they can’t.”

The organizer said the vendors are not going to leave Santa Monica and that it is better if the city works with them to reach a common agreement. “Hunger is more puny than [cumplimiento de la ley] and they are going to continue organizing themselves,” he said.

The City of Santa Monica is proud to say that for over 30 years it has supported street vendors including those who work on the docks, on trucks and at Farmers Markets.

“In 2019, we were one of the first cities in the region to create a permit program for street vendors… It is inclusive and accessible with very low fees and we decided not to impose these insurance requirements so vendors could obtain permits,” he explained. Anuj Gupta, Santa Monica City Supervisor.

He indicated that they granted more than 100 permits to street vendors to work in the city.
However, he puts it, from the beginning it was made clear that it was not allowed to sell on or near the dock for reasons of public safety.

“The pier, as you may know, is made of wood, it is more than 100 years old. [de antigüedad] and it doesn’t have a big sprinkler system on top so it’s flammable and we can’t have a lot of the unregulated propane tanks and other fuels that unauthorized vendors use,” Gupta said. “And that was happening at a really unsustainable and frankly very dangerous level of creating a real fire risk.”

He added that another problem has been access and public safety and emergency impacts on the pier.

“So we established a task force across all of our departments, including our code enforcement, our fire department, and our police department.”

All this in order for sellers to comply with the rules in place. Gupta said that for years they have consistently advised vendors who are violating the rules when they don’t have a permit, telling them where they are allowed to be and what they must do to get one.

However, he acknowledged that it is currently very difficult for vendors to obtain a food vending permit from the County Department of Public Health.

“We will be supporting changes in the law to reform the state retail food code and make it easier and more convenient for vendors to obtain a food permit and public health permit so they can sell legally and safely in Santa Monica. Gupta said.

While that is happening, vendors like García say they live in fear but they cannot stop working because that is their only source of income. “When the high seasons come, things go well for us, but right now we barely make it for the day,” Garcia explained.

He said that if he had the members of the city in front of him, he would tell them to let those who have permits calmly sell and if it bothers them that they are in a certain place that they assign one to them.

“Because right now we have to be moving all the time, if we don’t, we get fines at home,” Garcia said.

Cynthia Anderson-Barker, pro bono legal counsel for the street vendors, said it’s unfair that they are being fined up to $1,000 just for selling on the street or cutting fruit from carts.

“We want them to find solutions to comply with the health department.”