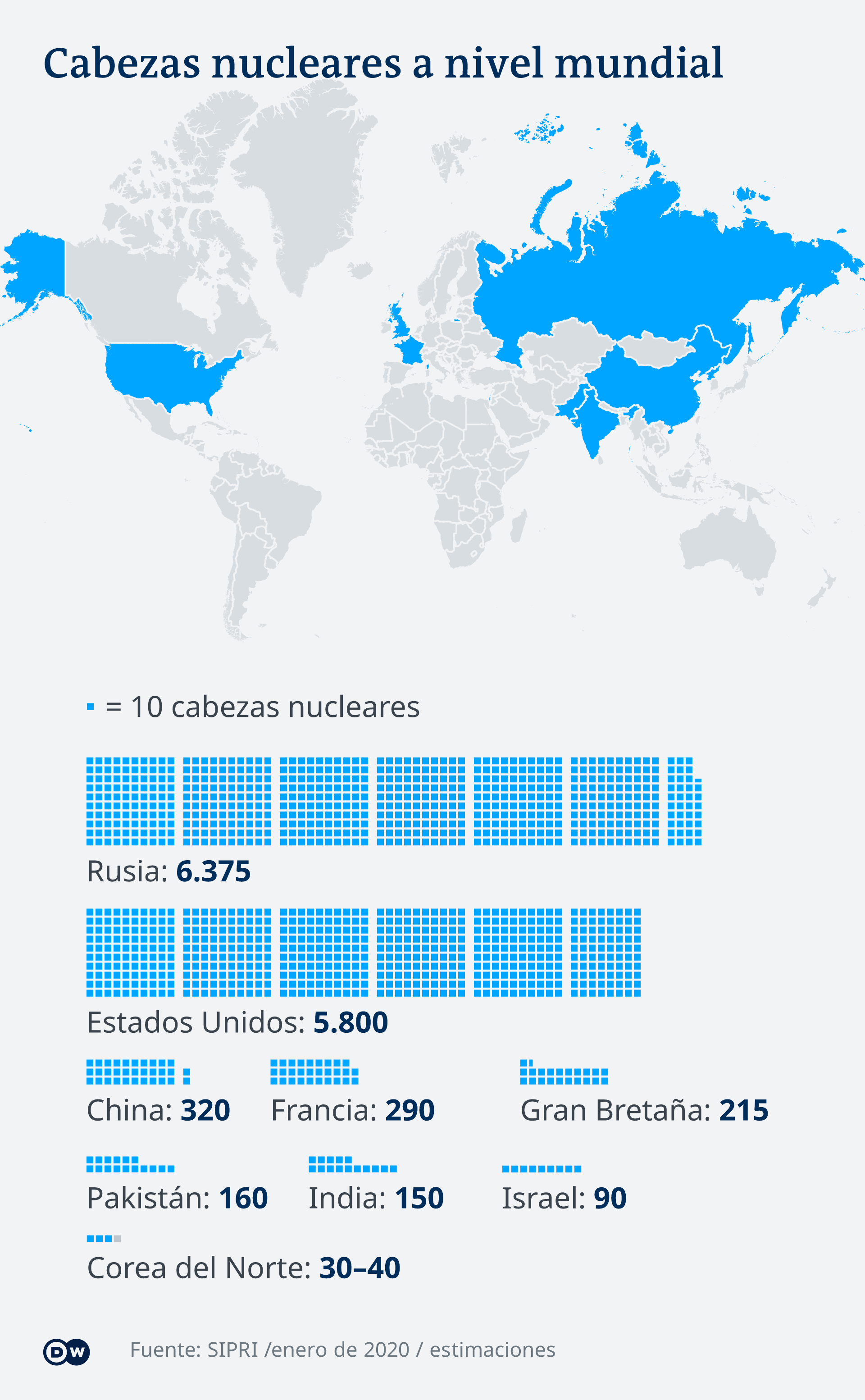 When Russian President Vladimir Putin put his nuclear forces on “alert” status at the start of the war in Ukraine, there was great unease in Europe.

After that first warning, the Kremlin chief sent atomic-armed submarines and mobile missile units to carry out exercises. Is Putin threatening the West with an atomic attack?

Russia has the largest nuclear arsenal in the world., with more than 6,300 atomic warheads, while the United States has approximately 5,800. It is estimated that France has almost 300 and the United Kingdom about 215.

Although there is talk of an American “atomic umbrella”, a nuclear attack against Europe could not be avoided militarily. Rather, it is assumed that an adversary would not dare to attack a NATO country with atomic weapons, because he would have to count on a counterattack.

United States, Great Britain and France have strategic nuclear weapons that can be operated, for example, from atomic submarines, and would enable a counterattack in any imaginable scenario.

The psychology of deterrence

The nuclear powers of NATO handle various concepts of deterrence. France and Great Britain bet on a basic deterrence. They do not foresee a nuclear confrontation lasting several days and consider it sufficient to have the capacity to retaliate or launch a “final warning shot” (France) to stop the adversary.

The United States, on the other hand, envisions a broad deterrence, which also includes low-power atomic weapons. The underlying idea is that US military strategists are considering, at least theoretically, the possibility of a “limited nuclear war.”

From a legal point of view, practically any use of an atomic weapon would violate international humanitarian law, due to its enormous consequences for the civilian population. One conceivable exception could theoretically be a limited nuclear attack on a warship at sea.

What role does Germany play in deterrence?

Germany takes part in the European deterrence strategy with the Tornado planes of the Luftwaffe, German Air Force. Given the case, these planes, manned by Germans, would carry US atomic weapons to the target. German pilots practice at least once a year, with prop projectiles, dropping American bombs.

The Netherlands, Belgium and Italy also take part in NATO’s deterrence strategy. Between 100 and 150 B61 bombs are currently in storage in Europe. “These bombs are a relic of times past and currently have little military relevance,” says Peter Rudolf, a political scientist at the Science and Policy Foundation (SWP) in Berlin. To be able to use them, it would be necessary to first neutralize the adversary’s anti-aircraft defense, which would be imaginable at most in a major war.

Who decides on the use of nuclear weapons?

NATO has had a Nuclear Planning Group (NPG) since 1966, in which today all the countries of the alliance are represented, except France. The body holds, at least once a year, a meeting at the level of defense ministers.

On the use of American atomic weapons stored in Germany, Italy, Belgium and the Netherlands, the president of the United States decides in the first place. The country where they are located would have to authorize the dropping of the bombs with its own combat aircraft. Before such a step, consultations with other NATO allies would probably take place.

On the other hand, the French president is the only one who decides on the use of French atomic weapons. In the case of the United Kingdom, the decision rests with the British Prime Minister.