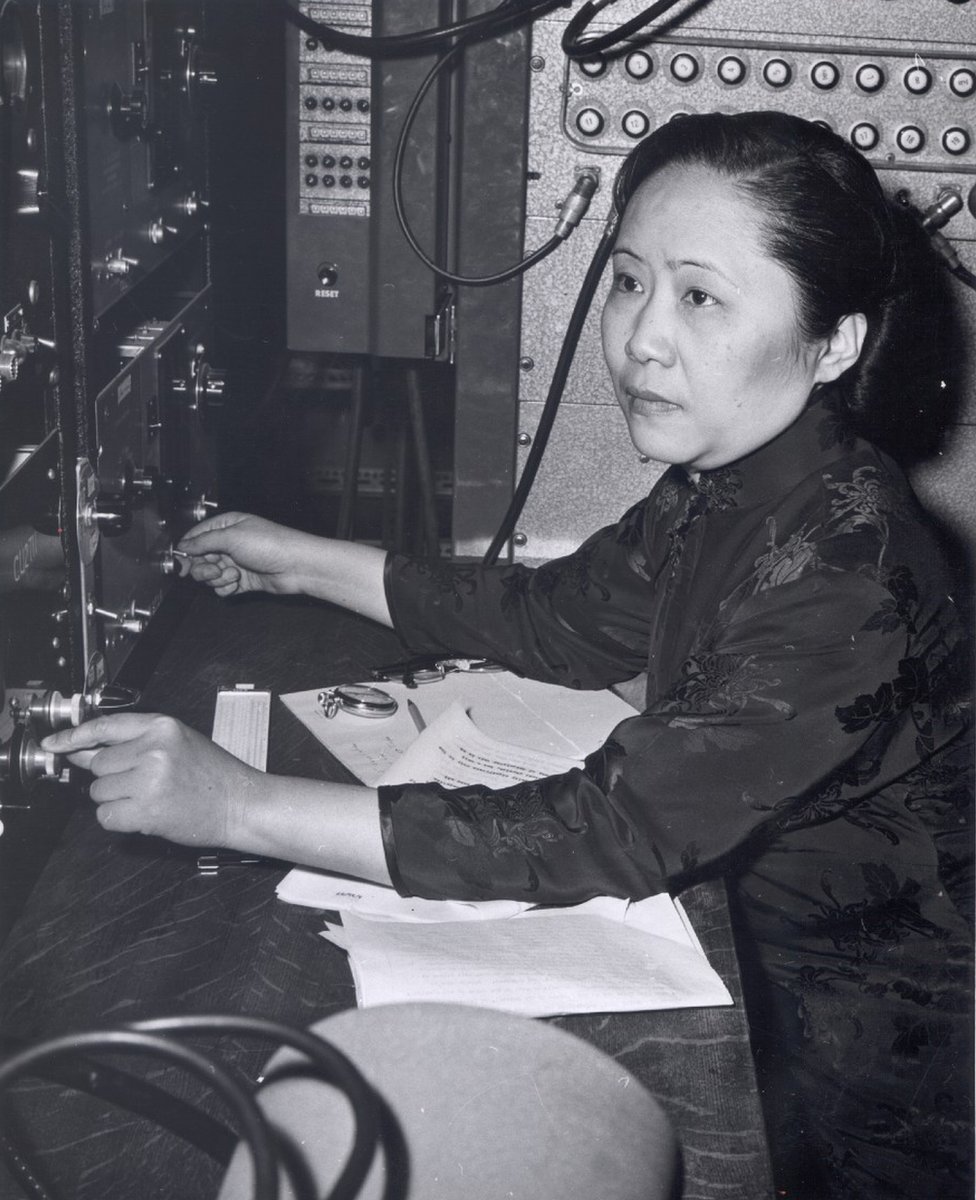 For physicist Chien-Shiung Wu, there was no time to lose, even if it meant sacrificing a trip to Europe and Asia that she had planned with her husband, fellow physicist Luke CL Yuan.

The tickets were already booked, but the experiment she had in mind had become one of her priorities, so she asked him to leave without her.

The year was 1956 and something extraordinary was about to be achieved by this researcher and professor at Columbia University in the United States.

It was the so-called “Wu Experiment”, “one of the most important of the 20th century”, says the theoretical particle physicist Miguel Ángel Vázquez-Mozo.

“The work that made her famous changed scientists’ understanding of the universe,” her granddaughter, Jada Yuan, wrote in the article. Washington Post: Discovering Dr Wu.

His meticulousness, precision and scientific elegance were already well known. In fact, among physicists of his day there was a saying: “If the experiment was done by Wu it is correct“.

They have called her the “Chinese Marie Curie”, “the Queen of the Atomic Nucleus”, “the First Lady of Physics”.

“He never won the Nobel, but his name is frequently mentioned alongside giants of physics who have won it, such as Curie, Einstein, Fermi and Feynman,” Yuan notes.

Wu was born in Shanghai in 1912, at a time when not all girls were allowed to study.

Still, she attended the girls’ school that her parents managed to found.

At age 11, she was sent to boarding school to continue her training.

“He was lucky,” Yuan wrote. And it is that she was the middle child, between two brothers, who were born “of politically progressive parents, true revolutionaries, who advocated for women’s rights and girls’ education.

Wu was beginning to train as a teacher.

“At night, however, she borrowed math and physics books from her classmates and I studied them in secret. Why Physics? She never told me, but exciting discoveries emerged in Europe and the United States in the 1920s, driven by Einstein’s theory of relativity, ”says her granddaughter.

And a woman also entered his radar, according to Xiaomeng Han in the article Chien-Shiung Wu – A Heroic Experimental Physicistfrom one of the Harvard University websites:

“Inspired by the story of Marie Curie and impressed by the rapid progress of modern physics”, she decided to embark on the transatlantic crossing to the United States in 1936.

Two years earlier, he had obtained a Bachelor of Science from Nanjing National Central University.

But staying was not an option: “there was nowhere in China to get a Ph.D. in atomic physics,” says Yuan.

He was 24 years old and, from the boat, he saw his parents for the last time.

Wu continued her studies at the University of California Berkeley and, in 1943, became one of the first physics researchers at Princeton.

In 1944, he joined the research team at Columbia University and later worked on the Manhattan Project.

In the spring of 1956, one of his colleagues, Tsung-Dao Lee, told him that he and another physicist, Chen-Ning Yang, had a hypothesis related to a notion known as conservation of parity.

“They proposed that the fundamental particle systems of nature, sensitive to the weak nuclear force, behaved differently from those with equivalent properties reflected in a hypothetical mirror or, more appropriately, those rotated 180 degrees”, explains Manuel Lozano Leyva, Professor of Atomic and Nuclear Physics and Professor Emeritus at the University of Seville.

They thus questioned whether parity was conserved in weak interactions, which was bold, since since 1925 physicists had assumed that our world is indistinguishable from its mirror image and prevailing scientific theory reflected that assumptionindicates the American Physical Society (APS, for its acronym in English).

“Yang later said that my grandmother was the only person who understood the urgency and importance of testing her theory,” Yuan wrote.

Vázquez-Mozo, who is a professor at the Department of Fundamental Physics at the University of Salamanca, explains to BBC Mundo that macroscopically, if we look at the world in a mirror we would not see any phenomenon that the laws of nature forbid.

“If you are right-handed and you reflect in a mirror, you will see yourself writing as left-handed. There is no law of nature that says everyone has to be right-handed. You are seeing something that is different, but also possible.”

“The idea that the world when you reflect it in a mirror is still possible is something that has somehow been taken for granted and not only in the world that we see around us, but in the microscopic world of elementary particles” .

But what Lee and Yang raised is that no one had tested it experimentally: “no one has proven that changing right to left, which one does when reflecting something in a mirror, has no consequences in subatomic physics”.

They investigated where it could be seen that “right and left are interchangeable or not in the subatomic world” and among the scenarios they evaluated, they pointed to beta disintegration, “which is a nuclear process in which a proton, for example, emits a electron and becomes a neutron.

“And who was the eminence at that time of the experimental study of beta decay? Wu.”

The experiment merited the use of cryogenic techniques.

“What Wu’s experiment showed is that there are certain phenomena in the subatomic world that when we see them reflected in a mirror are impossible.”

“This is why parity symmetry is not preserved in elementary particle physics.”

nature at the microscopic level yes it distinguishes right from left.

“Wu has the great merit of thinking and designing the experiment, he had the courage to do an experiment that very few groups thought to do because everyone took it for granted that parity was preserved in the subatomic world.”

“Most of the experimental groups said why am I going to do an experiment on something I already know”.

According to Lozano, this experiment is still “admirable after so many decades.”

And it is that it demonstrates “an exceptional experimental ability and a desire for rigor beyond all doubt“, Lozano tells BBC Mundo.

By Christmas Eve, the scientist already had results, but she continued, together with her team, verifying them the following days.

The professor points out that “little by little, it was discovered that the consequences of this subtle violation of symmetry explained not only many observed phenomena, but also something so essential about why there is something instead of nothing.”

“Or, at least, why our universe is made of matter with hardly a trace of antimatter.”

“That violation of symmetry predicted by Lee and Yang, but demonstrated by Wu is what, except for subtle doubts that nobody explains, allows us to exist”.

The results of Wu’s measurements “shattered a fundamental concept of nuclear physics that had been universally accepted for 30 years, thus paving the way for a physical theories reconsidered and leading to powerful new discoveries, notably a better understanding of the characteristics of elementary particles, and a more unified theory of fundamental forces.

In 1957, Lee and Yang won the Nobel Prize for this theoretical work. Wu was not included.

“Was Chien-Shiung Wu a victim of some kind of discrimination? I maintain that yes, but if such an injustice happened, tried to more than compensate. Madame Wu received positions, honors and, above all, affection from all over the world”, reflects Lozano.

Wu died in 1997, in the United States. He had visited China years before.

“In China, my grandmother was a rock star. Then, in early 2021, she too became something of a rock star here, when the United States Postal Service issued a commemorative stamp. forever in his honor,” Yuan wrote.

Wu and her husband had Vincent, who is also a physicist.

“My grandmother had that curiosity that I also see in my father, that idea that the physical world around you is something that can be deciphered, (…) that you have to be hard-working enough to discover it, that you have to want to be that detective” Yuan tells BBC Mundo.

Faced with his ambitious experiment, “he was never intimidated by logistics or conventional thinking” or because many saw it as “impossible”.

Yuan, who grew up in another part of the US, spent many vacations at his grandparents’ apartment in New York.

She says that her grandmother liked to have guests and bring the family together, that she helped her with homework, “she wanted me to do well in math and science”, and that she insisted that she practice the violin.

He would have liked to see her reaction to her decision to become a journalist “instead of a scientist”.

“I think he would have shown me a lot of support for having found a passion and that was a kind of legacy for me: