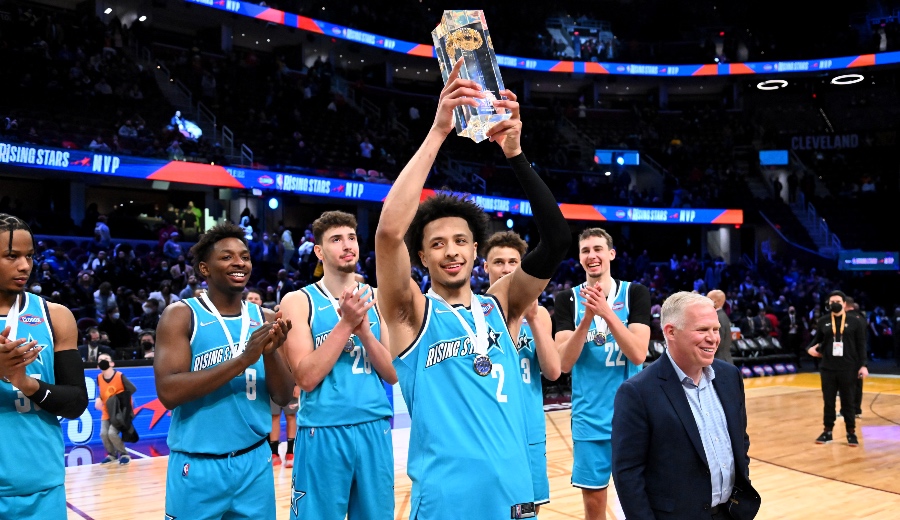 Kick-off to All-Star Weekend in Cleveland. The NBA has kicked off the weekend of the stars with the Celebrity Game, Clutch Challenge and the Rising Stars, a game made up of rookies, sophomores and 4 G League players. In the clash where the present and future of the league meet, with a novel format change, Rick Barry’s team was crowned in the Final Four and Cade Cunningham was named MVP.

Four teams, led by Isiah Thomas, James Worthy, Gary Payton and the aforementioned Rick Barry, were in charge of forming a Final Four different from the usual ones. The matches did not have an exact duration time, but depended on the score. In the semi-finals, the first team in each semi-final to reach 50 points (Isiah Thomas and Rick Barry) won. In the grand finale, the one who reached 25 (Rick Barry). A figure achieved thanks to Franz Wagner from the free throw line, in a decaffeinated outcome.

However, they were not the only protagonists. Gianmarco Tamberi, Olympic athlete and great figure in the last Olympic Games, took the applause after a flight in the Celebrity Game that left no one indifferent, as well as the participation of Scottie Barnes and Tyrese Maxey in the Clutch Challenge. In this contest designed by the NBA, players had to score from various positions on the court in the shortest time possible. A challenge that was complicated… even from the simplest positions. Finally, Desmond Bane and Ty Haliburton champions were proclaimed.

Yes, Gianmarco Tamberi himself has participated tonight in the Celebrity Game of the #NBAAllStar.

And he has done this 🔥
pic.twitter.com/9ndegwd7iA

Get your copy of the Felipe Reyes Special for February