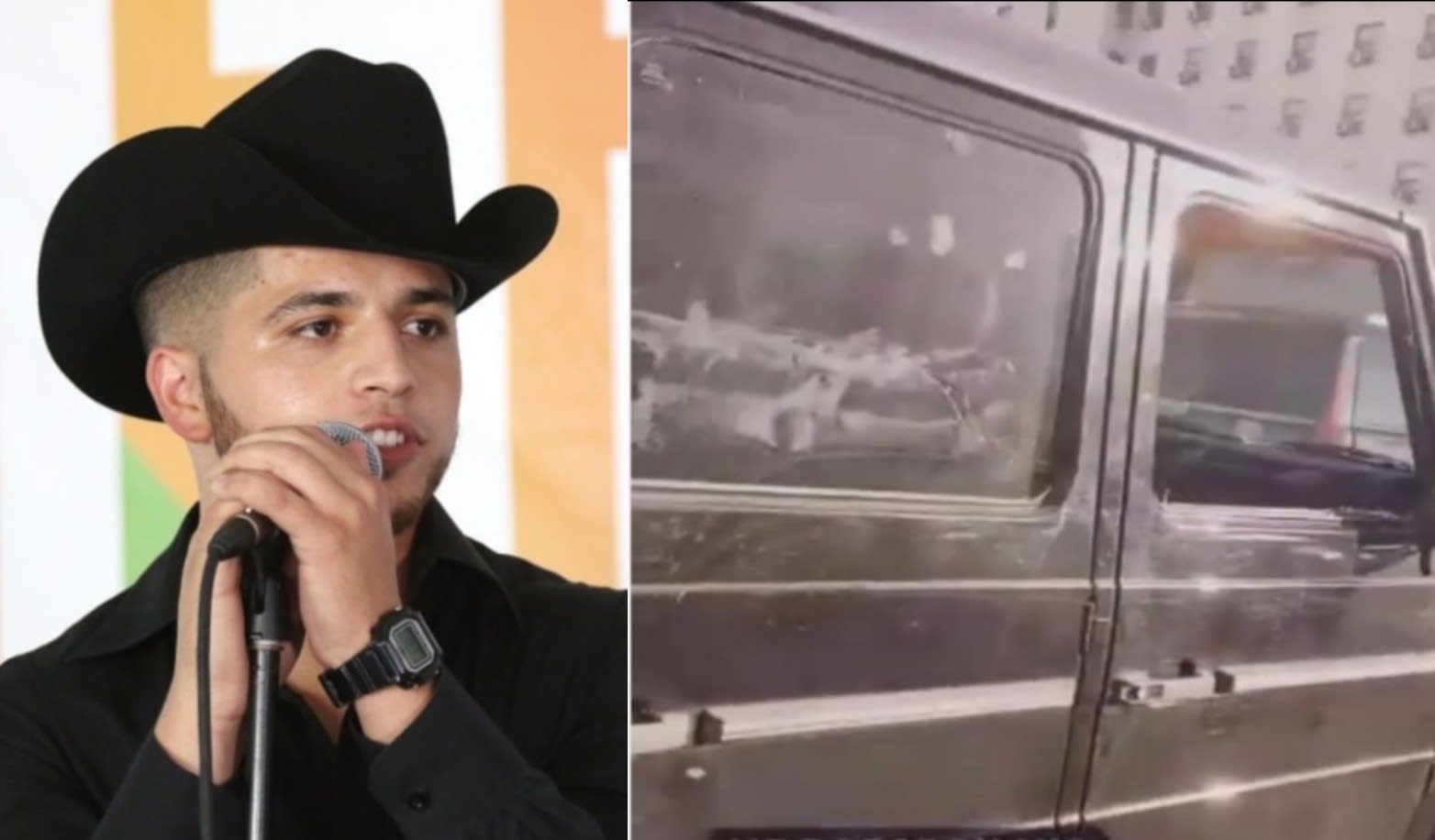 Jesús Mendoza steal belongings. While Lupillo Rivera’s ex-wife, Mayeli Alonso had to be taken to the emergency room due to a severe fall that caused a fracture in her right wrist, her ex-boyfriend Jesús Mendoza was a victim of violence in the middle of the street when he encountered a surprise when he went to view your vehicle.

Singer Jesús Mendoza, Mayeli Alonso’s former partner, denounced on his Instagram account that he was a victim of crime, with a recording where it is appreciated that his belongings that he had in his truck were stolen, which caused the artist to put an emoji of a sad face.

Jesús Mendoza is a group music singer who ‘rose to fame’ thanks to the fact that he became the boyfriend of Mayeli Alonso, who was married to Lupillo Rivera for several years, and with whom the woman lived several scandals, such as the last one in which she supposedly they threatened the young man with death.

It has been a difficult year for the singer, since first he was arrested along with his then girlfriend Mayeli Alonso, for an altercation with employees in an airline, then his break with the businesswoman became known, and now he shares how it was that suffered from vandalism, according to People en Español.

It was through his Instagram account, where the singer Jesús Mendoza shared in his stories a video where it is observed how his black truck was in the worst conditions, since it was vandalized and the belongings he had inside the vehicle were stolen. .

With the glass broken, this is how Jesús Mendoza found his truck where he said: “They stole my belongings,” he wrote adding a sad face emoji, in the recording you can see how he is approaching his already vandalized vehicle and with nothing of belongings, causing sadness in the artist.

Even in the Instagram profile of Entre Famosos Oficial, they shared in their post, the video that Mendoza made on his social network, where it is seen that his truck suffered from a theft of belongings, at the time of breaking the glass: “Jesús Mendoza denounces on Instagram that he was a victim of crime ”, they wrote in the publication.

Immediately Internet users were present in the comments to leave their different opinions, and could not miss the people who made fun of the tragedy of the former artist Mayeli Alonso, mentioning that Lupillo was going to get angry: “Lupillo is very angry”, ” they leave things to the eye of the thief ”, were some messages. TO WATCH THE VIDEO CLICK HERE

Jesús Mendoza and Mayeli Alonso would have ended their relationship

Previously Jesús Mendoza was ‘devastated’ by his alleged separation from Mayeli Alonso with whom he had been dating for several years, as some videos would confirm that Lupillo Rivera’s ex asked her boyfriend to move out of his house and he has recorded himself with words that would leave see that the situation is true.

After Mayeli Alonso ended her relationship with Lupillo Rivera for alleged infidelity of Jenni Rivera‘s brother, in addition to rumors of an alleged sexual trio that she asked him to do to ‘save’ her marriage, the ‘Rich Famous Latina’ was comforted in the arms of the singer.

Jesús Mendoza steal belongings: They are no longer followed on Instagram

The Instagram account of ‘Escándalo’ first confirmed the breakup of the couple through a capture in which it is shown that Mayeli Alonso and Jesús Mendoza no longer follow each other on Instagram, being that both use said social network to advertise their love and everything they do.

People’s comments indicated that it was a publicity stunt: “What a way to get the attention of these two. Since nobody talks about them right now ”,“ They only want to attract attention so that they talk about them but I think they want to compare themselves with people who are too big next to them literally ”,“ And she a few days ago presuming that her vato had it more bigger than Lupillo ”.

Jesús Mendoza steal belongings: A video of the alleged move was leaked

At the same time that the capture that Jesús and Mayeli were no longer being followed on Instagram was leaked, a video of an alleged move of Jesús Mendoza from the house of Lupillo Rivera’s ex was also seen, in which he wrote: “Never I thought this day would come, straight ahead ”. Here you can see the video.

“Pure pancho make those 2”, “I think only that way it draws attention !!” de Escándalo, at the same time that the journalist Javier Ceriani assured that Mayeli Rivera had run to Jesús Mendoza because they already lived together.

He is ‘devastated’ by what happened

On the Instagram of ‘El Gordo y la Flaca’, they compiled a video in which Jesús Mendoza made a live broadcast and when asked about Mayeli Alonso, he replied: “I’m making him want my people, believe me I’m really wanting , that’s why I’m not saying anything, I’m going to stay well … “, he began saying.

But implying that he is no longer a boyfriend of Mayeli Alonso, he continued: “I want you to help me well, that you are more positive with me, that you send me messages, I am here, we are simply working, wanting, working, I think that we all have problems in our lives, sometimes depressed, agitated, anxious for work ”, he commented. Filed Under: Jesús Mendoza They steal belongings.

Whoever was Mayeli Alonso’s boyfriend unburdened himself in a video

In the video, Jesús Mendoza assured that he would have the best attitude: “I think you have to live in the moment, and make yourself want it because life goes on and you have to give it a go … people ask if I’m going to cry tonight … Imagine band, norteño, tequila, I love tequila, I don’t drink that much… ”, he replied.

With a serious and somewhat calm demeanor, Jesús Mendoza did not properly mention Mayeli Alonso but without a doubt in his words he was referring to the fact that he is probably no longer her boyfriend: “If they are going to cry with me on stage, I want them to cry with joy because we’re not going to cry out of sadness… ”, he said. Filed Under: Jesús Mendoza They steal belongings.

On the road, the now ex of Mayeli Alonso answered questions from his fans

And when someone mentioned Mayeli Alonso, whoever was her boyfriend, he bluntly mentioned that he did not want to talk about anything: “No, I don’t want to talk about anything, I want to make him want to today, I’m focused, believe me I had a lot Without being on stage, being with the public and for me is something very special and believe me that everything is going to be fine, ”said Jesús Mendoza.

People called him ridiculous and absurd for not confirming outright that he is no longer Mayeli Alonso’s boyfriend: “Che ridiculous! That he has to go whining, for sure he is going to put out some spicy little song !!! And he wants attention! ”,“ He is the eldest son of Mayeli Alonso! ”,“ Another kept one ”,“ He looks happier than when he appears on video with Mayeli !! they will go out with their things pure publicity !! ”. Here you can see the video of Mayeli’s boyfriend answering. Filed Under: Jesús Mendoza They steal belongings.

Just a few months ago, he had filled Mayeli’s house with roses for her birthday

Mayeli Alonso had her birthday a few months ago, so Jesús Mendoza filled his black truck with red roses to give them to his girlfriend, Lupillo Rivera’s ex-wife, as part of the video for his song ‘Como ella’, although they tell him that he “killed two birds with one stone ”.

Through his official Instagram account, Jesús Mendoza shared a video of a few seconds that gave a lot to talk about, since his black truck full of red roses is shown for Mayeli Alonso. “That is the most beautiful thing that can exist in life … well deserved it is, she is a beautiful and brave woman”, “How beautiful and apart it helps those who are dedicated to selling flowers”, “Were the roses for the video or did you give them to Maye or how? You killed two birds with one stone ”, you can read in some comments. Filed Under: Jesús Mendoza They steal belongings.