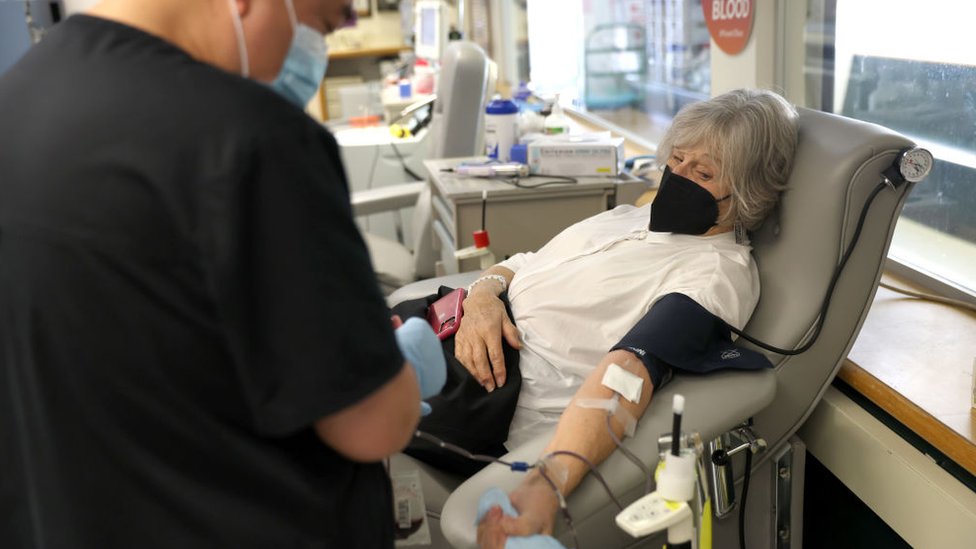 The United States health system is experiencing one of its biggest crises in a decade and not only because of the galloping increase in covid-19 cases: a large part of the country’s hospitals are running out of blood reserves.

The situation is so complicated that in the second week of January the American Red Cross, which supplies 40% of blood products used by US medical centers, declared for the first time in the country’s history a “national crisis” due to lack of blood.

In a statement together with the United States Blood Centers and the Association for the Advancement of Blood and Biotherapies, the humanitarian organization assured that some hospitals only have one supply of certain blood typesfor less than a daywhich constitutes “a dangerously low level”.

If the supply does not stabilize soon, life-saving blood may not be available to some patients when they need it.

According to official data, since March of last year there has been a general decrease of 10% in blood donations throughout the country, while a 62% drop has been reported in donation drives in schools and universities.

As the doctor explains to BBC Mundo Emily Coverley, American Red Cross hematology expert, since last year hospitals have been limited in the amount of blood they receive and, currently, up to a quarter of their demand cannot be met.

“We have reached a point where doctors have to decide every day which patients get a transfusion and which don’t and that’s just heartbreaking,” he says.

“Surgeries are being canceled sometimes at the last minute. There are people who have cancer and need a transfusion and are being sent home without receiving it. Or we have trauma centers that are reaching the point of exhausting their emergency reserves for cases like a patient who comes in critically ill with bleeding after an accident or someone with a postpartum hemorrhage,” she says.

This was the case of the Harbor-UCLA Medical Center in California, which had to stop admitting patients last week for more than two hours due to lack of blood, something that, according to local authorities, had not happened in its 30 years of service. history.

But how did this situation come about?

“January It is often one of the most difficult times of the year to collect enough blood products to meet patient needs. Winter weather can result in canceled blood drives and seasonal illnesses, such as the flu, make donors unable to give blood temporarily“, He says.

In this sense, Dr. Jennifer Andrewsdirector of the blood bank Vanderbilt University Medical Centertells BBC Mundo that the current situation has to do with a problem that began with the pandemic.

“Since March, as a result of covid-19 and lockdowns, we have seen a decrease in donor participation. And we also face challenges with blood drive cancellations and staffing limitations to run them,” she says.

The doctor Ellen Klapperdirector of Transfusion Medicine and Blood Donation Services of the Cedars-Sinai Hospitalin California, adds that the uptick in omicron infections has further complicated the scenario.

“This latest surge in cases and the widespread nature of current infections have really turned everything upside down,” he tells BBC Mundo.

Coberly points out that there have been other crises due to difficulties in responding to the demand for blood, the current circumstances make this moment one of the most critical.

“It is true that we experience blood shortages from time to time, but we have strategies to minimize the impact on patients during the period when the supply is limited or short and return to normal, hopefully, with minimal interruption,” he explains.

“The difference now is that the shortage has been severe and prolonged. It’s been weeks and months of continually not meeting hospital demand, which has led to this really serious circumstance where we’re limiting the amount of blood going out to hospitals.”

The crisis in hospitals

Andrews points out that the lack of blood, coupled with infections among staff, has led to his hospital, the main trauma center in the Nashville region, being forced to cancel surgeries.

“Unfortunately during the pandemic we have learned that there is no elective surgery when it comes to a large hospital like Vanderbilt. People come to us for life-saving procedures like liver or stem cell transplants. a delayed surgery today becomes a surgery of emergency morning“, He says.

That’s why they can’t “afford” to defer so many cases to save blood products, he argues.

“The situation here is terrible: we have to make individual decisions about patients not only every day, but several times a day,” he continues.

“We keep doctors informed about the amount of blood we have available and some of us have to tell them that we don’t have enough for their patient and that they will have to wait,” he recalls.

According to Andrews, blood transfusions are one of the most common medical procedures. According to statistics, more than 70,000 a year are performed in his hospital.

But unlike other treatments where it is possible to change the strategy or the medication, “there is no alternative to blood.”

“Various therapies and studies have been tried, but so far none have shown promising results,” Andrews says.

“I’m a pediatric hematologist, and sometimes when one of my patients needs a red blood cell transfusion but I don’t have enough to give her, her parents ask me, ‘Can you prescribe something different?’” she explains.

“There is nothing else I can prescribe, unfortunately. So they just have to wait until we have enough blood,” he adds.

Blood donations in the United States are no stranger to controversy.

The fact that, although the donations are voluntary and unpaid, distributors and processors like the Red Cross then sell the blood to hospitals is a frequent topic of discussion in forums and social networks.

And it is that the United States has a powerful blood plasma industry: Americans supply two-thirds of the plasma used throughout the world, in a market valued at $24 billion.

“The Red Cross is a nonprofit organization and we do not make a profit from collecting blood from voluntary donors,” Coberly says.

“Hospitals pay us for units of blood, with which we cover the salary of workers associated with donations, the cost of testing and processing the blood, and all the work involved in collecting those units,” he clarifies.

The current situation has also led numerous experts to question certain restrictions that exist in the United States for blood donations.

And it is that federal authorities do not allow men who have relationships with others and are sexually active to donate blood.

The ban, put in place almost 40 years after the start of the HIV pandemic, was revised last year and reduced the time required to be without sexual activity in order to donate blood. From one year it became three months, without the scientific community being very clear about the reasons.

“Certainly there is evidence and scientific reasons to change those rules. Personally, I don’t think those regulations have kept up with the science,” says Kappler.

Coberly, for his part, says the American Red Cross believes that blood donation eligibility should not be based on sexual orientation.

“We are committed to working with our partners to achieve an inclusive and equitable blood donation process that treats all potential donors with equality and respect and ensures that blood is available to patients who need it,” it says.

According to a study by the Williams Institute at the University of California Los Angeles School of Law, yes the Food and Drug Administration (FDAfor its acronym in English) will get up the prohibition that men who have sex with men donatethe annual blood supply would increase between 2% and 4% (or between 345,400 and 615,300 pints of blood per year).

The experts consulted by BBC Mundo believe that the crisis could to last weeks or even monthsand that it can have a disruptive impact on the United States health system, already hit by the increase in hospitalizations for covid cases.

“If we go to the root of the problem, everything is linked to the coronavirus. That is why I encourage everyone to listen to public health authorities and ask their doctor if they are suitable to donate,” says Andrews.

Klapper, for his part, reminds that donating blood can be an anonymous gesture that can save lives.

“We see it in hospitals on a daily basis. With a gesture like this you can bring another person back to life. We give life, we save the other when we give him a little of our blood, ”he says.

If you live in the United States and want to donate blood, you can go to the American Red Cross website, enter your ZIP code, and find the nearest donation center. You can also visit your local hospital or community medical center.

Medical authorities ensure that being vaccinated against covid-19 not a contraindication to donate blood.

However, if you are sick with COVID-19, the American Red Cross suggests waiting until two weeks after diagnosis to donate blood.

If for some reason you cannot donate, you can also help as a volunteer in blood donation campaigns or to transport blood products to hospitals.