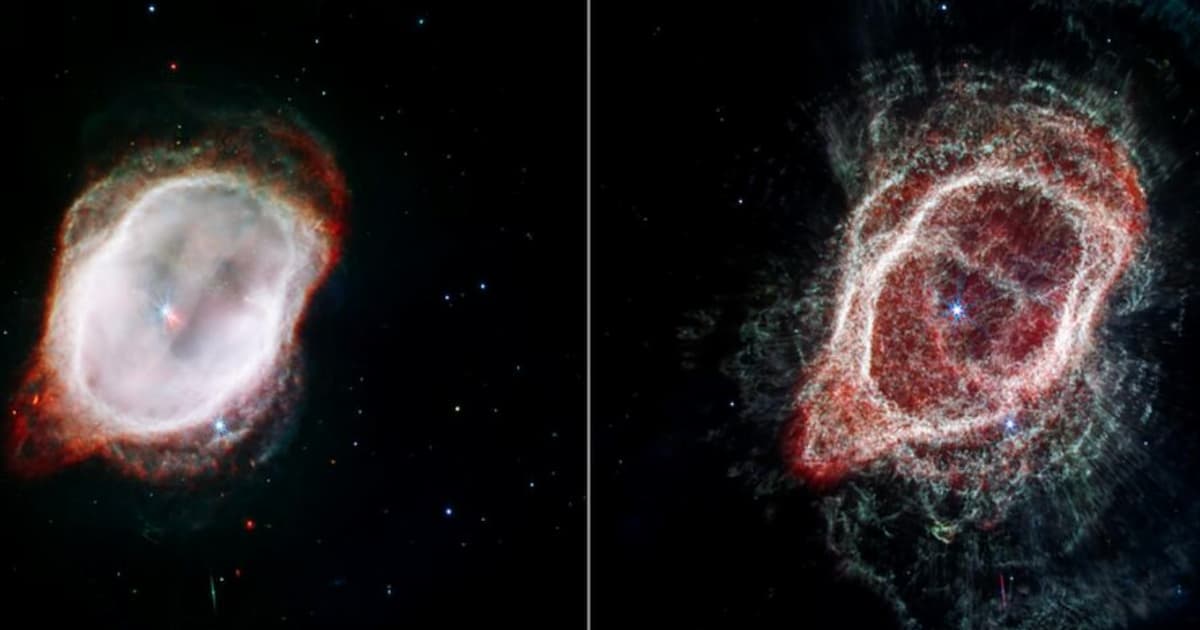 Early data from the James Webb Space Telescope have provided evidence that the intricate morphology of the South Ring Nebula was produced by the death of a star that was part of a quintuplet system.

Despite their name, planetary nebulae have nothing to do with planets; they are large clouds of gas and dust that glow when illuminated by a very hot central star. They are caused when stars like our Sun, in the last stages of their life, eject into outer space a large amount of material that ends up forming a cloud of gas and dust that expands as it moves away from the star. Precisely because of this loss of material, the star goes from being giant and cold to being extremely hot and much smaller. The intense radiation from this stellar debris (a so-called white dwarf star) ionizes the surrounding material, causing it to glow brightly.

Located at a distance of about 2000 light-years in the constellation Vela, the Southern Ring (known as NGC3132 in astronomers’ jargon) is one of the planetary nebulae with the most spectacular morphology due to its many intricate symmetries. It is not surprising that such a fascinating object was selected by the James Webb Space Telescope for one of the first observations made public last July.

At first glance, one might guess that a planetary nebula is caused by the death of an individual star. But, at least in the case of the Southern Ring, the situation has turned out to be much more complex. In the images provided by the Webb telescope, the white dwarf star, which is primarily responsible for the nebula, is very well observed in the central region. But, in addition, it is accompanied by a second, much brighter star that could have interfered with the nebular gas ejection phenomenon.

In order to determine the characteristics of the stars responsible for the formation of this spectacular nebula, an international team of astronomers coordinated by Orsola de Marco (Macquarie University, Sydney) has combined the Webb data with previous observations made by the Gaia space telescope.

The analysis of this data set has shown that the central star (now a white dwarf) was less than three times the mass of the Sun before it ejected much of its material and began the last stage of its life. After multiple explosions, the dying star has now retained only 25% of its initial mass, or only about two-thirds the mass of the Sun. Determining the initial mass of the star is essential to reconstruct the sequence of events that led to the ejection of the clouds of gas and dust that now constitute the planetary nebula.

The data analysis was complemented by numerical simulations to try to explain the complex morphology observed. The two images at the top of this article combine near-infrared and mid-infrared data to isolate different components of the nebula. The image on the left highlights the very hot gas surrounding the central stars, while the image on the right is dominated by streams of molecular gas dispersing from the central region to reach great distances in space.

De Marco and his collaborators soon concluded that the dying star needed contributions from a small group of stars in order to generate all the highly complex structures that are visible in the nebula today.

For example, the arcs observed in the outermost regions must have been created by a first companion star, while the brighter structures, which form a superposition of ovoids, can only be explained by the interaction of two additional companions that have channeled the mass loss of the dying star to create such whimsical-looking shapes.

It is true that Webb only observes one companion star next to the white dwarf, but the other members of the stellar group could be fainter and camouflaged by the brightness of the two more luminous ones. Nor can it be ruled out that during the interaction phenomena between them they might merge with the dying star.

The accompanying images show that up to 5 stars are needed to create all the morphological complexity seen in the Southern Ring. In the first picture (top left) a wide field is illustrated with stars 1 and 2: the white dwarf and its brighter companion, as observed by Webb. But, in addition, the position of a star labeled ‘5’, orbiting very close to the white dwarf, is shown. In the second and third frames we approach the white dwarf (‘1’) to distinguish the positions of stars 3 and 4, which must eject very narrow jets of matter that are responsible for certain shapes in the nebula.

In the following frames (the lower panels of the diagram) we zoom out to observe how the stellar winds, together with the ultraviolet radiation, are sculpting a series of cavities, more or less concentric. Star 1 is assumed to be surrounded by a disk of dust and the interaction of star five with this disk creates a system of large rings. The last panel (bottom right) provides a large-scale overview, showing only the white dwarf (star 1) and its brighter companion (star 2) in the center of the ring, as revealed by the Webb telescope.

The result of this work, requiring the cooperation of 5 stars, may seem surprising, but the truth is that the vast majority of stars form in binary systems, multiple or even in large swarms or clusters. On the other hand, many planetary nebulae are not spherical, but exhibit bipolar or multipolar morphologies, with signs of multiple ejections in different directions. It is therefore reasonable to think that such morphologies are largely due to the presence of multiple stars in the central regions of the nebulae.

The paper by Orsola De Marco and her team, which includes several researchers from Spanish institutions, entitled The messy death of a multiple star system and the resulting planetary nebula as observed by JWST has been published in a recent issue of the prestigious journal Nature Astronomy.