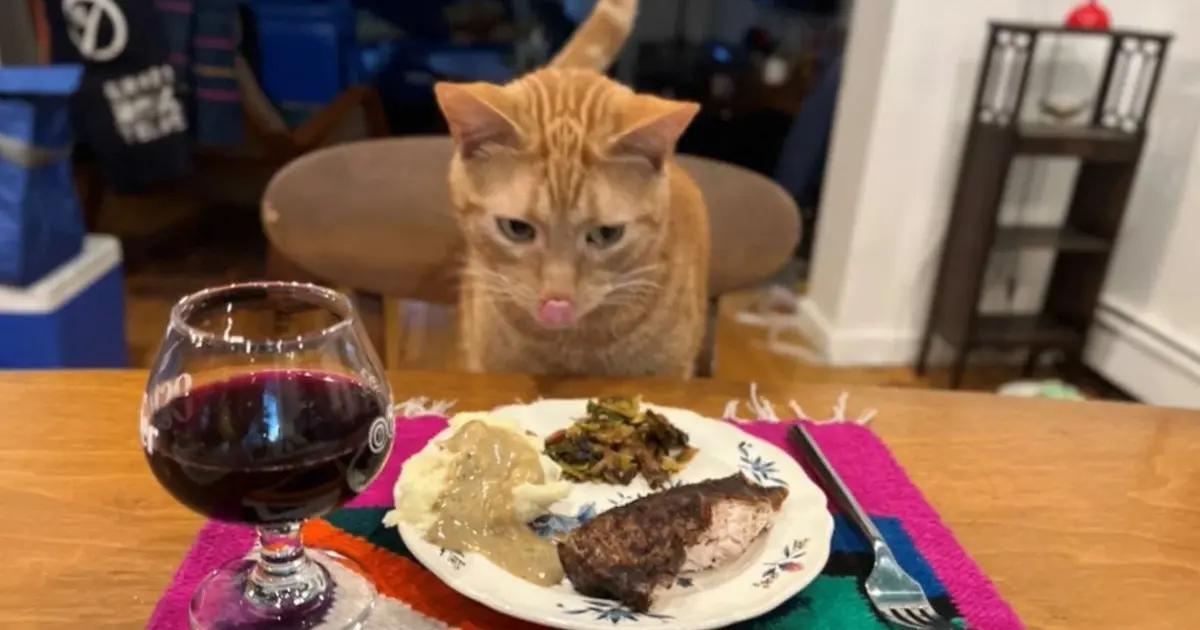 A few days ago, an orange cat with light tabby lines, identified as Smells, captured the attention of all the security measures at the John F. Kennedy International Airport in New York after being surprised inside a suitcase belonging to a passenger whose destination was Orlando, Florida.

A week after the cat tried to reach Disneyland, he reappeared on social networks along with a great Thanksgiving dinner, where he enjoyed a good cut of meat, dad’s mash, vegetables, and a glass of red wine.

Lisa Farbstein, a spokesperson for the Transportation Security Administration (TSA), shared through her Twitter account the update on the story of Smells, who was “caught” at the airport on November 16.

“Smells, the cat rescued by the TSA after he tried to sneak into a suitcase traveling to Orlando, enjoyed Thanksgiving at his home in Brooklyn. Apparently, Smells was planning to chase a big mouse that lives in Disneyland,” Lisa Farbstein wrote on her Twitter account.

Among the users who commented on the publication, the majority showed disbelief at the story because they believe a feline can’t be able to sneak that way between the suitcases, to which some lovers of these furry friends replied, “so, you have never had cats. It’s something they would do.”

Other people who have followed the case since the first TSA post on their social networks were happy to know something about Smells, several days after he was found at the airport.

The Instagram account Alex August (owner of the cat) told through his stories the entire journey of Smells to the airport; In the fixed section on his profile, you can see the photos from where he is on the X-ray screen to posing with the printed newspaper where they tell his story.

The owners of the adventurous cat gave an interview for the New York Post where they told how things happened and why it ended up in a suitcase at JFK airport in New York.

“Our cats really like to check bags and boxes, one of them got into the luggage. It was just an accident,” the 37-year-old woman told the American newspaper.

On social networks, its owners shared a video where Smells is seen trying to enter a suitcase again to show that it was not an attempted robbery or kidnapping.

There are several reasons why a cat has an extreme taste for boxes, suitcases, bags, or closed places. Curiosity is one of the main reasons why cats prefer to be inside these objects. Good animals with hunting instincts like to explore everything around them.

Like dogs, cats use their five senses to understand what is in their environment, and it is through touching surfaces and the smell of places that they begin to make relationships of what is good or bad for them. they.

The sense of security and comfort is another reason these four-legged friends prefer these places instead of their beds.

The adviser to the American Society for the Prevention of Cruelty to Animals (ASPCA), Stephen Zawistowski, explained in an interview for the YouTube channel Slate that these places give them confidence because they cannot be seen.

“ Cats like boxes because they are cryptic animals and like hiding. A box gives them a safe space for themselves”, commented the specialist.

As good mammals, cats spend most of the day asleep, so going unnoticed and not being disturbed during their almost 20 hours of sleep is very important.