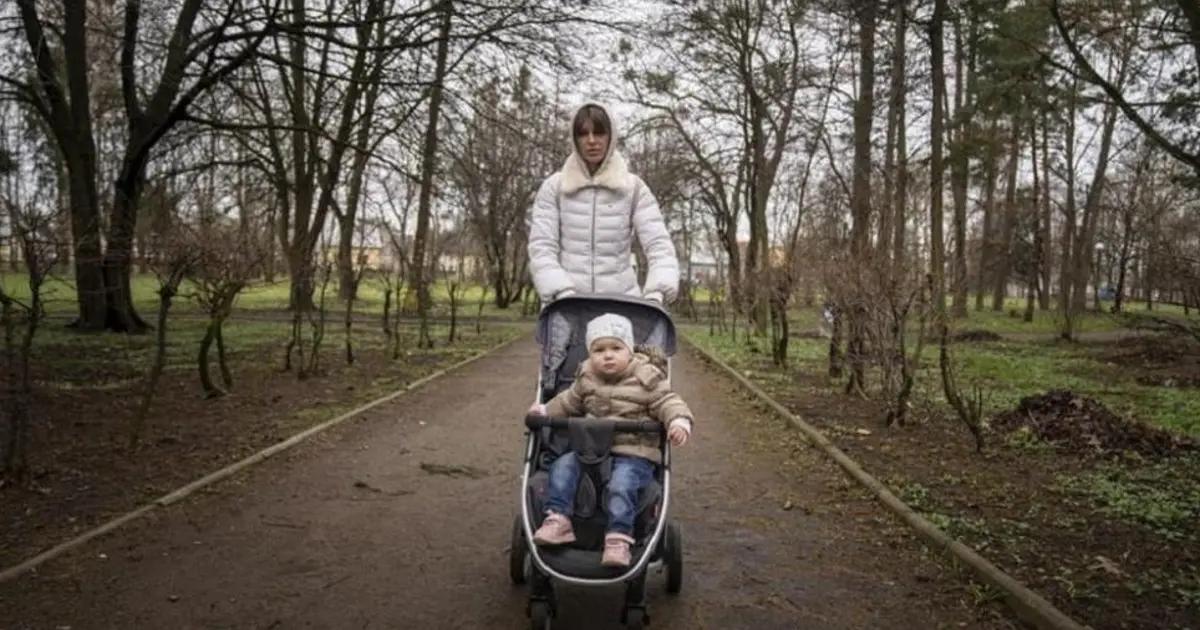 Ukrainian Viktoria Kovalenko, 34, watched her husband and 12-year-old daughter being killed by the Russians, then held captive in a basement, along with her baby; in the end, she managed to flee and now resides on British soil, where he seeks justice.

She and her one-year-old daughter Varvara are rebuilding their lives in British territory, a country that has given them refuge.

To The US Sun, Viktoria states: “When I finally got to Britain, I felt so comfortable. I felt safe at last (…) Half of my heart died with my family and half-lives for Varvara, so I will celebrate and make her happy”.

“My daughter was on the road and had no head.”

She and her husband Peter, their 12-year-old daughter Veronika, and little Varvara, who will turn two next month, tried to flee the Russian invasion; however, on March 5, near the village of Yahidne, his car was forced to stop due to large rocks blocking the road. When Peter came out to move them, the Russian soldiers opened fire, mentions The US Sun.

Windows were smashed, and she was showered with shards, leaving her hair covered in blood. He told the BBC that his spouse yelled: ‘Get out of the car’”.

Viktoria recalls: “I had Varvara in my arms, and Veronika was sitting next to me. Veronika opened the door and started to leave, and I followed her. I didn’t see what happened, but when I got out of the car, I realized my daughter was in the road, and she had no head.”

Still, under fire, Viktoria climbed into a ditch at the side of the road, using her body to shield her baby. She continued: “I saw my husband in the car, and he wasn’t moving, and I realized he was dead (…) I couldn’t see the blood because the airbag had gone off, and I could only see his leg. The car was on fire.”

He mentions that he lay there for several minutes as shots rang out around him, then ran for cover in an abandoned car riddled with bullets.

She found the courage to run another 100 meters while shielding her baby and bullets still firing around her to a deserted government building previously used by Ukrainian troops.

There was no running water, heating, or electricity, but they found discarded meat cans and water bottles left behind by the troops.

The next day, in the afternoon, Russian troops found them and told them they would save them, but took them to the basement of a nearby school, where Viktoria and her baby were held hostage in subhuman conditions along with 300 other Ukrainians.

Most of the captives were elderly women and children, and he witnessed the death of 10 people around him. Since people died in the basement, neighbors were occasionally allowed to place the bodies in a common grave nearby.

“They kept me there for 25 days. There was no light, no clean air. People had to sleep standing up. The soldiers smashed our phones. They closed the door on us like animals”, adds the Ukrainian mother.

Yahidne residents told The Associated Press they were forced to stay in the basement day and night, except for the rare times when they were allowed outside to cook on campfires or use the bathroom.

He sought to go for the bodies of his relatives.

Viktoriia narrates that she wanted to rescue the bodies of her relatives and asked for support: “I was helped by a different group of Russian soldiers than the ones who held us. I went to a forest with three of them (…) In Yahidne, there were about 2 thousand soldiers; some killed people, and some helped.

“They took the bodies of my relatives to a forest. There were two crosses. When we were in the forest, the shooting started. They ran (…) One of the Russian soldiers threw me to the ground and protected me”.

Kovalenko’s husband Petro and Veronika were buried at first in the woods, but were later reburied in the Yahidne cemetery, carried there in coffins over a rugged path as friends and family wept and some laid flowers on the grave, and they collected handfuls of earth.

According to the account of The US Sun, around three weeks later, the Russians began their withdrawal from northern Ukraine, and Viktoria was able to flee.

The reburials of their relatives took place after Russian troops left Yahidne in early April as forces withdrew to concentrate their fighting in eastern Ukraine.

“Why did they die, and is my apartment okay?”

Her husband’s parents, who lived in a village three miles away, found her. She later traveled to Lviv, where she was introduced to British businessman Derek Edwards, co-founder of the British charity Nadiya.

She had to get new passports for her and Varvara due to problems with her visa application, so she returned to the apartment where she lived with her family: “I walked around the apartment, and my mind refused to believe that this is now my reality ( …) He was still standing. I thought: ‘Why did my daughter die, and my apartment is fine?’ I felt like a child who wanted a miracle to happen, for time to go back, for someone almighty to give me back my loved ones (…) Sometimes It seems like you can go crazy thinking about it.”

Months later, Derek drove to the Polish-Ukrainian border to look for them. He was part of an eight-vehicle convoy carrying aid to Ukraine and picked it up on the return leg, along with his 35-year-old brother Yuri; his wife Tamara, 28; and their children Sasha, eight, and Olga, three.

“I couldn’t believe there were selfless people like Derek. I was so moved by what people have done for us in Britain and for other Ukrainians as well.”

In the coming weeks, she plans to make a police report of a war crime for what has happened. She said: “My heart is broken. People say that time is a healer, but that is not true. I want justice for them.

“Sometimes I think about whether Putin will use nuclear weapons and start a third world war. I also think this is impossible. When I was here, it seemed unrealistic, but we thought the same way until February 24 that this could not happen in Ukraine, but the war started.

Viktoria arrived in Britain on Saturday and now lives in Kent in a home provided by the Diocese of Canterbury.

No place to live

The US Sun indicates that more than six months have passed since the Homes For Ukraine program was launched, which means that many refugees have reached the end of their sponsorship period.

New figures released this week show that more than 2,000 Ukrainian families with children in Britain and 900 people have registered with local councils as having no place to live.

Derek added: “We also have 200 people still waiting in Ukraine for sponsorship with people in the UK. We desperately need sponsors for them. People have asked me, “Why do you do it?” I couldn’t just sit idly by and do nothing.”

*With information from AP