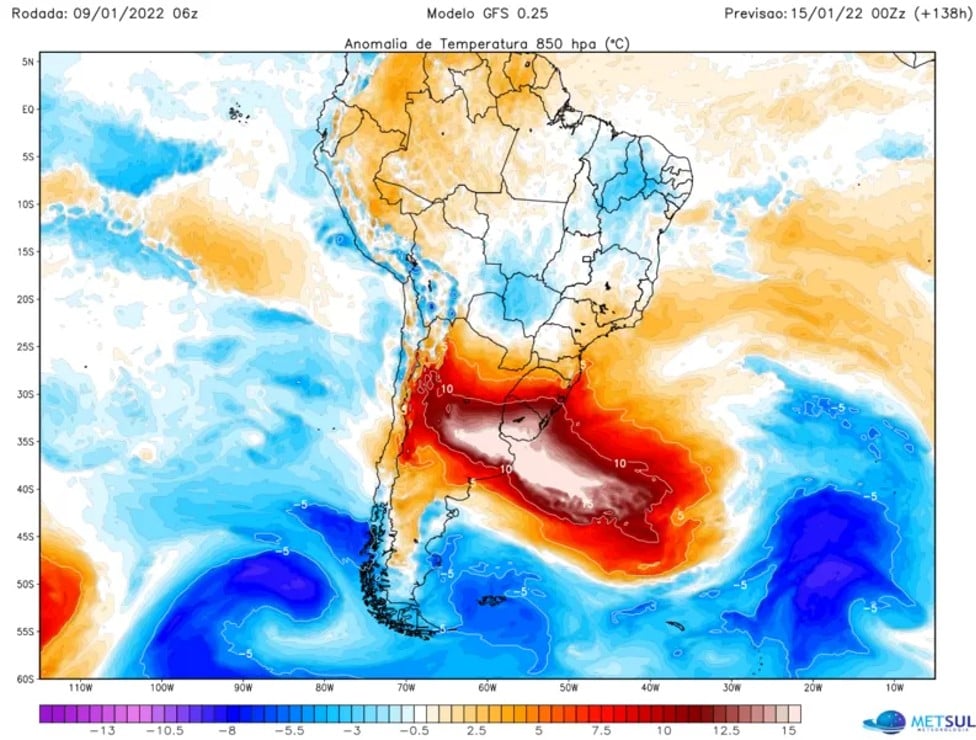 A strong heat wave affects the central region of South America, where temperature records were recorded this week that may be broken in the coming days.

In the Argentine case, “the heat wave is historical because there are two pieces of information that account for it,” Alpio Costa, climatologist and researcher at the Argentine Antarctic Institute, told BBC Mundo from Buenos Aires.

“The first is that in the city of Córdoba on Tuesday a historical record was broken with 42.5 ° C. It is the highest temperature recorded in that city, ”he said.

“But also, in the federal capital, In Buenos Aires city, were recorded on Tuesday 41.1 ° C. Since 1995 the city of Buenos Aires has not reached 40 degrees ”.

One of the hottest places on Earth

Costa pointed out that although this Wednesday the country received “a relief due to a slightly cooler front,” it is expected that on Thursday and Friday the temperature will rebound with even higher records.

Some models provide for Buenos Aires 42 °C on Friday, and the scientist believes that it’s very probable that “for a few hours Argentina become in the hottest place on the planet“.

That data may seem surprising, but Costa put it in context.

“The great deserts of the northern hemisphere, the Sahara, the deserts of the United States, are in winter. There is only the competition with the Australian desert, where now it is summer like in Argentina, but in the afternoon here it is night and at night in the desert the temperature drops a lot ”.

“Therefore, it is not surprising that Argentina can be the hottest corner of the planet for some hours on Thursday and Friday.”

The heat wave in other countries

In Uruguay, the Uruguayan Institute of Meteorology (Inumet) issued a heat wave alert on Tuesday that will remain in force at least until Sunday, January 16.

Meteorologist Nubel Cisneros told the local press that the country could register between Thursday and Friday “the most extreme heat wave in the last 40 years.”

High temperatures, mainly in the north of the country, could exceed Uruguay’s historical record of 44.5 ° C.

In Brazil, the highest temperatures in Rio Grande do Sul must be marked in the west of the state, with maximums between 10ºC and 15ºC above the average for this time of year, according to Julia Braun of BBC News Brazil in Sao Paulo.

The National Meteorology Institute (Inmet) issued a danger alert for 216 municipalities in Rio Grande do Sul due to the heat wave, he added.

How to protect yourself

In the various countries affected by the heat wave, the recommendations to the population are very similar.

⚠️🌡️ We must take care of ourselves against #temperatures high, and for that reason, we recommend:

-Drink a lot of water🥤
-Wear light clothing and light colors👚
-Do not expose yourself to the sun☀️
-Eat light
-Reduce physical activity🤸
-Stay in ventilated spaces🌬️ pic.twitter.com/yDDh54B1Ih

Must be avoid being exposed to the sun between 11:00 and 18:00; wear a hat, light clothing, light footwear, sunglasses and sunscreen of at least factor 30; and drink plenty of fluids, according to recommendations on the site of the Presidency of Uruguay.

It is also advisable to take special care with the most vulnerable people: boys and girls under 6 years of age, people over 65 years of age, those who carry out tasks outdoors and those affected by hypertension, diabetes, obesity, alcoholism or in situations disability.

The director of the National Emergency System (Sinae), of Uruguay, Sergio Rico, specified in the same place that in case of presenting any symptoms related to heat stroke, urgent medical attention should be requested and, while waiting, remain in a Cool and shady place, take a shower or cool off with cold wet cloths on the head, neck, armpits and groin area, in addition to drinking cold liquids.

A power outage on Tuesday affected more than 700,000 users in the Buenos Aires metropolitan area, but Argentine government sources indicated that it was not linked to the heat wave but rather to a house fire.

The BBC Mundo journalist in Argentina, Veronica Smink, said from Buenos Aires that “Argentines, especially the inhabitants of the capital and its surroundings, are used to suffering power cuts during the summer months, due to the problems with the electrical distribution network, which suffers years of deterioration ”.

“The decision of the Alberto Fernández government to freeze gas and electricity rates, to try to stop the inflationary escalation -which exceeds 50% per year- has worsened the problem – many experts say – since it further reduced investment to improve the networks ”, he added.

“Added to this are climatic factors, such as the heat wave that hit the country this week and the prolonged drought in the region, with a historical decline in the Paraná River, which cause increases in electricity demand and further aggravate the problems ”.

Impact on agriculture and forest fires

In Rio Grande do Sul, 159 municipalities are already in an emergency situation due to the drought that began in November.

In southern Argentina, where the rains did not accumulate even 200 millimeters throughout 2021, the drought especially affects the port area of ​​Rosario, where about 80% of the country’s agricultural exports are shipped.

“The agricultural sector, which was already suffering from the lack of rain, must be even more punished by the high temperatures. Excessive heat directly affects the development of the plants and can burn the plantations, ”Olivio Bahia, Inmet meteorologist, told BBC News Brazil.

There is also the risk of forest fires. In Uruguay, the first days of 2022 were already marked by terrifying images of a fire in the west of the country.

Around 37,000 hectares were razed in the Paysandú and Río Negro regions, marking the largest fire in the country’s history.

What is causing the extreme heat?

Éder Maier, a specialist in South American climatology and a member of the Polar and Climate Center of the Federal University of Rio Grande do Sul (Ufrgs), told BBC News Brazil that the current heat wave is the consequence of a hot and dry air mass installed between Argentina and Brazil.

The phenomenon is favored by an area of ​​high atmospheric pressure that acts on Rio Grande do Sul, inhibiting the formation of cloudiness and, consequently, raising temperatures and reducing air humidity.

“The low cloudiness and the dry climate make the environmental system more efficient in converting solar radiation into heat,” said the expert.

The heat wave is due to “a combination of factors“, Matilde Rusticucci, doctor in atmospheric sciences, principal investigator at CONICET (National Council for Scientific and Technical Research) and professor of climate change at the University of Buenos Aires, explained to BBC Mundo.

“Climate change, of course, is one of the factors and what it does is increase the frequency of these heat waves ”.

“Besides that, we are in a very persistent drought phenomenon that has to do, mainly with the fact that we come from a La Niña phenomenon, which in our region gives us droughts, lack of precipitation, so the accumulation of these two factors produces this intense heat wave ”.

The expert pointed out that due to the long period of drought “the soil heats up easier, the higher temperature remains in the entire soil-atmosphere system and that means that temperatures can rise much higher. It is a sum of factors ”.

The blockage of high atmospheric pressure prevents the rains from moving south, which causes them to be held over the northeast and southeast regions of Brazil.

“It works like a seesaw: while the center of Latin America experiences drought and heat, the northeast and southeast of Brazil suffer rains,” he said.

“We have studied the relationship between heat waves and mortality in Buenos Aires throughout the country for a long time, we know that excess mortality occurs when there are very intense heat waves,” Matilde Rusticucci told BBC Mundo.

“That led the Meteorological Service, based on other studies, to issue a heat wave alert.”

For the Argentine expert, it is necessary for countries to prepare for a new reality.

“Those of us who work on climate change have been saying for years that the frequency of heat waves will increase. We have to prepare for another climate, clearly“, he claimed.

“Preparing ourselves means adapting, but on the other hand we know that there are actions that can be taken at the global level to mitigate climate change.

“The mechanisms are known, the technology is available, stopping this climate change is a political decision.”