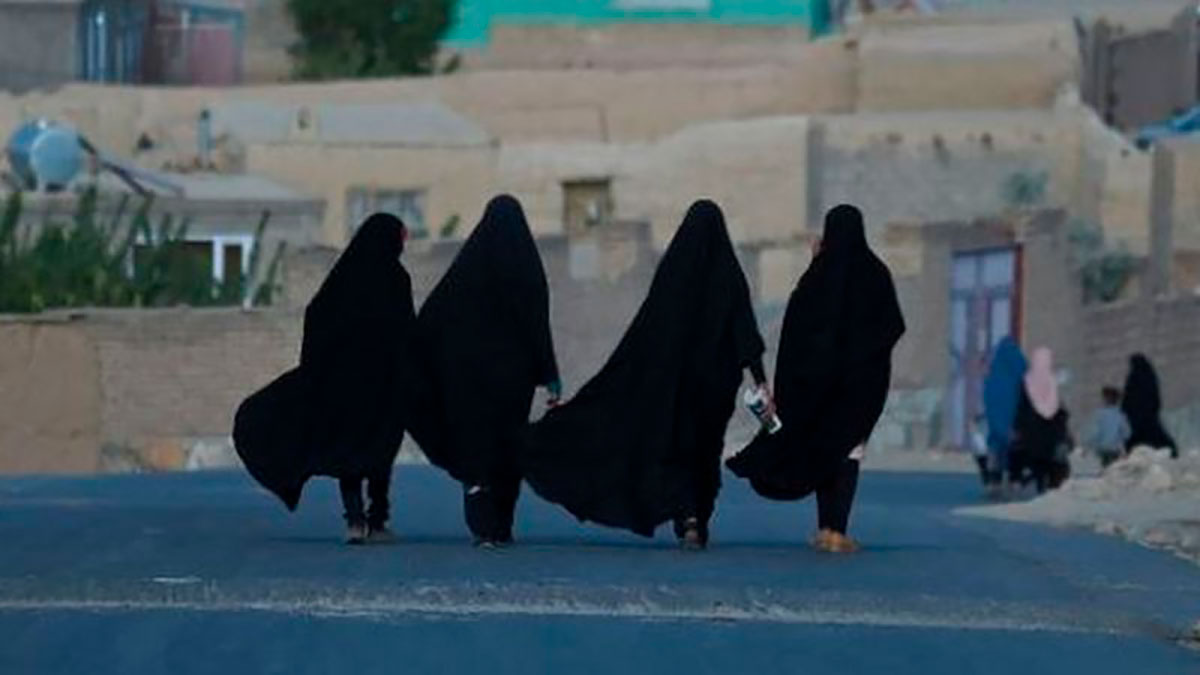 The Taliban’s first period in power, more than 20 years ago, was marked by brutal measures against women such as beheadings, stoning and the imposition of wearing burqas.

After the militants were toppled, Afghan women made significant strides: they held high positions in the administration as ministers, mayors, judges and police officers.

Now they face an uncertain future: five prominent Afghan women told the BBC of their fears about what might happen.

A journalist interviewing a senior official is not news in almost any part of the world.

But given the brutal story of Taliban crackdown on women and girls, many were surprised when one of its leading figures, Mawlawi Abdulhaq Hemad, agreed to answer questions from Tolo News anchor Beheshta Arghand.

Tuesday’s interview broke another tradition: it was the first time a Taliban leader had answered in a television studio.

But despite these apparent concessions, Arghand still has doubts.

“They say, ‘We have no problem with Afghan women. We support their work ‘… but I have my doubts, ”the journalist told the BBC.

Arghand says the environment in his studio in Kabul and in the city has changed.

You no longer speak freely with your guests on controversial topics. Choose your words carefully.

“After a month or two [los talibanes] they will issue laws. I think they won’t let us do what we want. They will make Be difficult [para la prensa] be independent“.

“Now they don’t show any reaction, but we have to be careful. I am very careful“.

In the late 1990s and early 2000s, the group ruled Afghanistan under a strict interpretation of sharia, or Islamic law, and banned television, music, and movies.

In the years after their expulsion, they formed dozens of television networks and more than 170 radio stations FM.

Following the return of the Taliban to power, some television channels removed news anchors from the air and even replaced political programs with debates on Islamic theology.

Since the retaliation did not materialize, many channels returned to their normal programming.

At a recent press conference, the Taliban, who now control a country of more than 39 million people, even said they will allow women work and to study “Within the framework of Islamic law”.

But on August 17, another news anchor, Khadija Amin, took to social media to say that the Taliban had suspended her and other employees of the state television company indefinitely.

‘It takes struggle and sacrifice’

In many places, militants have prevented women from going to work.

Some women have told the BBC that they were not out of fear.

Arghand returned to work because he felt he needed to be in the newsroom at a very critical time.

“I said to myself, go … It’s a very important moment for Afghan women“.

On the way to the office, the Taliban fighters stopped her and asked why she was traveling alone and was not accompanied by a male relative, as dictated by the Sharia.

“We are not in a good position. We know this is not good for the women of Afghanistan. Must fight and sacrifice for generations to come“.

A gynecologist who runs a private clinic and works in a hospital in Kabul told the BBC that her working life has not been affected by political turmoil.

“I came to work three days later. The situation is normal“Said the doctor, who wants to remain anonymous.

She explains that the Taliban have announced that female doctors can continue to work in the hospital and in their private clinics.

The doctor says that in some places the Taliban are actively asking people to return to workBut due to the climate of fear, many have yet to show up.

“Many doctors and midwives did not come to the hospital because they were afraid and not convinced by the announcement of the Taliban.”

In many parts of rural Afghanistan, health services are minimal or non-existent, but the country has taken steps to increase the number of nurses and midwives in order to reduce maternal mortality rates.

As it is, the gynecologist from Kabul is optimistic.

On the way to the hospital, she saw fewer people on the streets and many shops closed, but the Taliban did not stop her to check her clothes.

“It’s not like the last time they were in power. It is a little better compared to the last term ”.

Women are not on the agenda

Of the 250 seats in the Afghan parliament, 27% are reserved for women, and there are currently 69 women parliamentarians.

But the Taliban have no women in their hierarchy and it is not yet clear whether they will form an inclusive government.

“We don’t know anything about his schedule. Our concern is that never talk about women“Says the parliamentarian, Farzhana Kochai.

It affirms that a government without women will not be seen as responsible by the international community and civil society.

“Women we should not be cut off from society. We must continue with our work and remain in the government and in all the places we want ”.

But this deeply uncomfortable with the drastic changes that he has already seen, like fewer women on the streets, although he acknowledges that some women are returning to work and study.

“Not all women are afraid and lock themselves in their homes,” says the legislator.

“But women have changed socially, psychologically and politically. Most of us we are hiding. We can’t even be on social media, we can’t do our work, we can’t leave our homes ”.

“Women are buying burqas in bulk in Kabul. We miss the female presence on television and elsewhere as well.

Even before the Taliban took power, Kochai faced threats from armed groups.

Many women politicians who criticized extremism are now in hiding.

Zarifa Ghafari, who was the youngest mayor in the country when she was appointed at age 26, has even said that she’s waiting for the taliban to kill her.

“I am sitting here waiting for them to come. There is no one to help me or my family. I’m just sitting with them and my husband. And they will come for people like me and they will kill me, “Zarifa told the British newspaper. The Independent.

What the Taliban say about women’s rights and what they are doing in practice are two different things, according to Afghan teacher and human rights activist Pashtana Durrani.

She told the BBC that she is asking for clarity on what women’s rights were acceptable to the Islamist group, which in the past forced women to wear burqas and disapproved of girls aged 10 and over going to school.

Durrani said he had to speak up, despite fearing for his life.

“I have to fight today, so the next generation won’t have to face all this conflict ”.

Durrani says the Taliban’s guidelines on women’s rights are very vague, but that their soldiers have behaved in predictable ways in recent days.

“Herat women have not been able to attend classes at the university, Kandahar girls were asked to go home.”

“[Los talibanes] are seeking legitimacy from different countries, to be accepted as the legitimate government of Afghanistan, but at the same time, what are they doing in practice?

“Or they don’t have the control your comswing, or they really want legitimacy, but are unwilling to make the effort. Those are two different things. “

Durrani also questions what the Taliban mean when they refer to “women’s rights.”

“I will not trust them”

“Are they referring to mobility rights, socialization rights, political rights, their rights of representation or voting rights?”

Germany has said it will stop all aid to Afghanistan if women’s rights are not protected.

Some analysts believe that the Taliban may give women some freedom in an attempt to win over world leaders.

Durrani, who received the Malala Fund Champion of Education award for her work, believes girls will have to turn to the internet for education if the Taliban impose a ban on them going to school.

He is concerned that militants may change school subjects.

“Can girls continue with the general curriculum or will they only have access to Islamic studies that all Afghans do anyway?” She asks.

“I will not trust them.”

‘All I want is freedom’

A young businesswoman living in the Afghan capital, who uses the pseudonym Azada to protect her identity, is also cynical about the promises of the Taliban.

“Azada means someone who is free. All I want now is freedom. That’s why I choose this name, ”he told the BBC.

He fears the new rulers and makes a simple demand:

“Want a new government that has all Afghans. I want the Taliban, the resistance group, the normal group, people of all religions. If this happens, we will have a new country and a new future. Even a better future ”.

But reality is hitting hard. You are already losing your financial freedom because your business is closed And while many are fleeing the country, Azada says that she can’t do it.

Memories of the former Taliban government haunt her: she says they were aggressive towards women then and she doesn’t expect better behavior now.

“They did not change their clothes, hair or beard, How can they change their ideas? I don’t believe in those rumors, ”he explains.

He believes that if the Taliban exclude women and people of different ethnicities, there will be another cycle of violence.

“There will be a war. If we don’t fight, we won’t survive. I will be part of it. I can lose my life. But that’s okay. I have to be brave. I can’t flee Afghanistan. This is the only option ”.