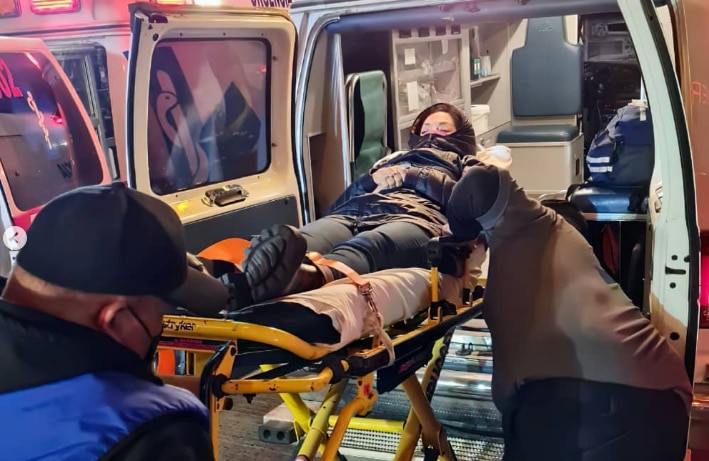 Tatiana He is one of the most loved people on television for several generations; However, this time, “The Queen of Children” did not have a good time, since she had to to be rushed to a hospital because her health was compromised.

According to what was explained by the same child singer, from her Instagram account, she made an air trip from the capital of the country to City Juarez Chihuahua. But she did not expect that the journey would be a complete hardship for her.

The artist said that she had to arrive in the first instance at the International Airport of Mexico City (AICM), but due to her occupations she was rushed and did not have time to eat well.

“Sometimes you have to run and eat the first thing you see … I had a sandwich on the way to the airport in CDMX, the entire 2-hour flight I had diarrhea and vomiting, “he wrote.

Likewise, he narrated that upon reaching his destination he had a severe intestinal infection and in Ciudad Juárez they transferred her to a hospital where they administered serum, antibiotics and other medications to help her with the severe pain she was experiencing.

“We are going to the hotel to rest and a soft diet… at 8 pm is my show here, I had excellent care in the hospital here, they took good care of me. I’m fine now ”he pointed out.

Tatiana recalled that the life of celebrities is not as simple as it can sometimes seem on screen or on stage, since day by day they face multiple difficulties.

“The artist’s life seems glamorous but what happens behind it are things like running a kilometer with suitcases for room changes, eating where you can and what you can due to lack of time, sleeping crooked on the road or planes, but it’s all worth it, it’s part of the show... everything is forgotten on stage when you see them and hear them sing and feel their love !!!! … And as I said in my lecture ‘I CAN’ “, he concluded.

Given this, his followers and some collaborators of the medium did not take long to show their support and wish him to feel better as soon as possible.

A) Yes, Raquel Bigorra, Cynthia Urías, Adrián Uribe, Poncho Denigris and even Mizada Mohamed too They filled the comment box with positive vibes.

It should be remembered that a few days ago, Tatiana gave a private concert at the party of Saúl “Canelo” Álvarez’s daughter.

The little girl arrived at four years of age, and together with her friends, family and of course, her father and mother, she had a big celebration.

Through social networks, Canelo Álvarez‘s wife, Fernanda Gómez, released the images of The luxurious party they held for their little girl’s fourth birthday. They threw the house out the window.

The first images give an account of an impressive ballroom, the location of which was not revealed, but it certainly had an impressive decoration with the theme of Disney‘s “The Little Mermaid” movie.

Then the child singer appeared on the scene by experience in Mexico, Tatiana. “Thank you, Mafer, for inviting me to your birthday, and to your parents Canelo and Fernanda,” the interpreter wrote on her social networks.

During the concert, Canelo’s little daughter she was not just another spectator, as they also invited her to the stage, where she held a microphone to sing your favorite songs and dazzle everyone with your best dance steps. A future artist, possibly.