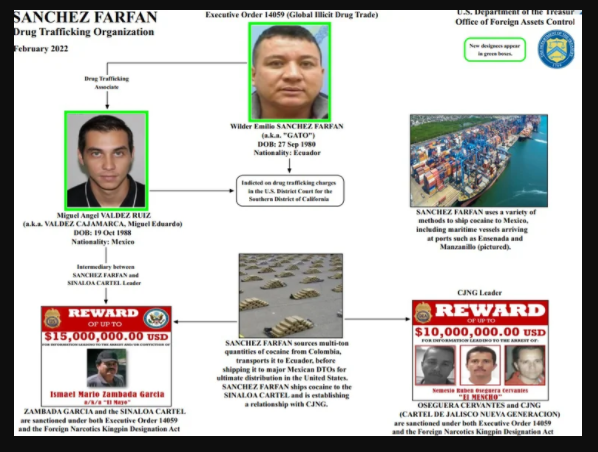 The Treasury Department of the U.S. included in their “blacklist” Miguel Ángel Valdez Ruiz and Wilder Emilio Sánchez Farfán, two of the main operators of the Sinaloa Cartel accused of trafficking cocaine to the United States.

According to the US Embassy in Mexico, the blockade of goods from both drug traffickers was the result of collaboration between the Office of Foreign Assets Control (OFAC) and the Drug Enforcement Administration (DEA).

They are also accused of holding meetings with members of the Jalisco Nueva Generación Cartel (CJNG) in order to establish a working relationship to import large quantities of tons of cocaine into Mexico from Ecuador.

Who are these operators of the Sinaloa Cartel?

According to inquiries, Miguel Angel Valdez Ruiz is a Mexican drug trafficker who works from Culiacan, Sinaloa, importing cocaine from Ecuador supplied by Sánchez Farfán, with whom he works directly and who serves as an intermediary with Ismael Zambada García, current leader of the Sinaloa Cartel.

“Valdez Ruiz has direct contact with Zambada García and is responsible for helping him with the entry of the cocaine supplied by Sánchez Farfán to Mexico from Ecuador, using his private planes fleet.

He also coordinates with partners in Mexicali, Ensenada, and Tijuana to transport cocaine from Sinaloa to the southern border of California and finally into the interior of the United States,” the American authorities said.

For his part, Wilder Emilio Sánchez Farfán, of Ecuadorian nationality, is considered “one of the most important drug traffickers in the world today” noted for obtaining and transporting large quantities of cocaine from Colombia to Ecuador.

“Sánchez Farfán is an important source that supplies cocaine for the Sinaloa Cartel. He uses partners in Mexico to facilitate multi-ton shipments of cocaine to members of the Sinaloa Cartel operating in Culiacán, Manzanillo, and Ensenada, within Mexico,” the Treasury Department said.

In January 2019, a drug trafficking charge was presented before the Federal Circuit Court of Southern California (SDCA) with charges against Sánchez Farfán and Valdez Ruiz, who are currently fugitives and face charges in the USA since 2019.

When was the Sinaloa Cartel founded?

It was founded in 1989. The Sinaloa Cartel, or also known as the Pacific Cartel, is a Mexican criminal organization dedicated to drug trafficking.

However, since the 1960s, various cartels that control the market of illegal substances have been formed, expanded and disappeared in Mexico, which have maintained an open dispute to control the territory.