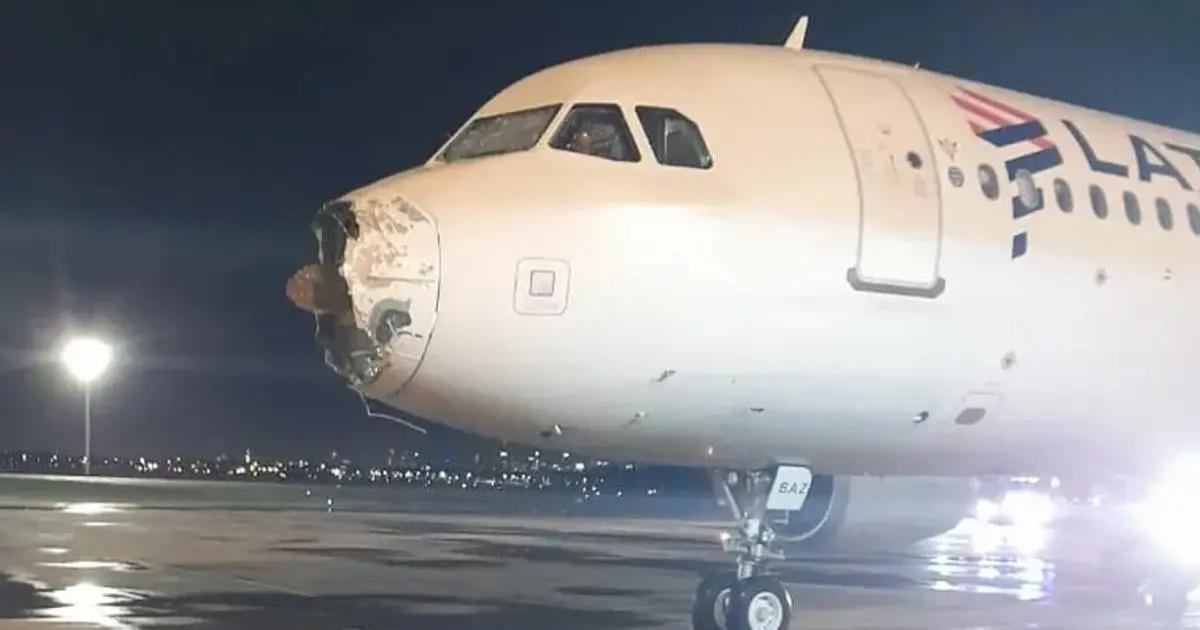 A chaotic situation was experienced in the air this Wednesday night in the middle of a Latam flight that connected Santiago de Chile with Asunción, in Paraguay, when the aircraft went through a storm that caused strong turbulence and scared the passengers. Even the state in which he landed on the runway of the Silvio Pettirossi Airport, in the Luque neighborhood of the Paraguayan capital, after declaring an emergency was shocking.

This plane descended with one engine less, the windshield broken, and the front part destroyed, according to what the ABC newspaper of Paraguay confirms and what was also evidenced in photos of the aircraft on the runway when it managed to touch down after the complex flight.

According to that medium, it carried 48 passengers who had boarded in Santiago de Chile. The stipulated thing was that they landed in Asunción at 5:25 p.m. from Paraguay. Still, the flight was first diverted to the Foz do Iguazú airport, Brazil, due to the weather. There was a delay of a few hours, and the itinerary was resumed. It was in that section between Foz do Iguazú to Asunción that the turbulence recorded on the passengers’ cell phones occurred.

In these recordings, it is seen how the plane moves abruptly and makes travelers jump out of their seats while screams and thunder are heard. “My God”, people shout, and things are seen lying in the corridor. As the minute’s tick by, the aircraft also moves sideways. “Please! Holy God,” says the man filming with his cell phone while the rest of the people appear determinedly clinging to the seats.

Another video of the same journey filmed by a passenger against the window shows through it the storm that was going through the plane at the time of the turbulence, with lightning that illuminates the interior. At one point, the lights in the corridor are even turned off. Cries of despair can also be heard on that recording.

Given the seriousness of the situation, ABC Paraguay reported that the National Directorate of Civil Aeronautics of that country began an investigation to analyze the emergency declaration made by the crew. Several doubts arose as to why they decided to resume the flight from Brazil to Paraguay with the current bad weather conditions.