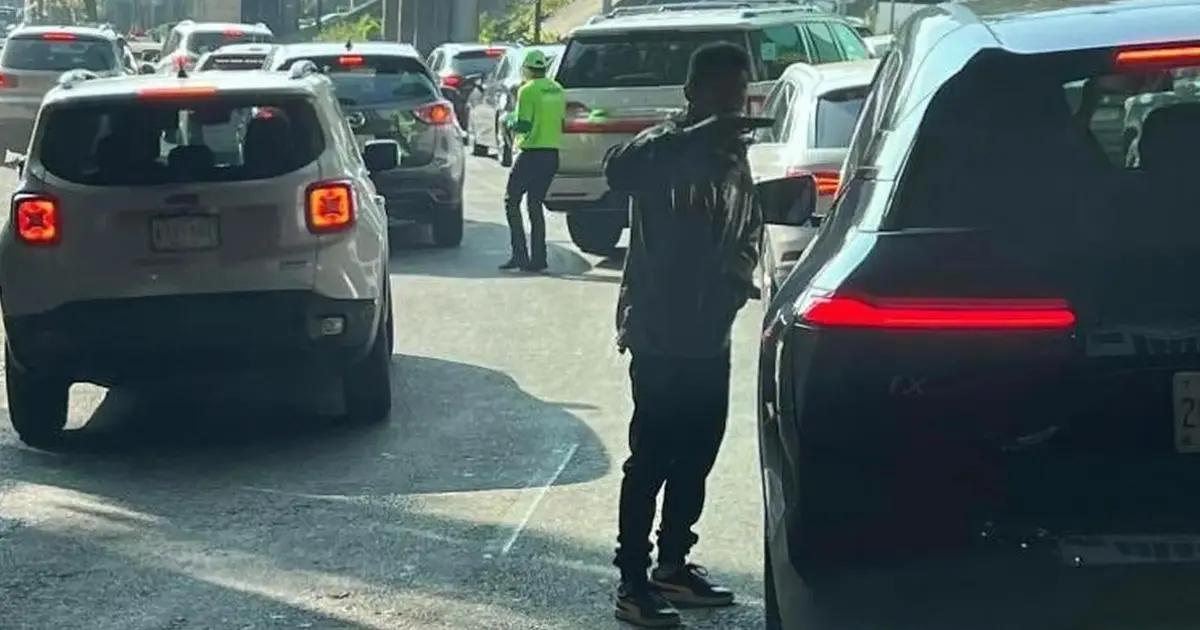 Recently a robbery with a firearm was captured on video in the west of Mexico City. Despite police operations, the assailants seem to be ahead. However, users of social networks have made multiple complaints, and the Government of the CDMX is set in motion to resolve them.

At noon on Friday, November 4, 2022, a subject was recorded using a gun and intimidating a driver of a red Mercedes Benz to rob him of his belongings.

The events took place in the perimeter of the Bosques de Tamarindos neighborhood in the Cuajimalpa district. According to initial reports, the incident occurred on Friday morning on Paseo de Los Tamarindos Avenue, precisely at the exit of a tunnel leading to Santa Fe.

The offender took advantage of the slow progress of the cars due to the rush hour to approach the window of the sedan driver. After repeatedly hitting the window with the barrel of the gun, the driver lowered the window and handed over the belongings requested by the assailant.

A motorist trapped in traffic witnessed the events and managed to capture the action with the help of a cell phone. Additionally, he honked the horn of his car several times in an attempt to scare off the armed subject. However, the efforts were in vain since the thief did not even turn to look at him.

Internet users denounced the robbery through the social network Twitter, hours after the report of another one carried out on Gran Canal Avenue located in Gustavo A. Madero, where a couple of subjects assaulted a driver to rob him of 10 thousand pesos that he had exchanged at the International Airport of Mexico City (AICM).

The mayor of Cuajimalpa, Adrián Ruvalcaba, confirmed that the crime occurred between the Tamarindos bridge and the Mexico-Toluca highway in the municipality of Álvaro Obregón, which means that the complaint corresponds to that territory. However, he mentioned that he would reinforce security in his area.

“Good morning Fernando, the issue has already been reported to the authorities of Seguridad Ciudadana. We inform you that the point you indicate is Roberto Medellín and belongs to the Mayor’s Office of Álvaro Obregón. Greetings and thank you,” read the response from the official account of Cuajimalpa.

Users questioned that in case of witnessing an assault with a firearm to what institution should be reported, so the Contact Unit of the Secretary of the Secretariat of Citizen Security (SSC) CDMX responded: “In coordination with the Sector EL YAQUI reinforces patrolling and surveillance circuits to inhibit the commission of criminal acts.”

Thanks to the complaints on networks regarding the assaults in Santa Fe and Bosques de las Lomas, the SSC CDMX deployed an operation in which several witness testimonies were collected. With the support of C5 and private cameras, in the afternoon of the same day, they managed to arrest the person responsible for the assault in the tunnel in the Cuajimalpa alcaldía.

However, the inhabitants of the city did not remain calm and questioned the efficiency of the police and asked: “If only with complaints on the networks they get to work, then what is the use of their area of “investigation and police intelligence”? it has already been seen that they do not do their job”.