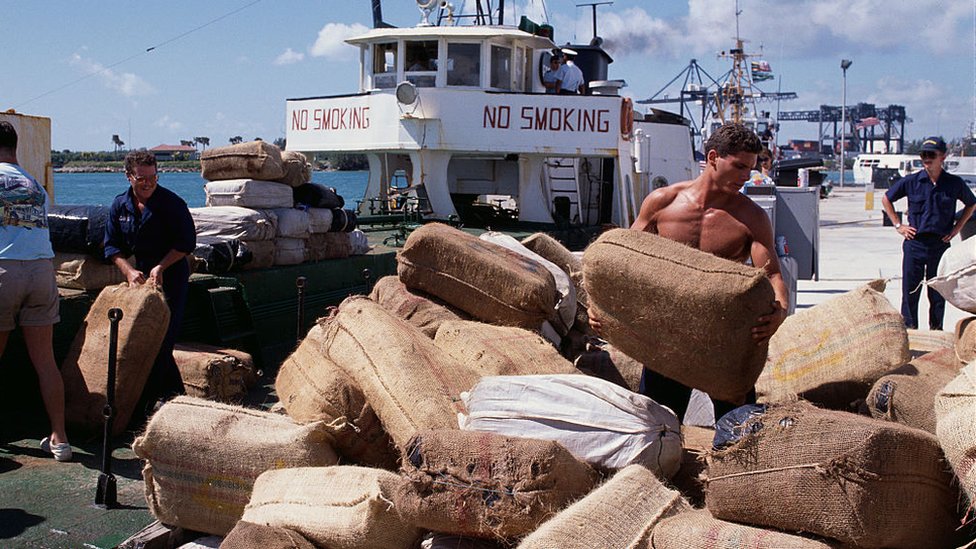 That was the question on the cover of the American magazine TIME in its issue of November 23, 1981, 40 years ago.

The paradise that the magazine referred to was South Florida and described it as “lost” because of the bloody situation in and around Miami.

621 people died violently that year, highest homicide rate in city history, and the media reported on them explicitly.

A woman shot to death on a Miami street, a man’s jugular vein severed with a knife, a body rolled on a highway after being pushed from a moving car, a 4-year-old boy shot while walking holding the hand of his mother.

The dead were so many that the city forensic office had to rent (for the second year in a row) a freezer truck to store the bodies.

“The murder rate was overwhelming and the police department could not keep up with the cleanup of homicides,” writer and journalist Roben Farzad, author of the book, tells BBC Mundo. Hotel Scarface: Where Cocaine Cowboys Partied and Plotted to Control Miami (“Hotel Scarface: where the cocaine jockeys partied and conspired to control Miami”, in its literal translation into Spanish).

“A police officer compared it to pushing sand against the tide,” adds the author, explaining that the degradation of violence derived from drug trafficking in Miami, handled mainly by Colombians, intimidated the witnesses and families of the victims.

“Nobody wanted to come forward to give their testimony and all these unidentified bodies were piling up and piling up,” he recalls.

The freezer cost the city $ 800 each month. It had been rented the previous year, in 1980, to house the bodies corresponding to the already terrifying 573 homicides.

It was used until 1988 because the wave of violence then nicknamed “US murder capital“It did not last only a summer, nor a few months, but it was part of a cycle that began to take shape in 1979, detonated in 1980 and had its peak in 1981.

A shootout in broad daylight

“Many things happened before [de 1981]. You find the original eruption in the summer of 1979, with the shooting at the Dadeland shopping center ”, explains Farzad,

That shooting occurred on July 11, 1979, in broad daylight, between alleged Colombian traffickers, nicknamed the “cocaine riders,” a term coined by a police officer who was at the scene of the crime that day, according to relates a newspaper article Miami herald.

“That was the ultimate warning, to make such a blatant shooting at the largest mall in South Florida, between a [pizzería] Cazzoli’s and a crowded liquor store, ”adds Farzad, who has studied Miami’s history in depth.

But the violence in South Florida was not only escalated by the illicit drug trade.

Several specific events buttressed the frustrations and tensions among the various demographic groups, adding gunpowder to the time bomb.

In December 1979, the insurance salesman and former black marine Arthur McDuffie, was beaten up by a dozen white cops until he was in a coma, after he crossed a street on his motorcycle with a red light.

McDuffie passed away within days.

Although the investigation led to several arrests, five months later, in May 1980, some of the agents, allegedly responsible for the crime, they were acquitted by an all white jury, even though the evidence showed that they had covered up the crime.

This frustration led to the Miami race riots in which at least 18 people died, more than 600 were arrested and there were losses of more than $ 100 million in destroyed property, mainly in the mostly Afro-American neighborhoods Liberty City and Overtown.

“People just pulled other people out of cars and beat them,” Farzad says.

For his part, Lisandro Pérez, professor of Latin American and Latinx Studies at John Jay College, CUNY University, explains that factors such as the emigration of the black middle class from Miami had an impact on the possibilities that the community could express their frustrations legitimately in South Florida.

“Miami’s African-American community had not stood out like other cities in the US for riots like the ones that happened in the 1960s in the North. [del país]”, He says.

“Characters like Martin Luther King, for example, who were from those middle classes where African-American leadership usually comes from, in Miami they have been absent,” he says.

Indeed, until the 1960s, Overtown, a neighborhood in North Miami, was a prosperous African-American community with a very active cultural life, but an urban renewal plan that involved the construction of several freeways that literally crossed over the neighborhood, devastated the area and disrupted the viability of the community.

Liberty City became a poorer area, abandoned by the state and with continued structural segregation.

“To all this is added the fact that the first boats from the Mariel arrived in the same month,” says Pérez, referring to the massive exodus from the port of El Mariel in Cuba, which led to the arrival in South Florida of about 125,000 Cubans in a six-month period, between April and October 1980.

After thousands of Cubans occupied the Peruvian embassy in Havana, in April 1980, Fidel Castro allowed whoever wanted to leave the island. Thousands of boats set sail from Key West, Florida, 170 km from Havana and returned to the US laden with the new migrants.

“El Mariel represented a tremendous threat especially to the black community, but also to the white, Anglo-Saxon community of Miami,” asserts Pérez, who is the executive producer of the documentary “Beyond the Sea” about the Mariel exodus.

“In the past, Cuban emigration had been an orderly migration,” says Pérez.

“In many cases, the Cubans were located with a program, they were relocated to other parts of the United States, and these migrations did not represent a great threat.

“Now when Mariel begins, one sees another face of Cuban migration. A Cuban migration that the US was not willing to accept. It was messy, in which it did not seem that the US had control over its borders, “adds the Cuban professor.

“They were also sectors of Cuban society that had not been seen before in that number in the United States, especially the black, mulatto and lower socioeconomic population in Cuba,” Perez describes.

About 2,000 Cubans who arrived in the Mariel were designateors by the US immigration authority as “not admissible“According to Pérez, who clarifies that it is usually speculated about a greater and imprecise number of Cubans who arrived with some type of criminal record.

“In an environment heated by drug trafficking, due to the situation of the Afro-American population, the arrival of the Cubans from Mariel was to pour gasoline on the fire,” says Pérez.

Cubans already established in Florida sought to move away from that migration and tried to maintain an image of successful exile migration, “which contributed to life in the United States,” according to the CUNY professor.

For its part, the resentment of the white American community in Miami-Dade County materialized in its initiative, and later triumph, of a referendum in which the bilingual status that the county had was annulled.

The cocaine business and all its derivatives was what fueled the violence in the city.

Figures from the US Drug Enforcement Administration (DEA), published by The New York Times in 1981, they indicate that in 1980 federal agents seized 2,217 kilograms of cocaine in Florida, 384,525 kg of marijuana and 15 million doses of Quaaludes.

$ 42 million in cash, cars, boats, planes and other items were also seized.

For its part, the magazine TIME, In the article mentioned at the beginning of this note, he argued: “Drug money has corrupted the banking, real estate, law enforcement and even the fishing industry, whose practitioners are abandoning the search for snapper and grouper for the transport of packages of marijuana […] from freighters at sea to the mainland. Approximately a third of homicides in the region are drug-related ”.

According to the investigation by Roben Farzad, the Colombians were the ones who had the cocaine business, but they used the Cubans to move the drug and distribute it throughout the Caribbean and the Florida coast. Also as local distributors.

“The Colombians were the least conspicuous, they were the wholesalers. They left their house at a normal time in the morning, lived as a family and went to church. But they needed the Cubans overwhelmingly, ”he explains.

“A lots of [cubanos] they were trained by the CIA in the Bay of Pigs, they knew the coast of Florida, they knew how to do maritime evasion ”.

“At that time, Pablo Escobar was spending $ 1,000 on rubber for bundles of bills,” says Farzad. “If you have that much cash, the whole world is for sale.”

“When you talk about $ 50,000 a kilo or the surplus of $ 5 billion in cash that the Miami branch of the Federal Reserve had for 1980 and you look at how much money a single police officer could make, $ 21,000 a year, you understand that he could be paid with a kilo and double their salary ”, asserts Farzad.

“Miami was really ungovernable, it was completely illegal. It looked like the Wild West, but much more murderous, with much more money, with everyone for sale and where the institutions did not work ”.

Now you can receive notifications from BBC News Mundo. Download the new version of our app and activate it so you don’t miss out on our best content.