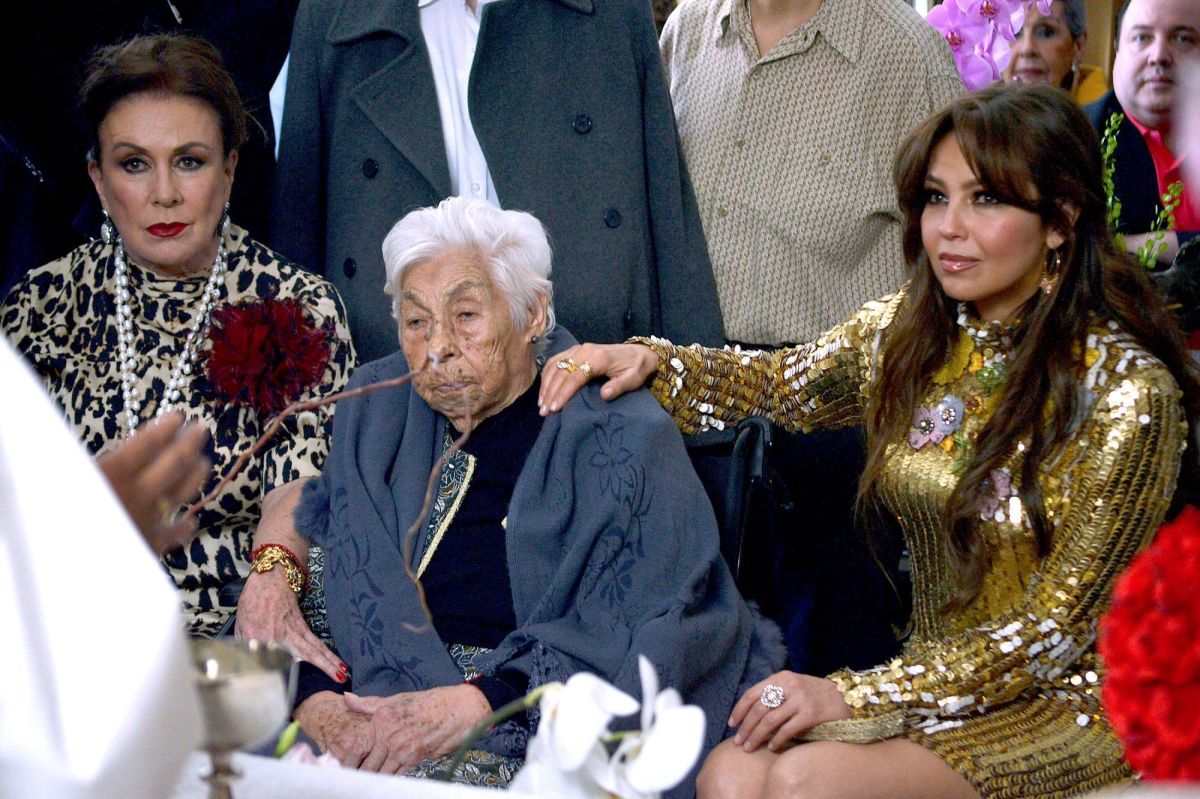 After many battles with her health, Thalia’s grandmother, Eva Mange, died last Friday at the age of 104. The funeral was held over the weekend. While Laura Zapata paid a beautiful tribute to the lady and social networks praised her, her sister suffered just the opposite. Internet users destroyed the interpreter of “Marimar” for not making an appearance.

“She only cares about the money”, “So much so that she cries for her grandmother and she was not even able to come”, “In the end, Laura Zapata showed to have more heart”, “As if she did not have wool to catch her private plane”, “Her schedule of videos for the internet does not allow it…”, were some of the strong comments and criticism received by the Mexican actress Thalia for not attending the funeral of her grandmother. However, for Laura Zapata, it was the opposite.

The also-actress-singer was praised for the love with which she said goodbye to her grandmother and all that she fought for her health until the last moments. Though, Laura Zapata had not made any statement about her sister until the closing of this note. “Only you deserved to be there because you fought for your grandmother’s health”, “What better way to say goodbye than flying butterflies“, and “Poor lady until the end alone with the health of her grandmother”, were some of the comments that praised Laura Zapata.

Last Friday, Thalia and Laura Zapata’s grandmother passed away at the age of 104 from natural causes. Her death would not have been, in principle, a direct consequence of the mistreatment and neglect she suffered two years ago in the nursing home where she lived. This Sunday, Mrs. Mange’s funeral took place in Mexico City before proceeding to the cremation of her mortal remains to fulfill her last wish. The old woman had made it clear that she did not want to be buried due to her fear of being alone in the dark. The great absentee was Thalia, who said goodbye to her grandmother on Instagram, applauding the strength she showed until the last of her days, and described her as “an immovable titan”.

As we have already said, Laura Zapata did not want to give any explanation on the reasons why his stepsister could not attend the religious service, limiting herself to responding with a terse “ask her” when the reporters approached her at the exit of the cemetery to give him condolences. From her words and the sharp tone she used, it seems that a distance between the two women has once again occurred for reasons that only they know.

Caring for her grandmother pitted Laura against Thalía, whom the former reproached for not coming to visit the old woman more often and for not being interested in her. However, in 2021 they put aside their differences after discovering the old woman in inhuman conditions in the residence where she had been admitted, believing that she would receive the best possible care from her.

After the funeral, in which Laura Zapata was accompanied at all times by her son and several close friends, she organized a tribute to Mrs. Eva Mange releasing 104 butterflies in honor of each year of her life: “Cool grandmother, turn high, my holy queen. God bless you, thank you for everything, ”she said as a farewell.