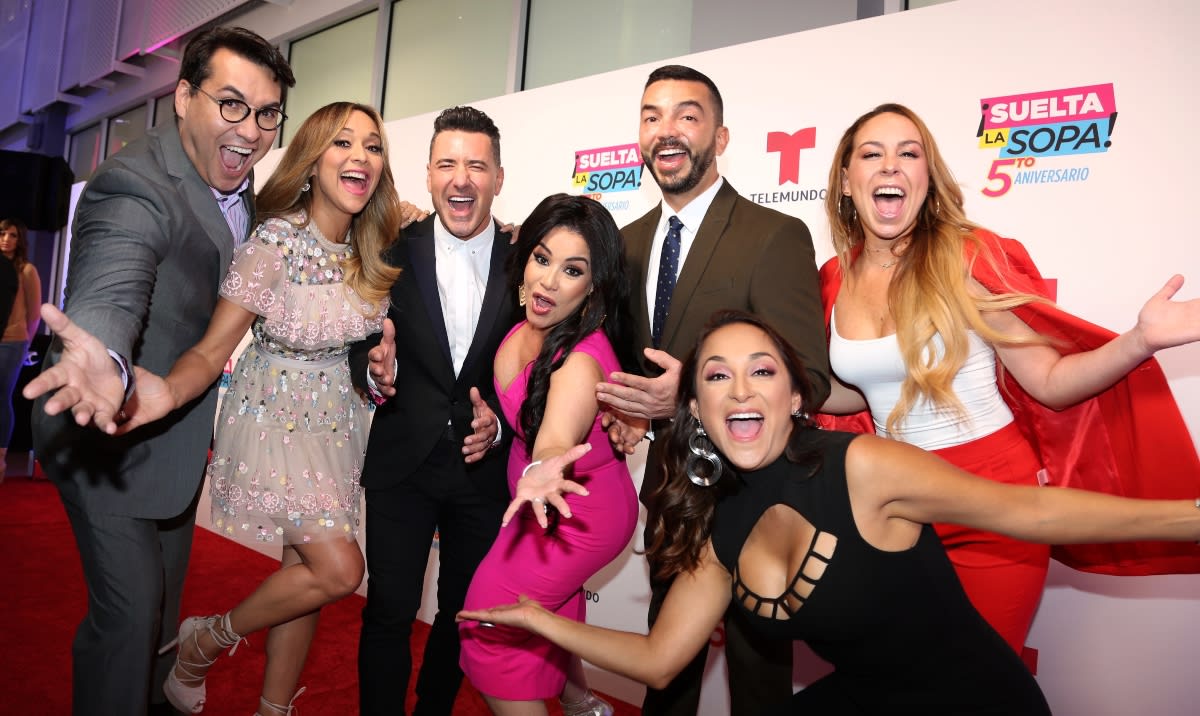 They ensure that the drivers of Tell me what you know They are “desperate” looking for work, after they were recently informed that the show business program would come to an end in December of this year.

During a broadcast of Gossip No Like, Argentine journalist Javier Ceriani assured that the presenters of the Telemundo show are calling all the television and radio networks inside and outside the country in search of employment. “They are desperate,” he said.

They ensure that Suelta la Sopa drivers are looking for work

Ceriani commented during his entertainment program that the hosts of Suelta la Sopa “are calling CNN, calling Univision, calling La Mega, Puerto Rico, everywhere. They are desperate because the Titanic is sinking. “

“As a song by José Alfredo Jiménez says. How beautiful revenge is when God grants it to you ”, added his partner Elisa Berastain, referring to the situation that arose a year ago with the dismissal of Carolina Sandoval.

They were already announcing it

For a few days there was a rumor that the Suelta la Sopa program would be canceled. Even Ceriani himself had commented on a crucial meeting that would take place on the television plant and in which they would finally decide to remove the show from the channel’s programming.

Now, the Argentine assures that the presenters of Suelta la Sopa, which will be on the air until December, are knocking on doors in other media and even with other colleagues in search of a new work project before their current space runs out.

Almost a year ago, great controversy broke out when Suelta la Sopa decided to remove Carolina Sandoval from her team of presenters; but Ceriani undertook the task of recovering the statements that Jorge Bernal offered at that time. According to Bernal, the departure of his partner would not affect the rating of the program.

This was not the only striking statement from the presenter. Gossip No Like highlighted a recent one in which Bernal asks in the middle of the program that they consider him and his colleagues as participants in the reality show The House of the Famous. What may have been a humorous comment, apparently hinted at the need to get a job quickly.

Carolina sends a message to her former colleagues

Ceriani and Beristain interviewed Carolina Sandoval, who was walking through the White House just as they announced the news of the cancellation of Suelta la Sopa. “La Venenosa” unloaded his ex-teammates and warned them that if they do well, they will do well, but if not, “get ready because a heavy rain shower is going to fall on them.”

Finally, he said “from empathy, the only thing that I am going to say to all people is that they never forget that the most important thing we have is family, that when everyone forgets it is the only thing that will always be there ”. Will Aylin Mujica, Juan Manuel Cortés, Lucho Borrego and Jorge Bernal get a job? SEE FULL VIDEO HERE.

To put an end to the rumors, journalist Mandy Fridmann confirmed for La Opinion that after 8 years on the air the show program Suelta La Sopa will be canceled and that it will come to an end, at least on Telemundo in the coming months.

According to information from the media, the entire team that works at Suelta la Sopa, from employees to members of the production company High Hill Entertainment, owner of the program that co-produces the show with Telemundo, were summoned to a meeting at the end of the broadcast. Although the nature of this board was unknown, many already feared the worst for the program.

8 years on the air and comes to an end

During this meeting it was reported that the program would come to an end, at least with Telemundo, because the television channel has decided not to renew the contract after 8 years on the air. According to La Opinion, the contract that this program has with the channel will end in December, so it still has two months left on the air.

The program has not publicly disclosed the news, but Telemundo confirmed to journalist Mandy Fridmann in a statement that “by the end of this year, Suelta la Sopa will be reaching the end of its cycle on Telemundo.”

They thank the program team

Telemundo said that the program played an important role within the network: “During its eight years on the channel, Suelta la Sopa filled an important role in our afternoon programming, offering our audience the latest in entertainment and celebrity news.” .

At the end and without giving further explanations as to why this decision was made, Telemundo thanked the entire team for their hard work: “We thank all the talent and the production team for their dedication and commitment to making Suelta la Sopa a representative program of afternoons on Telemundo ”, he concluded. They ensure that Suelta la Sopa drivers are looking for work.