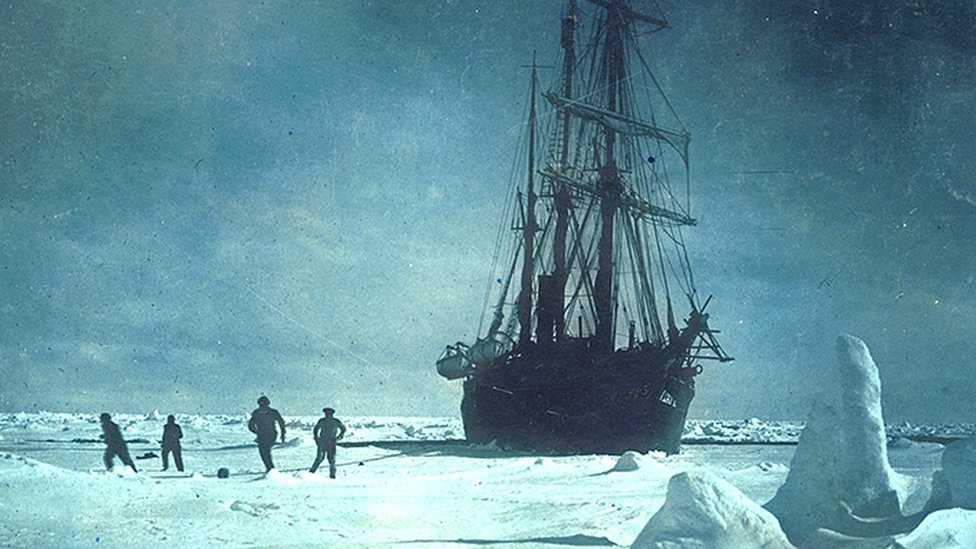 Scientists have found and filmed one of the largest shipwrecks ever discovered, 107 years after it sank.

The Endurance, the lost ship of the antarctic explorer Ernst Shackleton, FIt was found over the weekend at the bottom of the Weddell Sea, a large portion of the South Atlantic Ocean off Antarctica.

The ship was crushed by sea ice and sank. in 1915forcing Shackleton and his men to make a stunning escape on foot and in small boats.

Video of the wreckage shows that the Endurance is in excellent condition.

Despite the fact that it has been sunk more than 3,000 meters deep for more than a century, it looks practically the same as the day it sank in November 1915.

Her timbers, though broken, are still very close together, and the name, Endurance, is clearly visible on her stern.

“Without any exaggeration, this is by far the highest quality wooden shipwreck I have ever seen,” said marine archaeologist Mensun Bound, who is part of the expedition responsible for the discovery and has now fulfilled a dream ambition in his life. almost 50 year career.

“It stands tall on the seabed, intact and in a brilliant state of conservation, he told the BBC.

The project to find the missing ship was carried out by the Falklands/Malvinas Maritime Heritage Trust (FMHT), using a South African icebreaker, Agulhas II, equipped with remotely operated submersibles.

“The discovery of the wreck is an incredible achievement”, he added.

“We have successfully completed the search for the world’s most difficult shipwreck, battling ever-changing sea ice, blizzards and temperatures dipping to -18°C. We achieved what many people said was impossible.”

Where was the ship found?

The Endurance was sighted in the Weddell Sea at a depth of 3,008 meters.

For more than 2 weeks, the subs combed a predefined search area, investigating various interesting targets, before finally discovering the wreck site on Saturday, the centenary of Shackleton’s funeral.

The days since the discovery have been spent making a detailed photographic record of the surrounding timbers and debris.

The wreck itself is a designated monument under the international Antarctic Treaty and must not be disturbed in any way. Therefore, no physical artifacts have been brought to the surface.

What could the submarines see?

The ship looks very similar to when it was last photographed by Shackleton’s cameraman Frank Hurley in 1915.

The masts are down, the rigging is tangled, but the hull is pretty cohesive. Some damage is evident to the bow, presumably where the descending ship hit the sea floor. Anchors are present. the submarines they even saw some boots and crockery.

“You can even see the name of the ship – ENDURANCE – [resistencia, en español] arched at the stern, under the taffrail (a handrail near the stern). And below, very bold, is Polaris, the five-pointed star, to which the ship owes its original name”, said Mensun Bound.

“You have to be made of stone not to be moved when you see that star and the name on it,” he said.

“You can see a porthole, which is Shackleton’s cabin. And at that moment, you feel the breath of that great man on the back of your neck”.

What marine life is on the ship?

Interestingly, the wreck has been colonized by a large number of organisms, but not the kind that would consume them.

“It would seem that there little wood deteriorationinferring that wood-chewing animals found in other areas of our ocean are not, perhaps surprisingly, in the forest-free Antarctic region,” said deep-sea polar biologist Michelle Taylor of the University of Essex ( United Kingdom).

“The Endurance, which looks like a ghost ship, is dotted with an impressive diversity of deep sea marine lifeSea squirts, anemones, sponges of various shapes, starfish and crinoids (related to sea urchins and starfish) all feed in the cool deep waters of the Weddell Sea.”

Why was this ship so precious?

The first is the story of Shackleton’s Imperial Transantarctic Expedition. He set out to do the first land crossing of Antarcticabut had to abandon the search when the expedition ship, the Endurance, became trapped and then holed by sea ice.

Since then, it was all a matter of survival. Shackleton somehow managed to get his men to safety; in escaping from him, the Anglo-Irish explorer took a small lifeboat across fierce seas to seek help.

The other reason was the very challenge of finding the ship.

The Weddell Sea is almost permanently covered by thick sea ice, the same ice that broke through the hull of the Endurance.

Approaching the supposed location of the sinking is quite difficult, regardless of whether a search can be conducted. But here too lies part of the success of the FMHT project.

Last month saw the lowest extent of Antarctic sea ice ever recorded during the satellite era, dating back to the 1970s. The conditions They were unexpectedly favorable.

The Agulhas concluded the survey of the wreck and left the search site on Tuesday. The icebreaker is heading for its home port of Cape Town.

But the intention is to call the British Overseas Territory of South Georgia, where Shackleton is buried.

“We’ll pay our respects to the ‘Boss,’” Shears said, using the nickname the Endurance crew had for their leader.

All the images of the shipwrecks are courtesy of the FMHT and National Geographic.