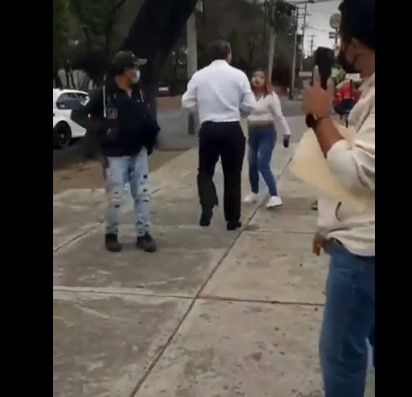 The actor claims a woman “give me back my cell phone” Photo: Screenshot

In the last few minutes, a video has become popular on social networks where you can see Alfredo Adame in an unfortunate situation.

In the clips that emerged from TikTok and Twitter you can see the controversial actor in a street fight against a woman to whom he asks to return his cell phone, and against a man, who descends from a gray truck.

Without knowing more details at the moment, you can see the also aspiring politician struggling and, with his shirt open, in what is presumed to be an avenue in Mexico City where the actor ends up on the ground on the sidewalk.

The situation allegedly got out of control after a road incident on the capital city’s South outskirts, although the details of the fight are still unknown.

In another edition of the video posted on the social network of short clips, you can see another shot of the incident, this time captured from a car, and you can see how the woman descends who throws herself at the 68-year-old actor while he defends himself and lunges at her.

The video was edited with the scandalous statements that Adame has made in the past regarding violence against women, whom he has called ‘bitches’. “I’ll give you a million dollars if you bring me here a woman I’ve hit and the next one I’m going to burst her snout,” he can be heard.