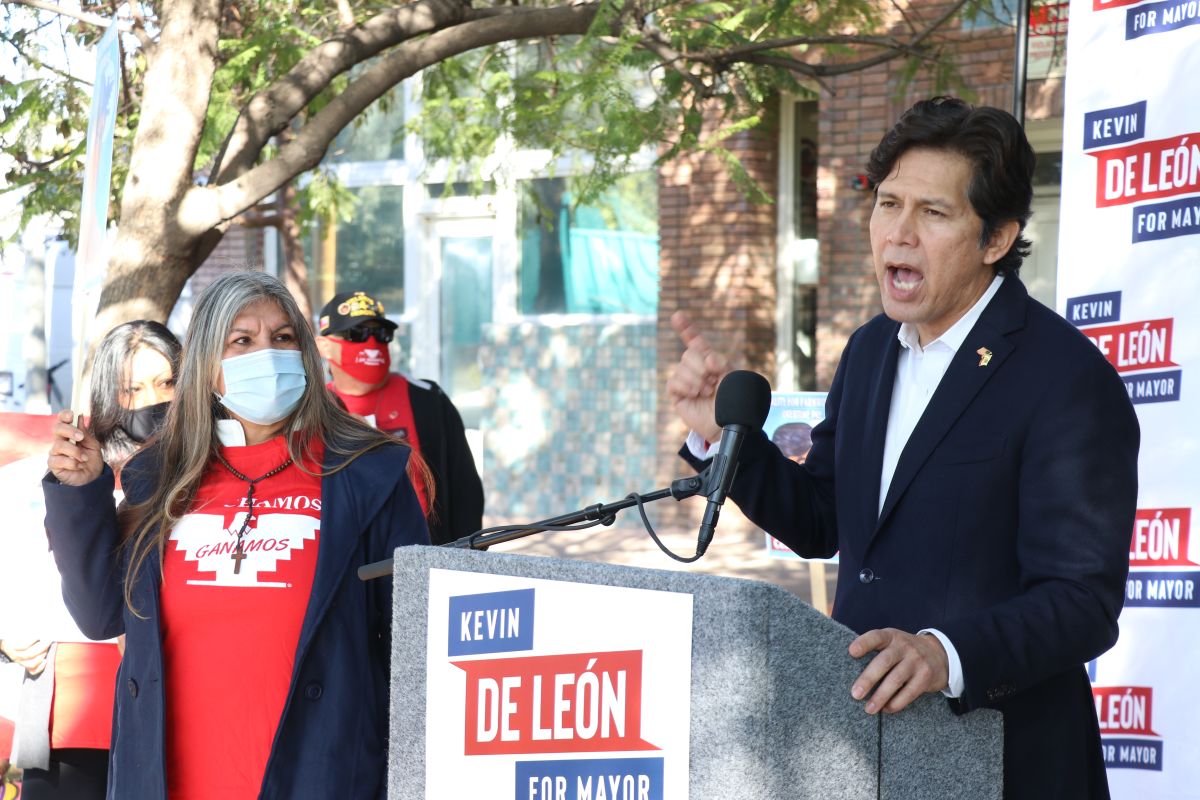 Considering him a homophobic person, sexual harasser, womanizer and unfaithful, several members of the Boyle Heights Neighborhood Council expressed their disagreement to the proposal of Los Angeles Councilman Kevin de León to change the name of Bailey Street and put the name of Vicente Fernández, considered the king of ranchera music.

“We oppose because Councilman De León did not consult his constituents and did not bring the issue to the Neighborhood Council, but also because it is well documented by reliable media outlets that Vicente Fernández openly rejected a liver transplant because it could be from a homosexual or addicted person.”, said David Silvas, vice president of the Boyle Heights Neighborhood Council and president of the Planning and Land Use Committee where De León’s proposal was initially rejected.

The other problem they have in honoring the regional Mexican singer by naming a street in Boyle Heights is that it is also documented with photographic evidence that he inappropriately touched women by putting a hand on the breasts of some young women.

But he also pointed out that Fernández was an unfaithful and womanizing: “A lot of people have their own challenges, but if we put all these legitimate points together, we have a chance to prevent a street from being named after him.”

Silvas said that while the vast majority of Boyle Heights residents are Latino, there are also Jews, Japanese Americans, African Americans, and people with addictions and from the LGBT community. “Ironically, there is a meeting place for anonymous alcoholics a few blocks down the street that they want to give Fernandez’s name.”

It will be this Wednesday when the members of the Neighborhood Council vote for the motion that rejects the change of name of Bailey Street to Vicente Fernández.

“Here it is also important to have a public discussion and see if the LGBT community does not find Vicente Fernández’s comments significant.”

He mentioned that if you ask the mariachis or people of a certain generation if Fernandez should be honored by naming a street, they will automatically give their approval, but he insisted that you have to see the entire community and have a variety of opinions.

The final vote will be this Wednesday for the motion to reject the change of name from Bailey to Vicente Fernández.

“It can be approved, denied or an application to amend it can be submitted.”

However, he clarified that, regardless of the vote, the Neighborhood Council is just an advisory body that issues recommendations, and the Los Angeles Council can simply ignore them and go ahead with the name change.

“If so, it would be a profound mistake,” Silva emphasized.

But not all Neighborhood Council members are against it. Carlos Montes said that he does support renaming Bailey Street with the name of Vicente Fernández.

“Silvas is not a person from the community. He’s not Latin. He is Hungarian-American. He lives in Eagle Rock, but is on the Neighborhood Council because he owns property in Boyle Heights. He is a real estate developer.”

He added that Silvas belongs to a group of Council members who do not identify with the Latino community, and there are some Latinos who support him, but they are people who do not recognize their Mexican heritage.

“Vicente Fernández is already dead and cannot defend himself against the accusations made against him. Why do they take out these accusations until now?”, he questioned.

He added that Vicente has many merits, since he put Mexican regional music very high and won many awards such as the Latin Grammy.

“It is also a very small street that they want to give his name to.”

Instead, he said they would like a larger street to be named after him and a statue to be erected in the Plaza del Mariachi.

“A large part of the community and the mariachis love Vicente Fernández. It is only a very small group that is opposed.”

In early January, Councilman De León filed a motion to rename the street adjacent to the historic Mariachi plaza in Los Angeles’s Boyle Heights neighborhood after Fernández. Bailey is a small street that runs from First Street to Pennsylvania Avenue.

El Charro de Huentitán, died on December 12 at the age of 81.

“He was an icon of Mexican culture. Although he began his musical career in a humble town. His influence has reached every corner of the world because his music has become a part of the daily life of Latino families in Los Angeles,” said De León when he paid tribute to him at the Cabildo Angelino.

He added that “Chente” sang songs of love, betrayal, pain and love for his beloved Mexico, which are heard in almost every neighborhood.

In 2019, Vicente Fernández declared that he would not accept a liver transplant out of fear that it came from a homosexual or a drug addict. Later, he apologized for his homophobic comments.

In January 2021 he also apologized for the sexual abuse accusations against him, saying that he did not intentionally put his hand on the breast of the young woman.

The Opinion contacted the office of Councilman Kevin de León for comment on this controversy, but they did not reply.