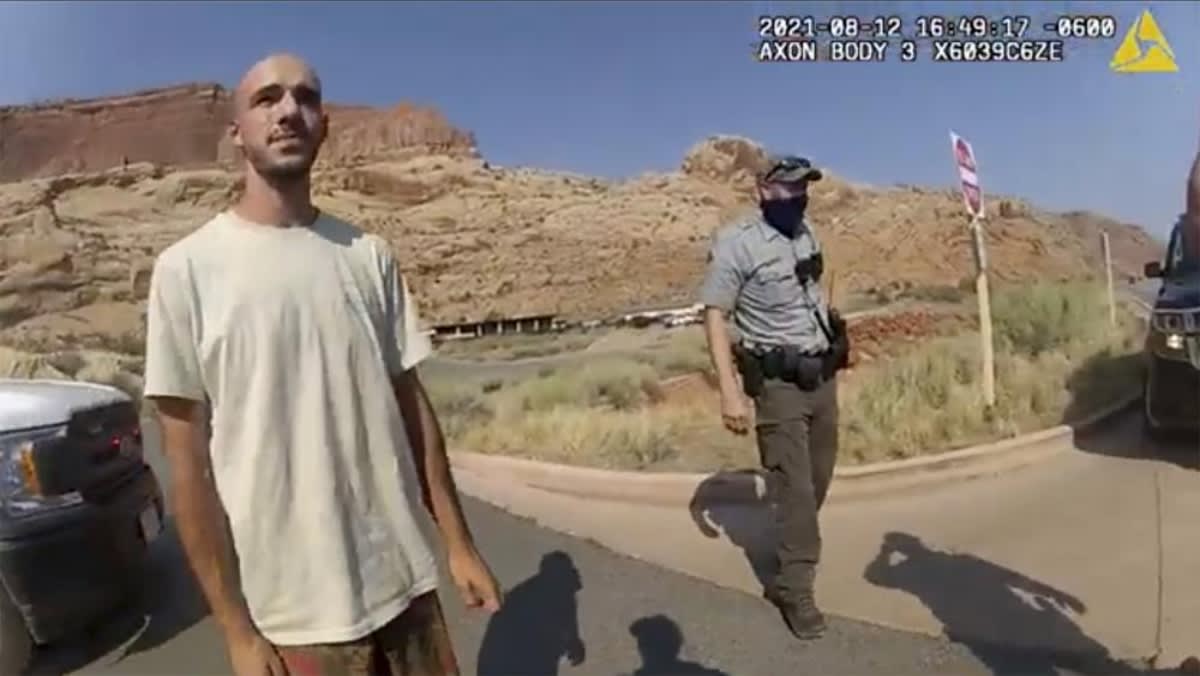 Petito boyfriend arrest warrant. The US Justice issued this Thursday an arrest warrant against Brian Laundrie, the boyfriend and fiancé of the youtuber Gabby Petito, the young woman found dead in a reservation in Wyoming to which they both went on an excursion, in a case that has attracted national attention, according to the Efe news agency.

Brian Laundrie, who has so far remained unaccounted for since the beginning of last week and is wanted in a vast area of ​​northwest Florida, near where he resided with his parents and Gabby Petito, had until now been singled out only as a “person of interest”.

However, a Wyoming federal court issued an arrest warrant based on a federal grand jury indictment for a charge related to Laundrie’s activities following Petito’s death, the Federal Bureau of Investigation (FBI, in English).

Meanwhile, a North Port, Florida personal injury law firm, Boohoff Law, offered a reward of 20,000 on Thursday for information leading to Laundrie’s whereabouts. The body of Petito, 22, was found last Sunday in Grand Teton National Park (Wyoming) after several days of an intensive search for the young woman.

Petito boyfriend arrest warrant: They accuse him of using a debit card

According to the news agency The Associated Press, Gabby Petito’s boyfriend was accused of unauthorized use of a debit card after the disappearance of his fiancée, while investigators continued looking for him this Thursday in the dark swamps of Florida.

A federal grand jury indictment filed in the U.S. District Court in Wyoming alleges that Brian Laundrie used a Capital One Bank card and someone’s personal identification number to make unauthorized withdrawals or overcharges. of $ 1,000 during the period in which Petito disappeared. It does not say who the card belonged to.

Petito boyfriend arrest warrant: His death is classified as a homicide

The US Federal Bureau of Investigation (FBI) noted this week that the Teton County Coroner’s Office preliminarily classified Gabby Petito’s cause of death as a “homicide” while evaluating the final autopsy results.

In July, Brian Laundrie and Gabby Petito embarked aboard a van on a trip through reserves and national parks in the western United States, however, on September 1, the young man returned in the vehicle and without his girlfriend to the family home in Florida, where the couple also resided.

Petito boyfriend arrest warrant: He refused to cooperate with the authorities

After several days without hearing from the youtuber and vlogger Gabby Petito, whom her parents learned about for the last time while she was in Grand Teton National Park, her family reported the disappearance on September 11 and the authorities turned to a nationwide search.

The intense search through the swamps of the state of Florida for the boyfriend and fiancé of Gabby Petito, Brian Laundrie, occurs after he and his family refused to collaborate with the authorities in the investigations to find the youtuber and after he left found the body of the young woman. Filed Under: Petito boyfriend arrest warrant.

Petito boyfriend arrest warrant: Have you already found him?

Before an arrest warrant was issued against Petito’s boyfriend, a flight attendant in Canada reported that she saw a man with similar features to Brian Laundrie, who is the main suspect in the disappearance of the 22-year-old travel vlogger. years. The woman says she was very similar to the American man wanted by the police.

It was the first of September when after a trip to the United States, the fiancé of the youtuber Gabby Petito, Brian Laundrie, returned home without her, causing the alarm of his family and friends, who found no logical explanation for the disappearance of the young woman, who days before was with her partner. Filed Under: Petito boyfriend arrest warrant.

And it is that after several days of this event, the young Brian Laundrie became the main suspect in the disappearance and already confirmed death of the 22-year-old youtuber, all this because the man did not want to cooperate with the police, in addition to that his attitude was somewhat strange to the authorities who were working on the case.

Days later and after a break-in at her home, causing her parents to be taken to the police station, Gabby Petito’s boyfriend disappeared without leaving a trace, or at least that was believed, since recently a flight attendant in Canada claims to have seen to a man with similar features to Brian Laundrie, causing her to question whether it is really him. Filed Under: Petito boyfriend arrest warrant.

They claim to have found Gabby Petito’s boyfriend

According to the portal The Sun, the flight attendant claims to have found Gabby Petito’s boyfriend, this because, in her words, it agreed with the characteristics that the police were sharing, only that the alleged man was with a more prominent beard and wearing a mask that covered part of his face.

Through a video posted on her TikTok account, the user by the name @cwlynn reported that her initial plan was to spend the night in a hotel in Toronto, Canada on September 20, and that when she went downstairs to pick up her food, she did not she could believe what she was seeing, since she claimed to have seen a man very similar to Brian. Filed Under: Petito boyfriend arrest warrant.

She had features similar to his; They claim to have found Gabby Petito’s boyfriend

The Sun newspaper reports that in the TikTok video, the flight attendant recounted her “discovery.” And it is that just when he was picking up his food at home, he saw a man who looked a lot like Brian Laundrie, boyfriend of 22-year-old youtuber Gabby Petito, describing the suspect for homicide with a “nervous attitude” when he was about to leave the hotel.

After this she observed how he got into a car with another man and left. Although the girl did not confront Brian, she did manage to take a photograph of him from a distance, which she uploaded to her TikTok account. In the image you see a bald man, with great facial beauty and a mask that covered his chin, features that may be familiar to the characteristics that the police provided. Filed Under: Petito boyfriend arrest warrant.

Will it be her boyfriend? They claim to have found Gabby Petito’s boyfriend

The girl who possibly described Brian’s whereabouts comments that after seeing this man, she alerted the hotel about this and more than anything about the suspicious activity that he had, not forgetting the great resemblance he had with Brian Laundrie. According to reports at the time, the staff confessed that they did not know where he was going, as he had allegedly found the wrong hotel.

The Sun brings out the words that the flight attendant said during her video, showing a bit surprised by his discovery and leaving in doubt whether he was really Gabby Petito’s boyfriend or was he just a man similar to him: “I’m not sure whether he looks like him or I’m just getting confused, ”the young woman reported. VIDEO HERE. Filed Under: Petito boyfriend arrest warrant.

Gabby Petito’s family reacted after the initial autopsy of a body found Sunday that turned out to be that of their 22-year-old daughter; while authorities continue to search for her fiancé, Brian Laundrie, marked as a person of interest in this case.

They still had hopes of being able to find her alive, but this Monday the FBI offices in Denver issued a statement confirming the death of Gabby Petito. So her family returned to social networks to express their deepest sorrow for the young woman’s death. Filed Under: Petito boyfriend arrest warrant.

The Petito family created a Facebook page with the goal of “Finding Gabby”. After confirming their most feared suspicions, they published a message in which they simply wrote: “Our hearts are broken.”

The forensic report accompanied the regrettable message. In the document, the authorities indicated that the human remains discovered on Sunday were those of Gabby Petito and that it is also presumed by the manner of death that it was a homicide. Filed Under: Petito boyfriend arrest warrant.

The pain of the Petito family

Later, the family also shared a moving image of Gabby in which she wears angel wings, a halo and is accompanied by two white doves, as if announcing her arrival in heaven.

“#Justiceforgabby,” they wrote next to the postcard. That is precisely where the case is. The authorities are looking for her fiancé Brian Laundrie, and it is that all the clues point him as the possible culprit of the death of the youtuber. Filed Under: Petito boyfriend arrest warrant.

Laundrien and Petito decided to travel by van for four months around the country. They had already been on the road for about two months, when suddenly Laundrie returned home to Florida. The man arrived in his truck on September 1, but Petito was not there.

Laundrien and Petito decided to travel by van for four months around the country. They had already been on the road for about two months, when suddenly Laundrie returned home to Florida. The man arrived in his truck on September 1, but Petito was not there. Filed Under: Petito boyfriend arrest warrant.

The man also said he heard Petito say to Laundrien, “why do you have to be so mean?” She added that from what she saw, “it was like the guy was trying to leave her, and maybe grab her phone? I’m not sure”.

The photos on Gabby Petito’s Instagram account do not reflect any problems, but apparently this was not the only fight of the couple. The young woman’s parents reported their daughter missing on September 11 after several days passed without her answering their calls or messages, AP reported. Filed Under: Petito boyfriend arrest warrant.

Now the police are trying to find Brian Laundrie, who is also missing. Gabby Petito was last seen on August 24, 2021, as she was leaving a hotel in Salt Lake City, Utah. At the time, she was accompanied by her fiancé, The Sun reported.

Gabby Petito’s body was found Sunday in Wyoming’s Grand Teton National Park and on Tuesday, a woman claimed to have seen Laundrie “acting strange” at the Wyoming camp, near where the body was found. Filed Under: Petito boyfriend arrest warrant.