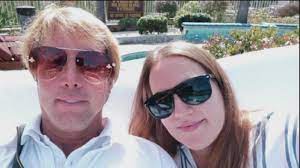 US federal and state authorities in Baja California are trying to locate the suspect in the murder of a mother, a veteran of the US Army, whose remains were found in the trunk of a car, while her baby was apparently missing for weeks.

The Federal Bureau of Investigation (FBI) informed La Opinion that it will ask for the public’s help in locating the suspect, Tyler Adams, a 50-year-old white American, to question him in connection with the death of veteran Racquel Sabean.

The problem is that the Baja California state authorities freed the suspect, located after finding Sabean’s body, and the man crossed the border Thursday through the San Ysidro port of entry by identifying himself with a credential, not a passport.

To complicate matters, the FBI told La Opinion that the man is a fugitive from justice in Hawaii, from where he fled with the help of a false identity and later it was discovered that he is an expert in camouflage.
At the border, he identified himself as Aaron Bain, as recorded on security video at 1:30 p.m. on June 16.

Adams goes by at least a dozen aliases, and has been known to change his physical appearance before as well. In photographs provided by federal authorities, the subject appears to have undergone recent cosmetic surgery.

They traveled to Tijuana

The case is under investigation, so there are still a lot of loose ends. From what is known so far, the couple and the baby crossed the border into the city of Tijuana last April.

When they arrived in Tijuana on April 17, they were identified as Racquel Sabean, her seven-month-old daughter Valentina Sabean, and Racquel’s husband, Paul Phillips.

In the following weeks, the couple had very little contact with their Tijuana neighbors, but on May 31 those neighbors warned the police that the vehicle they saw Racquel was driving had a strong odor and they feared it contained a corpse.

Authorities broke into the car and found the woman’s remains wrapped in white sheets. They did not immediately reveal the possible cause of Sabean’s death, but since the baby was not located, they issued an Amber Alert.

In Baja California, the same type of Amber alert is issued as in California and this time it took 15 days to locate the baby in Rosarito, where Adams was detained for questioning about the body found.
“Adams was questioned by Mexican authorities regarding Sabean, but was uncooperative,” the FBI reported. Without having evidence against him, the Baja California state authorities had to release him.

Less than 24 hours later, the man was crossing the border into California.
“Adams entered the United States through the San Ysidro port of entry at approximately 1:30 p.m. on Thursday, June 16, 2022, using the alias Aaron Bain. Adams is known to use multiple false and stolen identities,” the FBI said.

Meanwhile, the baby, Victoria, remains under state care, confirmed Berenice López Mesa, attorney for the protection of children and adolescents in Baja California.
Victoria’s grandparents, parents of Racquel Sabean, traveled from Vacaville, California, to see their granddaughter and said they felt satisfied because “she is in good hands, we see that they really care for her and love her.”

Attorney López said that with the help of the United States consulate in Tijuana they could provide the baby with a passport to be delivered at the border by the National Institute of Migration (INM).

Only before, as a requirement, the authorities have to do comparative DNA tests to confirm that Victoria is the daughter of Racquel Sabean.
When the baby crosses the border back to California, she will be placed in the custody of her grandfather, David Sabean.

Meanwhile, the FBI and the Customs and Border Protection (CBP) office are trying to locate Adams, still without charging him.

This is the description the FBI provided of the suspect:
Tyler Adams, age 50, white, male. He is 5 feet 9 inches tall and weighs approximately 175 pounds. He has brown hair. He was last seen wearing a short-sleeved yellow button-down shirt, tan pants and black tennis shoes.

You have possible puffiness under your eyes.