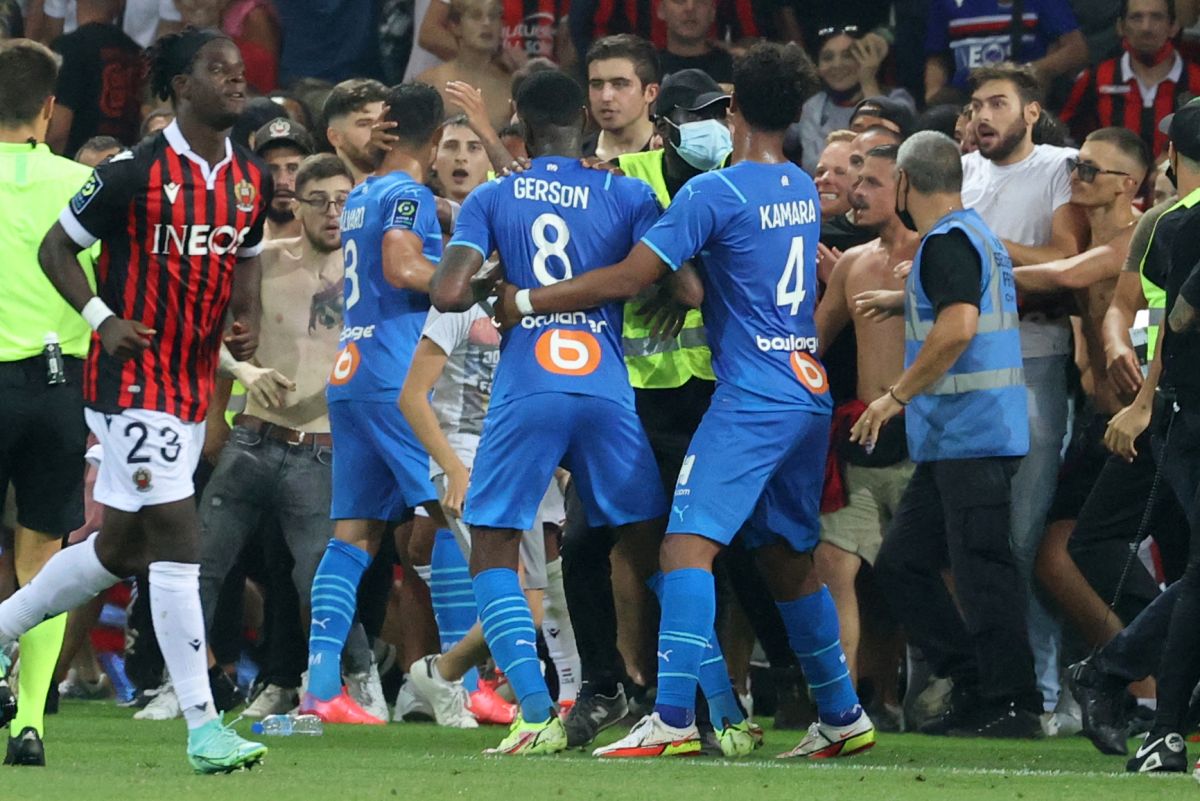 The fans who invaded this Sunday’s league match between Nice and Olympique de Marseille they risk a prison sentence of up to three years and a fine of 45,000 euros, reported this Monday the French Prosecutor’s Office.

The Nice Prosecutor’s Office detailed in a statement that investigations have been opened that have resulted in several charges against the suspects of having thrown objects at the Marseille players and then have invaded the pitch from the Allianz Arena in Nice.

The Prosecutor’s Office detailed the charges for “entering a playing field preventing the normal operation of a sports competition, throwing objects that presented a safety hazard, use of stadium furniture as a projectile, serious degradation and aggravated voluntary violence during a sports tournament ”.

If these charges are proven in court, suspects may incur a maximum prison sentence of three years, 45,000 euros fine and the prohibition to enter a sports field for five years.

The investigations opened at the hands of the departmental security services of the Alpes-Maritimes prefecture use the video images to identify the perpetrators and purge the responsibilities of incidents between the fans of both teams, as well as the eventual responsibility of the players and the coaching staff of the two clubs.

The Argentine DT of Marseille, Jorge Sampaoli, in his sauce. An embarrassing episode that took place on the Allianz Riviera in Nice. pic.twitter.com/MOd1YizCX5

The episode has shocked France, whose Minister of Sports, Roxana Maracineanu, warned that “A red line has been crossed” for which there will have to be sanctions.

Several ultras supporters from the south stand of the Nice stadium threw plastic bottles at the OM players until one of them hit French international Dimitri Payet, who sent her back to the rostrum.

From there, numerous local fans jumped into the field of force, despite the efforts of security personnel to contain them, with the intention of attacking the Marseille players.

URGENT! Nice fans entered the field of play to attack those of Marseille in the # Ligue1xESPN. pic.twitter.com/Vp7iAKvMgW

Players and staff from both teams were involved in the fray and the match was suspended for more than an hour. The score at that time was 1-0 in favor of Nice.

Nice ultras give a bottle to Payet, who bounces with the stands

Olympique de Marseille refuses to return to the field.

The LFP decided that the match should be resumed, but the OM players, backed by their president, the Spanish Pablo Longoria, decided not to return as they considered that their safety was not guaranteed. In principle, the LFP should declare Marseille the loser of the match for having refused to continue.