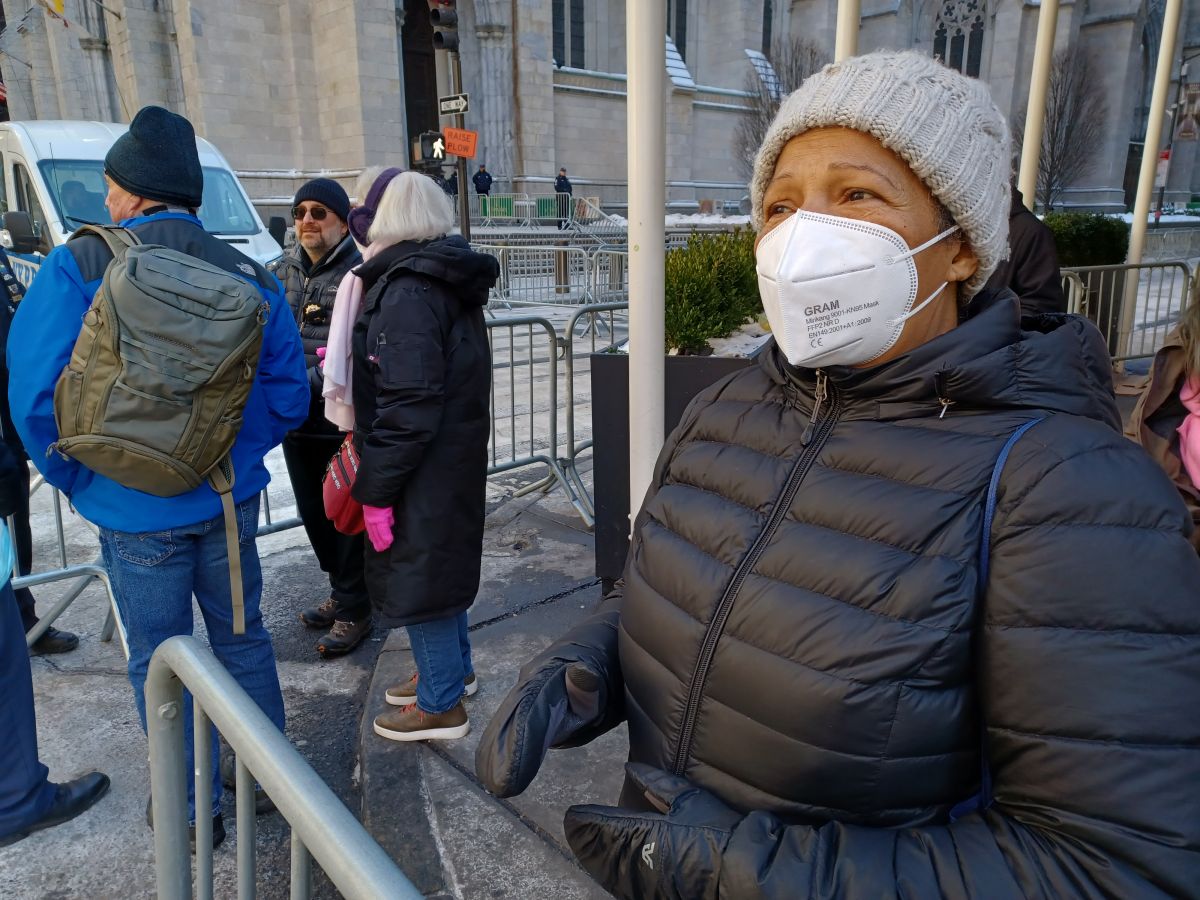 A new “blue tide” once again bordered several blocks around St. Patrick’s Cathedral on Manhattan’s Fifth Avenue on Tuesday. This time, to kick off the funeral ceremonies for the New York City Police Department (NYPD) officer, Wilbert Mora, the second police officer killed in Harlem with his partner Jason Rivera, when they answered a domestic violence call. Both were of Dominican origin.

The acts of the last goodbye to Mora were a scene of pain, which New Yorkers already experienced in the surroundings of the same temple last week. Hundreds again showed up to offer their prayers for the relatives of the 27-year-old officer, but also to offer their support to the Uniformed.

Among the crowd, the Puerto Rican Margarita Vásquez, a resident of Manhattan, He was praying on a corner of 50th Street, a few meters from where the remains of the officer already rested.

This mother of eight children, assures that she knows perfectly how Mora’s mother’s “heart is found”.

“I also lost my son two years ago. He served 20 years in the Navy. Returning from Afghanistan he fell ill. And he almost died in my arms. I know what that mother who is in there in front of this coffin is feeling. That’s why she came here. The Dominicans and we are brothers.” the islander sadly expressed.

Margarita, who has lived in New York City for 30 years, explained that the death “of these two boys”should be a new sign that should encourage support for the police who are the ones who protect citizens.

“That atmosphere of fear and criminality was not seen for years in this city. And as a mother I only bet that no family has to live this moment for violence. Every death must be taken very seriously. Otherwise, the time will come when we are going to get used to this,” said the islander.

“I wanted to be the best police officer”

Exactly 11 days ago Wilbert Mora, was shot in an apartment in Harlem, on West 135th Street, along with his other Dominican partner, when they responded to a 911 call from a mother who reported her son engaging in aggressive behavior. Both officers upon entering the property were greeted with a burst of gunfire, detonated by African-American Lashawn McNeil, who was also killed in a counteroffensive by a third uniformed officer, according to the official version.

The other officer, Jason Rivera, who was posthumously promoted to the rank of detective, died the same night as the shooting. Mora was shot in the head and a bullet lodged in his brain. He was taken off life support at a Manhattan hospital four days later. His heart, liver, pancreas, and both kidneys they were donated to five other people before they passed away.

The remains of this police officer who entered the NYPD in 2018 and worked tirelessly to be promoted to the position of sergeant, were also taken to the main altar of the historic New York cathedral to receive honors by being considered a “triple hero”.

Mora had obtained a bachelor’s degree from the City University of New York (CUNY) the same year he joined the ranks of the largest police institution in the country. He transpired that in his short career he had had a total of 35 successful procedures and arrests in his fight against crime.

A group of his colleagues from Harlem’s 32nd Precinct, where he served, carried the coffin at 11:43 on Tuesday, wrapped in the official flag of the police force.

“He was a gentle giant with a strong physique and a warm heart.. She was always happy. He wanted to be the best police officer”, was how a fellow Dominican described him in a few words.

Minutes later he entered the wake, the troubled officer’s family, to participate in a private ceremony, before the doors were opened to the public.

Humanitarian visas for his uncles

According to information shared by the Dominican newspaper Diario LibreNYPD applied for humanitarian visas at the United States Embassy in the Dominican Republic, for the uncles of the police officer of Quisqueyan origin, to make it easier for them to attend funeral ceremonies scheduled for this week.

“The request was processed through the Department of State in Washington DC, explaining the reason and the need for it to be processed. the officer’s uncles will travel to New Yorkto be present at the wake and other acts of homage to his nephew”, specified the island newspaper.

In addition, it was detailed that Juan José and Yudelka Altagracia Jiminian traveled to the country last Friday, January 28, to help care for the devastated parents of the slain police officer, who “due to pain and trauma need to be helped.”

“It is a pain for Hispanics”

While the ceremonial and religious honors were being performed inside the temple, on the outskirts, hundreds of New York residents continued to arrive to join the pain of this Dominican immigrant family and those in uniform.

In that group was the Puerto Rican Liz Castro, who made a long line in the middle of freezing temperatures. There, he was willing to wait patiently along with dozens of officials to enter the church, noting that he did not know his relatives, but he came from Brooklyn just for a visit. “a matter of solidarity as a mother”.

“I don’t know this family. But this murder is also a pain for all Hispanics who have raised our families here. I came to pray. to show my solidarity. This is a horrible fact that should move us to support our police officers, ”he stressed.

He too Colombian Pedro Diaz took the afternoon to attend this wake.

“I also came last week to honor the other young police officer. Today I come again because as residents here. As immigrants who come from countries with high crime. We cannot allow the city to pass into the hands of criminals”narrowed down

NYC lives a challenge against the underworld

The low of these two uniforms of Hispanic originwho died on the job in New York City, added fuel to the already inflamed debate over how to deal with rising crime on the streets.

The new mayor Eric Adams, with four weeks in office, has made it clear that his formula will be to reinforce the police presence with special squads in the most violent neighborhoods and promote changes in the reform of the Bail Law, which prevents judges from post bail for almost all misdemeanors, as a requirement for a detainee’s release pending determination of guilt or innocence.

But already in the city, legislators who have supported reforms in criminal justice and civil organizations have “bared their teeth”, in rejection of possible changes in the spirit of this law. Which anticipates a “train wreck” in the coming months.

Beyond the extremes, in the streets some emphasize that it is time to find an intermediate point.

“We must not deny that in the past the police committed many abuses, but we must not fail to recognize that the city is currently experiencing a very bitter moment due to violence. Because authority was taken away from officials. It seems to me that a balance must be found, ”argued the Dominican journalist César Romero, who attended the funeral of his compatriots in downtown Manhattan.

In this sense, Benjamín García, board member of the Guardian Angels of New York He asserted that the attack in which these soldiers died should remind us that the streets belong to “good people, to workers, to the majority, not criminals to whom in recent years some laws have given oxygen.

Mora’s officer’s wake was scheduled between 1 pm and 8 pm this Tuesday at the Cathedral of San Patricio. The funeral will be held this Wednesday at 10 am in the same place. After the service, a caravan will carry the casket to the Calvary Cemetery in Woodside, Queens, where he will be buried.

30% of uniforms are of Hispanic origin

The murder of Mora and Rivera, In the same operation, it has also brought to the fore the growing presence of uniformed officers of Hispanic origin, who are part of the police force considered the most powerful in the country and on the list of the first in the world: More than 30 percent of the almost 35,000 uniformed NYPD officers are Latino.

A series of data shared by the The New York Times (TNYT) confirms that the ranks of Latino officers “have grown in recent years alongside Asian officers, while the proportion of African-American officers has stagnated.”

The prestigious New York newspaper describes that officers Rivera and Mora were part of a growing contingency of Dominican officers who grew up in Big Apple neighborhoods during the heyday of stop-and-frisk policies.

TNYT noted that both police officers, who were just beginning their careers, were teenagers when a federal ruling in 2013 declared that the tactics known as ‘Stop and Frisk’, “violated the civil rights of the majority of the young black and Hispanic of the city, who were stopped and searched millions of times in search of weapons and drugs.

Since then, the number of stops has plummeted, but civil organizations say that in the same way 90% of the searches are aimed at young people from ethnic minorities in the city.