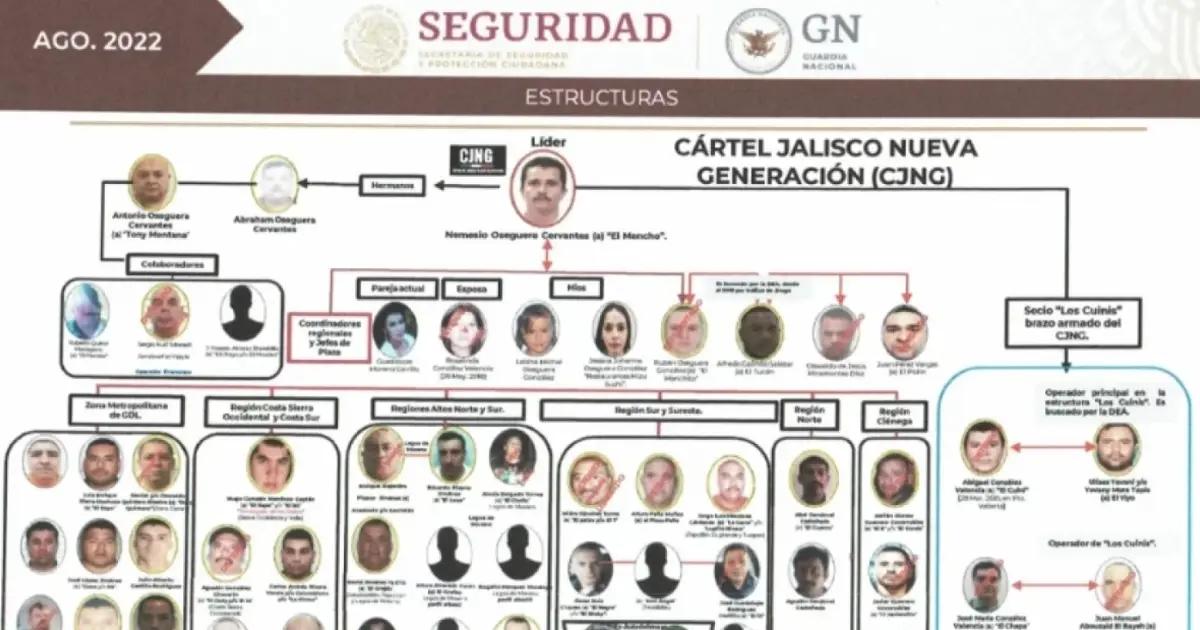 The Mexican government’s list of priority targets includes several drug traffickers from the CJNG, the Jalisco Cartel – New Generation, or the Cartel of the Four Letters.

The criminal organization headed by Nemesio Oseguera Cervantes, ‘El Mencho,’ has a presence in almost every state in the Aztec country but has suffered several blows in 2022.

Throughout 2022, American Post News has publicized the capture of some of the cartel’s leaders, although there are still heads that remain at large, such as El Mencho himself.

The CJNG drug traffickers detained this year by the different security agencies are:

Who are the captured CJNG drug traffickers?

Francisco Javier Rodríguez, a.k.a. “Señorón,” one of the CJNG’s narcos and operator in Morelos, was arrested on April 30 in Mazatlán, Sinaloa, after taking over the power left by Santiago Mazari Miranda, “El Carrete,” leader of the criminal group Los Rojos. His alliance with ‘El Mencho’ allowed him to gain control of crimes such as extortion.

Saul Alejandro ‘N’, alias ‘El Chopa,’ was killed by the military on April 22 in Puerto Vallarta. This criminal is allegedly linked to the murder of the former governor of Jalisco, Aristoteles Sandoval Diaz.

The communiqué of his execution stated that he suffered gunshot wounds and was taken to a hospital in Puerto Vallarta, where he died on Friday, April 22.

The shooting where he died occurred around 3:00 p.m. last Friday in an exclusive area of Marina Vallarta. That day the National Guard personnel suffered aggression with firearms from a private vehicle.

Erick Valencia Salazar, better known as ‘El 85’, is one of the founding members of the CJNG. After serving his sentence for drug trafficking crimes, he was captured two years later, on September 4, 2022, in Tapalpa, Jalisco.

Ricardo Trevilla, the Chief of Defense Staff, said that his capture is for extradition purposes as the US Drug Enforcement Agency (DEA) still identifies “El 85” as “El Mencho’s” main associate and advisor.

In his arrest, three men were detained, and approximately 1,000 tablets of possible fentanyl, 750 grams of probable methamphetamine, 4 handguns, 4 magazines, various cartridges, and doses of likely cocaine were seized.

Earlier this year, Carlos “N,” alias Don Carlos, head of the CJNG in the area, was arrested. Reports point to him as the culprit of the operation, drug trafficking, and distribution of food supplies in communities in the states of Jalisco and Nayarit.

In a Federal Government communiqué, the man was said to have one kilogram of a substance with characteristics similar to methamphetamine.

In mid-September, another CJNG drug trafficker was arrested in Cancun, Quintana Roo, Luis “N,” alias “Lucifer,” along with nine other cell members that answered to Luis in the tourist destination.

During his arrest, 136 bags of drugs, apparently marijuana, a 9-millimeter caliber firearm with eight cartridges, and cell phones were seized.

On November 13, Silvano “N” alias “F25” or “Mano Seca” was arrested in Tequila, Jalisco, by members of the Sedena and the National Guard, who is considered to be the CJNG operator on the borders of Jalisco and Zacatecas.

On October 2, Cesar Augusto, better known as “El Gafe,” was arrested in Andares for being the alleged regional leader. He also coordinated CJNG cells in Tlajomulco de Zúñiga and El Salto, Jalisco.

Authorities said that the subject was responsible for coordinating cells of drug dealers, hitmen, and hawks and recruiting new members of operational cells in different states.

When he was arrested, 1,000 fentanyl pills were seized, along with long and short weapons, grenades, cartridges, and vehicles.

He is also linked to homicides, kidnappings, and the events in a shopping mall in the Puerta de Hierro area of Zapopan on October 2.

The last CJNG leader arrested this year has been Humberto or Diego Armando, alias “El Pantera,” head of the Uruapan plaza, who was captured on December 6 in the state of Michoacán.