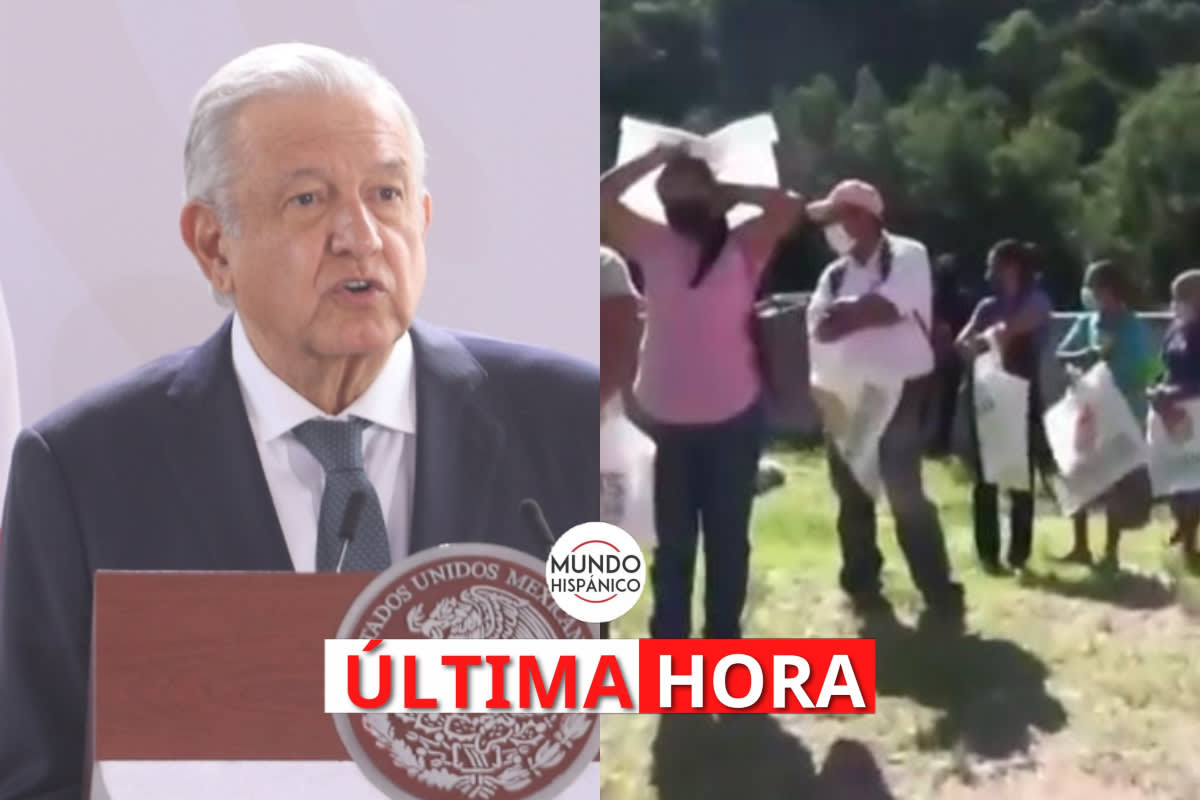 AMLO creates “Tianguis Del Bienestar” to give confiscated items to the poor. The federal government announced the creation of the Tianguis del Bienestar to give away items such as clothing, footwear, toys, utensils and household tools, among others, reports Agencia Reforma.

The distribution of the AMLO Tianguis will be carried out in 70 poor municipalities in 4 states of Mexico, says Agencia Reforma. The objects are part of the confiscated by authorities and which are distributed by the Army in one of its multiple added tasks.

“We are going to clean all the warehouses and they will be handed over to the people, to the poor,” said President López Obrador in a morning conference. “You go to a poor municipality and give yourself to the people: clothes, footwear, toys for children, everything that is in the warehouses.”

Thousands of beneficiaries with the Tianguis de AMLO

For her part, the Secretary of Security, Rosa Icela Rodríguez, explained that the program has already started in areas of the Guerrero mountain. “In this first stage, one million 850 thousand articles were classified, this first stage in 19 municipalities of Guerrero,” he said.

“In Oaxaca, 40; in Chiapas, 15; in Veracruz, 5. In total 894 thousand 998 people and 223 thousand 750 families ”, detailed according to the Reform Agency. “It has already started in Atlamahancingo, Guerrero. The Battalion of the Ministry of Defense is arrived at because there is space to spend the night, the articles are classified and the tianguis is installed, we were Wednesday and Thursday, 1,845 people benefited, “he said.

Tianguis is created by order of AMLO to help the poor

He added that storing the insured objects cost the Government at least 147 million pesos a year. “There are two institutions that have warehouses and spend resources by renting spaces. In the case of the SAT, 29 warehouses, 14 patios and a warehouse with a patio, are 67.6 million pesos a year ”he declared.

Who will attend the AMLO Tianguis?

The government assigned a new task to the federal forces: to transfer confiscated merchandise to poor communities and give it away at “Tianguis del Bienestar”. This work is carried out by elements of the Army, the Secretariat of Security and Citizen Protection (SSPC) -which coordinates the program- and the National Guard (GN), details the Reform Agency.

Officials from the Tax Administration Service (SAT), the Institute to Return the Stolen to the People (Indep), Public Function (SFP) and the state governments also participate. The free delivery of items such as fabrics, clothing, footwear, toys and tools began last Wednesday.

Who is in charge of the AMLO Tianguis?

A video of the SSPC screened yesterday at the morning conference shows that the entire distribution chain is run by the SSPC and the Army. From the transfer of merchandise in military vehicles and the classification of articles in SEDENA barracks, to the delivery by hand by members of the SSPC, says Agencia Reforma.

89 public servants participated in the first deliveries in La Montaña de Guerrero, of which 32 are from the SSPC-GN, 20 from Sedena, 19 from SAT-Indep-Aduanas, 16 from Guerrero and 2 from the State Government. “This joint action is coordinated by Rosa Icela Rodríguez, Secretary of Security,” confirmed President Andrés Manuel López Obrador.

“She coordinates, but the Treasury participates, the Defense Secretariat, the Welfare Secretariat, Customs, the SAT participate, they all participate and this plan has already started,” said the president. Rodríguez announced that confiscated and forfeited items will be distributed in 70 municipalities with high rates of extreme poverty in Guerrero, Chiapas and Veracruz.

On the other hand, President Andrés Manuel López Obrador was at the center of the controversy by stating that “certain risks must be taken” when returning to face-to-face classes. However, it guaranteed the application of protocols to reduce the possibility of COVID-19 infections.

“We have to take certain risks,” says AMLO about the children’s return to school.

He also said that he will act quickly in case of detecting someone sick in the schools. “We have to take certain risks, like everything in life. Imagine if we don’t go out because something could happen to us, because we’re going to stay there all the time, locked up, ”he said.

“No, we have to face adversity, the paths of life are not as imagined,” he added in the morning before asking to put the song with that name. Although he emphasized the importance of returning to classes, López Obrador clarified that it will not be mandatory.

In Mexico, the return to face-to-face classes will be voluntary, so families will be free to decide, says Agencia Reforma. Those students who do not go to educational establishments, the president added, must take distance classes.

“The parents are free, but we have, as an authority, the obligation to start with face-to-face education,” he said. López Obrador stressed that going back to school is not only an educational issue, but also a social one.

He said that children should no longer be locked up or “subject” to the ‘nintendo’. López Obrador accused a “bombardment” of the media about the contagion of COVID-19 in minors when he spoke of going back to school.

For the President, this information seeks to confuse the population for being a time of “buzzards”, says Agencia Reforma. “It is important for the debate because as the bombardment of the unofficial media is so much that people get confused, a lie repeated many times can become the truth,” he added.

Did AMLO ‘mock’ the pandemic?

Representatives of political parties condemned the expressions of the President, Andrés Manuel López Obrador, which minimize the risks of returning to classes when the highest peak of the pandemic is at hand. The spokesman for the PRI deputies, Hector Yunes, criticized the phrase of the federal Executive regarding that it was necessary to take the risk that the return to the schools means.

He ironed about the song “Paths of Life”, which the President asked to hear at the morning press conference, pointing out that they are rather paths that lead to death. “No, Mr. President. Protecting our families to avoid the spread of COVID-19 is not an act of cowardice. ‘The paths of life’ we must walk them responsibly, ”he reproached him.