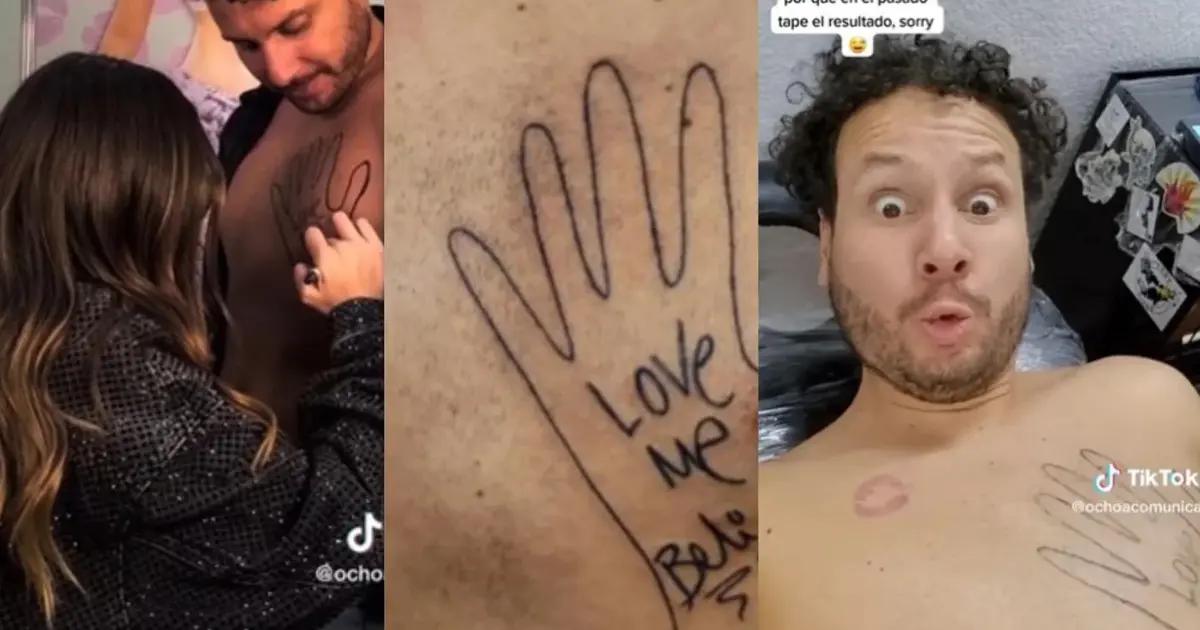 A follower of Belinda got a tattoo to pay homage to his idol. The fan embodied the hand of the famous pop artist on his skin. The design process was recorded through a video that the same fan uploaded to the TikTok platform, which has more than 8,000 views, 34,000 likes, and thousands of comments, such as “What a cool vibe. Super BeliFan”, “I pray to God that my husband doesn’t get it if he doesn’t also tattoo it,” “ Santa Belinda,” “I thought it was a joke, but the man really did it, he tattooed that hand.”

In the said video clip, the young man appears in coexistence with Belinda, where he takes the opportunity to ask her to mark the silhouette of the palm of his hand on his skin. The excited singer agrees and asks, “But where do you want it?” The boy replies: “Wherever you want,” giving creative freedom to his favorite singer.

Where is the heart? here you want

“Look, it turned out pretty, right?” Belinda smiled once she finished drawing her hand on the fan’s chest. Then he asks his follower again what he can write inside to complete the design. To which he jokingly replies, ” Property of Belinda, not whatever… Belinda was here.”

Finally, the artist wrote the phrase “Love Me” inside the silhouette, accompanied by her autograph, “Beli.”

The TikTok post continues, and in another scene, the user @OchoaComunica is seen going to a studio and the tattoo artist working on Belinda’s drawing in black. One of the most iconic songs by the pop star, Ángel, plays in the background, and just when the tattoo is finished, the phrase “now I have you on my skin” is heard.

The young man closes the video with a photograph showing off his two “belitattoos,” since the first is a kiss that the interpreter of Light without gravity gave him in another coexistence. Belinda’s lips were marked on a fan’s clavicle. That tattoo was done in a pink tone and immortalized in another video.

The title reads “Santa Belinda,” and the soundtrack of said video clip recites a prayer for Belinda.

Santa Belinda of loves. Patron of assfuckers, queen of moorings and of the enchanted toad. I ask you to do a miracle for me so that they also buttfuck with me and have my name tattooed on them. Amen

Said sentence circulated on social networks and was created by the singer’s fans when they were moved by the attitude with which their idol took the comments after their controversial breakups, especially the most recent one with Christian Nodal.

Through her Instagram stories, the interpreter of Sal de mi piel published some viral clips of fans praying to her, and among the most prominent, there was a user who even put her photo next to a candle.

The singer since then decided to take this with humor and thanks for the unconditional support that her “Belifans” have given her.

It should be noted that the fan who got the tattoos is on TikTok and calls himself Ochoa Comunica since he has been mentioned as resembling Luisito Comunica and the soccer player Memo Ochoa.