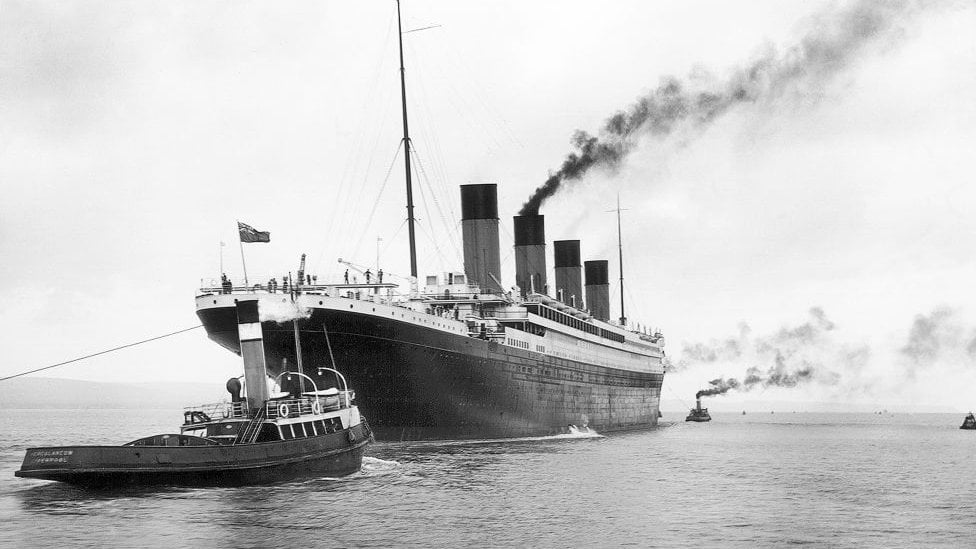 It was night and most of the passengers were asleep when, exactly 110 years ago, an iceberg ended the first voyage of the most impressive passenger ship ever built, the Titanic.

The ship was traveling at 41 kilometers per hour. Less than 3 hours later, she had already become a shipwreck, sunk in the far reaches of the Atlantic on the night of April 14-15, 1912.

Its remains were located only in September 1985: the ship was divided into two parts, separated 800 meters apart, at a depth of 3,843 meters, 650 kilometers from Canada.

BBC News Brazil spoke with experts about some curiosities of this famous shipwreck.

“Not even God sinks the Titanic.” The huge vessel’s reputation as “unsinkable” had his reasons.

“For engineering, the Titanic became famous because it was the first ship to apply a design concept that was intended to segment the ship by dividing it into several watertight compartmentsthat is, if the water flooded one compartment, it could not flood the next one”, explains naval engineer Alexandre de Pinho Alho, professor at the Department of Naval and Ocean Engineering at the Federal University of Rio de Janeiro (UFRJ).

The problem, the professor explains, was that this project ran into the challenge of running pipes and electrical cables along the length of the ship.

“What was the solution? They calculated a reasonable expected limit [de inundación] in case of damage, they concluded that the water would not reach the roofand they created more or less isolated compartments, that is, they made a protection right up to very close to the ceiling”, says Alho.

But the crash with the iceberg was so great that this idea was insufficient. “The tear in the hull extended for half the length of the ship. Under those circumstances, the water reached the ceiling,” he adds.

“The ship entered a condition that we call ‘creeping flood’a point from which there is no longer any way to save it: all the pumps can be activated, all the measures taken, but a greater flow of water cannot be removed than the one that enters”, he contextualizes.

“The project had been advertised at the time as a ‘non-submersible’ ship,” adds civil engineer Thierry Stump, shipbuilder and navigator.

“One of the big defenses was that there were a lot of separate basements, with semi-watertight walls between them, so even if two in a row flooded it wouldn’t be enough to sink the ship.”

“Nevertheless, the iceberg struck the ship broadside and destroyed many cross walls“, he points.

Transportation engineer Aurélio Soares Murta, a professor at the Fluminense Federal University, points out that even the closing system of these watertight compartments ended up not working as planned.

This was due to the strong impact against a material weaker than the steel used today in vessels of this type.

“The shock was so strong that it caused a change in the structure of the ship. The doors couldn’t close, they got stuck,” she says. “Metallurgy back then was different. The Titanic was made from the best steel available, but this doesn’t compare to the steel we have today.“.

Metallurgical engineer Jan Vatavuk, a professor at the Mackenzie Presbyterian University in Sao Paulo, explains that, until the 1940s, ship hulls were made from riveted metal sheets; only later did they become welded parts.

“There was a great evolution of techniques and materials. Welding is a more aggressive process in terms of microstructure change in the molten region, as it places a molten material to join the sheets,” he explains.

“And after World War II, steel began to be manufactured with a lower percentage of carbon and a higher percentage of manganese. It also improved the degree of cleanliness of the materials. Today steel is a more tenacious material, more suitable for superstructures”.

Vatavuk defines contemporary ships as “elastic beams”, capable of withstanding the bending caused by the constant movement of the waves.

“In case of big storms, they hold up well. We have to avoid material fatigue as much as possible“.

But in big accidents you always have to remember that there are human failures. For the experts, in the case of the Titanic it influenced the intense pressure to make the ship go fasteven having to face adversities like a region full of icebergs.

This is because there was a decoration, instituted in 1839, called the Blue Band (Blue Riband), which aimed to recognize and advertise the fastest ships on transatlantic voyages. And the Titanic was the favorite candidate to win the honor.

“At that time, ships were the greatest engineering work that humanity was capable of doing,” Alho points out. “There was a competition between the biggest companies and also between the main shipbuilding nations of the world, in this case, England and Germany. Each one wanted to make the boat bigger and faster.”

The official recognition of that achievement was the Blue Band.

And a ship’s first voyage was the best way to break those records. According to the engineer, this is because that is when the boat “experiences the best conditions for the journey.”

“The hull and propeller are clean, the engines are in perfect condition… The first voyage is a great opportunity to sail as fast as possible. And the Titanic tried to do that,” she says.

There are accounts from survivors that the ship’s captain, even having received the news that there were icebergs in the vicinity, he hesitated to slow downprecisely because he did not want to miss the opportunity to reach his final destination as soon as possible.

3. The brothers of the Titanic

The Titanic was not an only child. At the beginning of the 20th century, the White Star Line company ordered three ocean liners from the Harland and Wolff shipyards in the city of Belfast.

Designed by a world-class team, they were supposed to be the largest, safest and most luxurious ships in the world.

“The projects were widely publicized at the time,” says engineer Stump.

The boats were built between 1908 and 1915 and were called the Olympic Class. The first two to go into production were the Olympic, in 1908, and the Titanic in 1909. The third, originally called the Gigantic, began production in 1911.

Curiously, all three were involved in accidents.

Olympic entered service in June 1911 and, in the same year, collided with a cruiser. She was repaired and started sailing again.

During World War I, the British Royal Navy used the ship to transport troops and the ship crashed into a German submarine in 1918.

He returned to civilian operation in 1920 and was only retired in 1935. He was called the “Old Reliable”.

The maiden voyage of the Titanic began on April 10, 1912. The ship nearly collided with another ship just outside the port of Southampton. On the night of April 14, the historic shipwreck occurred.

Gigantic didn’t have a long run either. She was renamed Britannic and, after being requisitioned by the British Navy, the Royal Navy, she was converted into a hospital ship during the First World War. She sank in November 1916.

Despite being large ships for their time – both the Olympic and the Titanic were the largest ships in the world when they were completed – their dimensions are modest compared to today’s ocean liners.

“It was the giant of the seas. But compared to one today, he looks like a little boat“, Murta comments.

The Titanic was 269 meters long. Between crew and passengers, she housed about 3,300 people.

The largest passenger ship in the world today is the Wonder of the Seas, which is 362 meters long and has a capacity for 7,000 passengers and 2,300 crew members.

The sinking of the Titanic, a tragedy that killed some 1,500 people, set a precedent for the adoption of various safety improvements.

The evolution of technology since then has also contributed to greater security, starting with the use of equipment such as radar.

“A sailor stood at the top of the mast to see if he could see an iceberg. It was a precarious way of preventing accidents, especially with the ship moving at full speed.”

The Titanic ended with many deaths because there were not even lifeguards for everyone.

“As the boat ‘was not going to sink never‘, the number of lifeboats had been halvedAlho says.

“The Titanic accident was a turning point in terms of safety,” says Murta. “After the Titanic, the ships began to have structural standards for their manufacture, safety standards and consistent evacuation plans.”

And of course today radar and sonar They identify icebergs long before a ship finds them.”

“Also, nautical charts, mapping of the seas, everything has become much more sophisticated,” he adds.