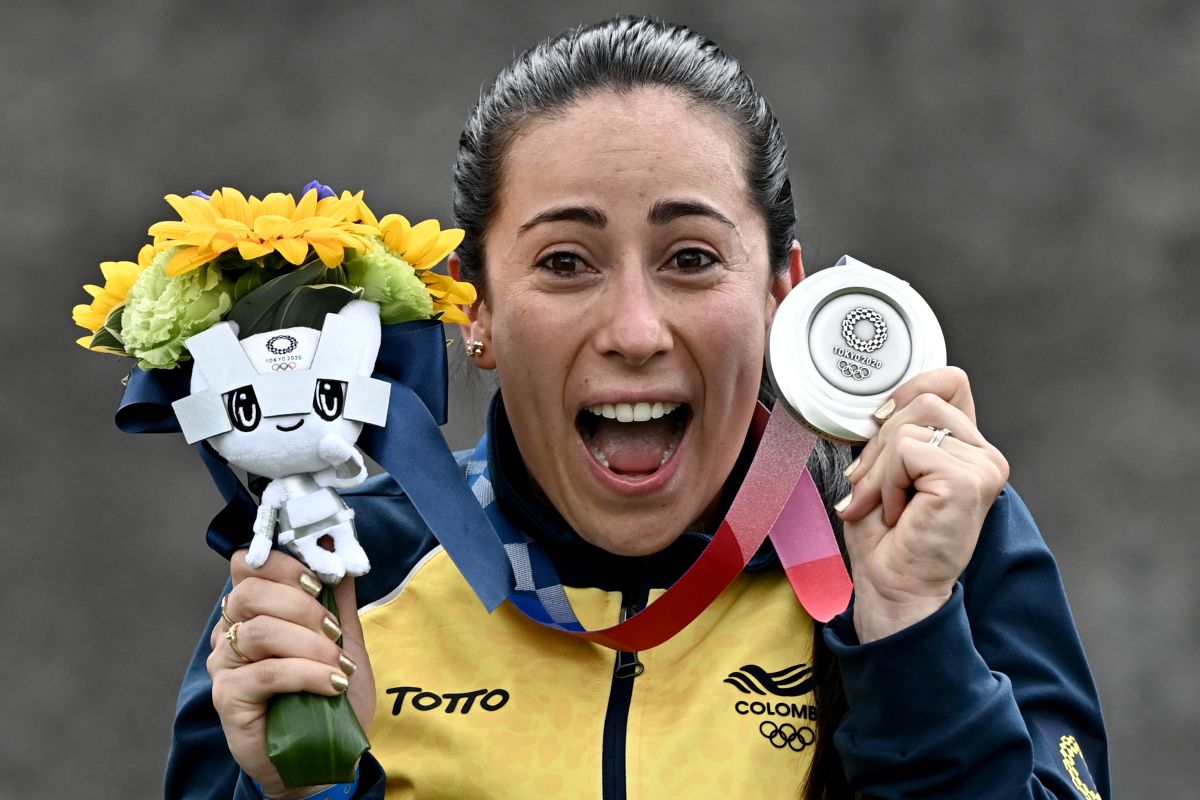 In 45 seconds so many things can happen.

And for the third time, although in this case it did not reach the top of the podium.

And it is that those 45 seconds that lasted the final of the women’s BMX cycling test in Tokyo 2020, where the Colombian won her third consecutive medal -on this time, silver-, showed not only a great athlete but a fighter capable of overcoming a serious injury and a covid-19 infection.

Hence his visible emotion at receiving the silver medal on the podium.

“It is a silver that is worth gold and more”he later told reporters.

She had already faced some difficulties when she was a child and trained on the bike-cross track located in the west of Medellín, the Colombian city where she was born on October 10, 1991 and decided that she wanted to compete.

But back then there was no children’s category for girls. “So I want to compete against the children.”

And he did. And he beat them.

This Friday in Tokyo was only behind the British Beth Shriever, who took the gold. The Dutch Merel Smulders got the bronze medal.

In that subtle way with which he combines a girlish smile with unlimited ambition, Pajón managed to get deeper into the history books of the Olympians.

How did this 29-year-old paisa manage to place herself at the top of Latin American sports?

Perhaps “being the main rival” of herself, as he told BBC Mundo nine years ago for the London 2012 Games where he began to write his Olympic legacy.

The history of great cyclists usually has a “hinge moment”, when they see a bicycle for the first time: for example, the current Olympic road champion, the Ecuadorian Richard Carapaz, relates with emotion that his first bicycle was an old hulk and rusty that he rescued from the trash.

And from there he did not go down again.

Pajón’s epiphany occurred when he was 3 years old. One day he accompanied his older brother to a bike race in Medellín – a relatively new sport that had gained popularity in the city in the 1980s – and he couldn’t help it: he fell in love forever with the jumps, with the adrenaline that give those few moments -less than a minute- that lasts a BMX race.

Then he quickened his pace: he learned to ride a bicycle immediately and to the 4 years old remembers that he already wanted to run.

But there was a problem: there was no category for women in the competitions. It was then that he said that it did not matter, that he wanted to compete “with the children.”

And he began to beat them. In fact, she had to go to the US to compete with girls her age.

Once, at the age of 9, her prowess on the track caught the attention of the media who came to interview her. And in front of the cameras, he disarmed journalists not only because of his childish self-confidence, but also because of his maturity.

“I am very happy because they congratulated me a lot and my mother was happy as if it had dawned,” she replied when asked how she felt about beating children older than her.

The journalist, confused by the statement, countered: “How so, as if it had dawned?”

Pajon, annoyed that she hadn’t understood the comparison, answered firmly.

A dream that began at that very moment to come true.

From that initiatory triumph, Pajón began collecting medals and trophies.

In mid-2003, while she was racing against herself to overcome, in a Swiss city more than 10,000 kilometers from Medellín, a Belgian man named Jacques Rogge, then president of the International Olympic Committee, was going to make a fundamental announcement for her life. : BMX would be incorporated as an Olympic sport from the 2008 Beijing Games.

Pajón was barely 12 years old, but she was in the race to become the most important rider in the history of Colombia, so much so that the women’s category in BMX in her country was already being created.

However, the Olympic status of his discipline put another goal ahead of him.

Due to her youth, she did not go to Beijing 2008 with the competitor’s jacket, rather, he was in a camp that was held in parallel.

But it was that same year that he began to win important titles: the International Cycling Union (UCI) BMX World Championship, held in Taiwan in the category Junior Cruiser female.

It was there that the nickname of the “atomic ant” – that famous Hanna-Barbera cartoon character who was known for his short stature, but also for inexhaustible energy – took hold as his alias. And it was there that he began to be declared a favorite to stay with the medal in the following Olympics, London 2012.

To the British capital he arrived cautiously, because he was barely recovering from a shoulder injury, but the label of favorite, after winning more than 10 world championships, did not bother him.

“I don’t feel pressure… I feel very happy knowing that many people believe in me. That drives me more. It’s positive energy, “he told BBC Mundo at the time.

On August 10, 2012, in the Velopark of the Olympic Village located in East London, Mariana Pajón had the number five on her bicycle and a white shirt that was only stamped with a strip with the colors of her country.

For 34 seconds, her parents, her friends, and her country held their breath. And when they released her it was to give a shout of joy: the girl who wanted to beat hims the children had just given the second gold medal to his country in 116 years of modern olympics.

Rio 2016 and a waiting compass

Four years later, for the Rio 2016 appointment, Pajón was still at the top.

On August 19 of that year, at the Olympic BMX center in the Brazilian city, the Colombian returned to the center of the track to achieve an almost impossible dream: a second consecutive gold medal.

No Latin American woman had ever done it in an individual sport.

Again, his family, his friends, and his country held their breath. Again, for 34 seconds.

Again, letting go of the breath and the nerves, it was only jubilation. Pajon retained the golden dream.

After the triumphs of London and Rio, everything seemed to indicate that it was much more than enough.

In an interview with a Colombian channel, Pajón confirmed that he would only stop practicing professional BMX “the day I feel like I no longer want to be on a bike “.

In 2018 an injury put her to the test: During a world championship competition she had a serious ligament problem and by then there were less than two years left to get in shape for Tokyo 2020.

But what for millions of people around the world has been one of the most complicated moments of life, for Mariana it was a relief: in March 2020, when the World Health Organization gave the status of a pandemic to covid-19, the Olympics Tokyo were postponed.

There was livestock weather.

“They are going to be my third Olympic games and I have fought it a lot, each Olympic cycle has been very special, from London, Rio, now Tokyo, which has had many more challenges than the previous ones. I have had to get up, I have had to wait, I have had to go back to pedaling, learn to walk and be dreaming again, “Pajón told the magazine. People.

“When they tell me that the Olympic games are postponed, the first thing I think is: ‘Thank you very much.’ They gave me one more year to prepare, to recover and to arrive in the best way, “he added.

But another surprise was missing: towards the end of 2020, Pajón announced that he had been infected with covid-19. The preparation had to stop again.

The wait, however, was worth it.

This Friday, July 30, those who stand by their triumphs held their breath for the third time.

This time it was a little longer: 45 seconds. And the first place was not reached, but the second.

But the shout of joy and admiration rang out with great force.