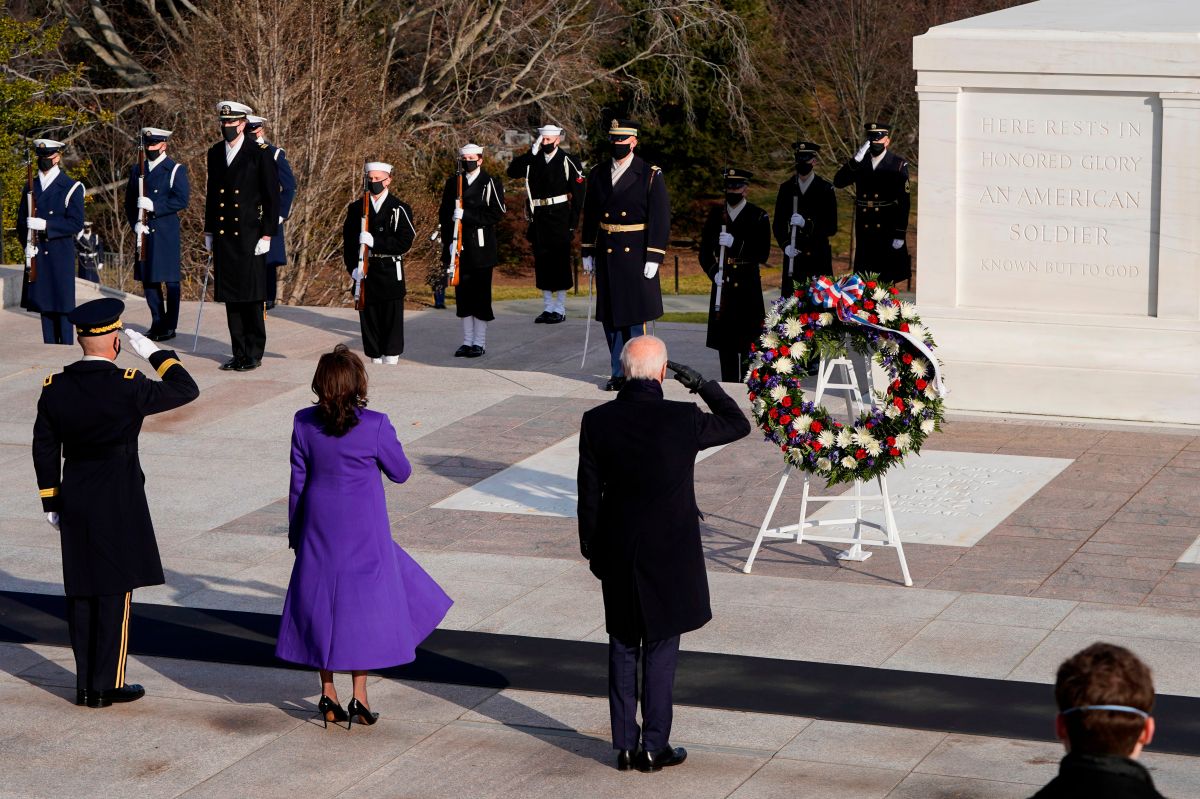 This Tuesday people were dressed for Sunday at the Arlington Military Cemetery (Virginia, USA) to approach for the first time in 73 years the centuries-old grave of a soldier they’ve never met, but that it has played a fundamental role in the construction of the American identity.

The Tomb of the Unknown Soldier in the Arlington Cemetery turns 100 and to celebrate it, the public can approach it this Tuesday and tomorrow, Wednesday, for the first time since 1948, when access to visitors was banned due to the lack of respect and decorum of the people.

A group of people waited patiently in line on Tuesday to approach the white marble tomb, where an unidentified US uniformed man who died in World War I is buriedMen and women of all ages, and even children, waited their turn in silence, as if they were in a church.

Among them, a man dressed in a dark blue suit and red tie stood out. After placing flowers, he straightened his back and head, squared himself and made the military salute at the grave.

The main sarcophagus is in the open air and in front of it there are three slabs under which three other unknown soldiers are buried, one from World War II, one from the Korean War and another from Vietnam, although the latter was identified in 1998 and transferred to another place.

As if it were a rock star, the mausoleum drew crowds on Tuesday to pay tribute to all the military, identified or not, killed in the wars in which the US has intervened.

The Arlington Cemetery Public Relations specialist, Amber Vincent, explained to Efe that this grave is special because it is in the “heart” of the cemetery.

“People can go and pay respect to all the soldiers who have served the country and I think it’s like a foothold for the people, maybe they don’t know any soldier, but they want to show respect,” he said.

The cemetery houses the remains of some 400,000 military personnel and some of their relatives, of which about 5,000 belong to unidentified soldiers.

The site dates from the time of the American Civil War (1861-1865), but it did not begin to be considered a “sacred or special site” in the public eye until the burial of an unknown soldier from World War I.

The historian of the University of Connecticut Micki McElya, author of the book “The Politics of Mourning: Death and Honor in Arlington National Cemetery” explained to Efe that this grave “forged a link between all Americans and the cemetery.”

“He made it a major symbol of patriotism and national honor, while acknowledging the great sacrifices that some have made for this country,” added the expert.

In his elegy, President Warren Harding (1921-1923), under whose tenure the Tomb of the Unknown Soldier was created, described Arlington as “the heart of a nation that mourns its noblest dead,” which, according to McElya, served to unite the large and varied population of the country through mourning and honoring the fallen.

Despite not being military, government officials Matthew Fox and her husband, Bradley, They went to Arlington on Tuesday to lay flowers at the Tomb of the Unknown Soldier.

“Many of us are not in the Armed Forces, but there is someone who is fighting for our freedom and we must come, pay them respect and show the soldiers that we care about them and what they are doing, because it is a great sacrifice”, Fox pointed out, while her husband nodded.

Other people came to Arlington for more personal reasons, such as Frank, a veteran of the wars in Iraq and Afghanistan, who told Efe that his desire was to honor his son, a military man who committed suicide.

For this veteran, who was armed with a black cap that read “Desert Storm” (Desert Storm) the US offensive launched during the Gulf War (1991), The Tomb of the Unknown Soldier is a good way to honor the fallen.

“We have left many people in places throughout various times in history and we do not know who they are,” he reflected. this is a good way to honor them and to remind those who are still serving and those who have retired that we leave no one behind. “

In fact, that was one of the reasons why it was decided at the time to bury an unknown soldier from World War I in Arlington.

McElya stressed that one of the reasons was the policy that, to return the remains of a deceased military officer to the United States, the request of a relative was required, thus not repatriating the bodies of the unidentified soldiers.

“The return of a stranger to represent them was a kind of compromise. It was also inspired by the ceremonial burials of strangers in the UK and France the previous year, ”the expert pointed out.

Despite being described by Harding as “the heart” of America in 1921, Arlington Cemetery, as a reflection of society and the Armed Forces, was racially segregated and the unknown soldier was traditionally considered a white male and straight, proud to lose his life for his country.

As McElya remarked, this representation “excluded a vast proportion of the country and defined a really quite specific universal ideal of the American.”